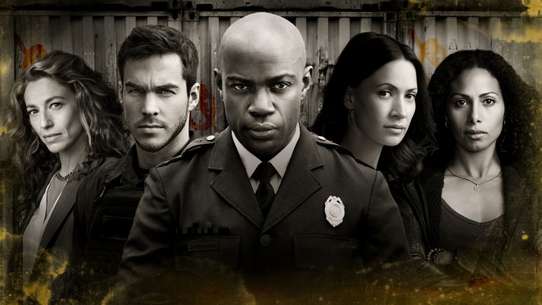 The BEST episodes of Containment

Every episode of Containment ever, ranked from best to worst by thousands of votes from fans of the show. The best episodes of Containment!

The series follows an epidemic that breaks out in Atlanta, leaving the large city quarantined and those stuck on the inside fighting for their lives. The drama tells the story of loved ones torn apart, and how the society that grows inside the cordon reveals both the devolution of humanity and the birth of unlikely heroes.

Lex and Leo clash over their next move after a failed plan threatens to unravel their entire case. When word begins to spread that there may be a way out of the cordon, Jana considers her options. Finally, an unexpected turn of events brings Jake and Katie closer than ever.

When Teresa goes into labor, Jana, Suzy and Sam band together to turn Bitscan into a makeshift delivery room. Meanwhile, after spending some time with Dr. Lommers, Lex grows concerned after noticing a sudden shift in her behavior. Elsewhere, Leo continues to unravel the conspiracy behind the virus outbreak, while Jake stumbles upon some damning information about who may be involved. Finally, fed up with his lies, Katie confronts Dr. Cannerts.

#3 - A Kingdom Divided Against Itself

As tensions reach a fever pitch inside the cordon, mobs of angry protestors take to the streets in an attempt to break free. Meanwhile, stuck in isolation and cut off from their chain of command, Lex and Dr. Lommers have no choice but to stand by helplessly as the cordon erupts into mass chaos. At the hospital, Jake attempts to lighten the mood by taking Katie on a date, but their happiness is short-lived after they discover that several of Katie’s students have gone missing. Meanwhile, with Lex nowhere to be found, Leo moves forward with their investigation, inching one step closer to uncovering the person responsible for the outbreak.

#4 - He Stilled the Rising Tumult

As life outside the Cordon returns to normal, Lex moves forward with an attempt to reveal the truth about a possible government cover-up; Katie and Jake search for a missing person; Xander and Teresa plan their escape.

With only one shot to take Dr. Lommers down for good, Lex carefully plans his next steps. Jana, Suzy, Teresa and Xander make their dangerous escape out of the cordon, but unexpected road blocks threaten to destroy their chance of making it home. Inside the cordon, Dr. Cannerts and Jake make a breakthrough discovery following a risky experimental treatment. Finally, with time running out, Lex is forced to make a decision that will change his life forever.

Lex and Dr. Lommers butt heads over how to pull off a food drop within the cordon; a group of thugs rattles Jake as he tries to control a desperate crowd; noticing the timeline leading up to the outbreak doesn't make sense, Katie looks for answers.

#7 - With Silence and Tears

As things grow more dire inside the cordon, Lex is increasingly frustrated by the false hope he's forced to convey to the public; Jana suspects the situation is more serious than the government is letting on.

#8 - There Is a Crack in Everything

A major breakthrough brings Dr. Cannerts closer to finding a cure for the virus; Katie and Jake discover the truth behind Patient Zero; Jana and Suzy plan to escape the cordon through an underground tunnel system.

Controversial videos depicting chaos inside the cordon prompt Lex to request reinforcements; Katie faces the desperate parents of a student; Teresa is shaken by a robbery at her mother's store.

As Jana, Sam and Suzy pull together the funds they need to plot their escape, Jake considers his own options for breaking out of the cordon. Lex receives cryptic clues from Leo that lead him to an abandoned warehouse outside the city. Elsewhere, a widespread rumor leaves Dr. Cannerts' life in danger. Finally, after seeking shelter at her grandma's house, Teresa makes a difficult decision about her family's future.

Lex learns that a woman who had close contact with an infected patient is missing; Jake's resentment toward Lex causes him to spiral; Katie keeps a watchful eye on her students; Teresa learns her friends may have been exposed to the virus.

An urban quarantine is enforced in Atlanta after a deadly outbreak of a mysterious disease; Lex Carnahan, a policeman, has to keep peace on the streets while doctors race to find a way to stem the epidemic.