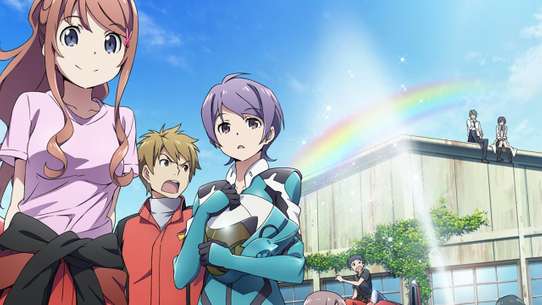 The BEST episodes of Classroom Crisis

With aims to one day reach out into the stars, humanity has colonized all the planets of the solar system. This story of young high school hopefuls is set in Fourth Tokyo in a Japanese Martian prefecture. Iris Shirasaki is a third year student/aspiring test pilot. Mizuki Sera is her peer/mechanic and Mizuki's brother Kaito is their homeroom teacher and the young director of the program developing their talents.

#1 - The Greatest Presentation in History

Nagisa is on course to collide with a satellite! Iris is the only pilot who can save him, but she has to overcome her own fears first!

#2 - To Each His Own Rebellion

Iris recovers from the X-3 accident while Kaito learns of Dr. Li's dream world and Kazuhisa talks with Nagisa about his plans.

#3 - The Transfer Student Who Came in Late

As Kirishina company executives reacted and planned a response to news involving a hostage situation, another school day began for members of the A-TEC class, excited for a new transfer student coming in. Kaito Sera, the homeroom teacher for the class, raves to the academy president about their new prototype rocket, the X-2. Later in the day, it is revealed that the new transfer student is the hostage, and the class executes a rescue mission to the asteroid he is being held at using the X-2. The mission succeeds, with the rocket being destroyed in the process, and the transfer student reveals himself to be the Chief of the Advanced Technological Development Department, Nagisa Kiryu.

The day before the general election, Nagisa contacts Director Yuji Kiryu, telling him to turn on the TV and that his plan is now underway. The candidate for the Seimin party, Furabayashi, moved over to the Oozora party, to most people's confusion, with the party declaring their support for him, abandoning former candidate Murakami. Upon hearing the news, A-TEC's students feel like their souls have been crushed, as the candidate that pledged to support them is all but out of the running. Angelina reveals Nagisa's plan to A-TEC, showing that he persuaded Furabayashi to change parties at the last moment. Kaito berates Nagisa, stating that he's disappointed in Nagisa, and that Nagisa doesn't seem confident in his actions. Yuji Kiryu loses his position as director, and the CEO, Kazuhisa Kiryu, prepares for an oncoming battle with Nagisa.

Nagisa rejects a request for additional funding, telling Kaito that with his back against a wall, he should become more innovative. Later, Nagisa fails the class exams, criticizing the subjects taught in the class. Nagisa fails the makeup exams that afternoon as well, and decides to stay afterwards to attempt to study. Mizuki comes to offer her assistance, while Kaito goes drinking with A-TEC's former chief. Both groups begin a conversation about Nagisa's upbringing. Nagisa is not truly a member of the main Kiryu family, and his brothers treat him terribly as a result. Nagisa is also the last living member of the Shinomiya family, which formed Kirishina alongside the Kiryu family, putting Nagisa in an interesting position in company politics. With the help of the entire A-TEC class, Nagisa passes the makeup exams.

The Oozora Party plans to form a coalition with South Cross. Since Nagisa is now the Managing Director at the Kirishina Corporation, he tries to convince the Board of Directors to revoke the dissolution of A-TEC.

Yuji explains the reasoning behind what he did to Nagisa. Kaito and the gang try to come up with a plan.

While the students are finishing up the X-3 engine, they realize they need a final, very expensive piece. Angelina (a.k.a. Hanako Hattori) and Iris attended a pilot conference, and miss their flight back to Mars. Nagisa arranges for the two of them to board a private company plane, carrying a famous space engineering professor. Hanako and Iris realize the space plane has been hijacked, which is relayed to Nagisa and Director Kiryu. Nagisa doubts that the director will handle the situation and asks A-TEC to save them. With A-TEC's help, Hanako and Iris secure the cockpit and set course for Mars. A hijacker tries to shoot at Iris, but the shots end up shattering the front window. This triggers an old memory within Iris, becoming helpless as the plane veers on a crash course. Suddenly, an unknown ship saves them, while Nagisa is perplexed as to who sent that ship.

With general elections coming up, the two largest political parties, Seimin and Oozora, use favors within Kirishina to rally support for their respective candidates. The students prepare their attraction for the upcoming school festival, a rocket being propelled by a pressurized bottle of water. While testing the rocket, Iris has flashbacks of a terrible memory, and becomes sick. Nagisa asks Iris if not knowing her past bothers her, and she responds that she has nothing to complain about. The students' festival attraction goes over fairly well. Nagisa and Hanako try to figure out why money budgeted for A-TEC keeps disappearing, and after meeting with Director Kiryu, his suspicions are confirmed, and he begins to set his plan in motion.

With all but 5 leaving, the remaining students feel demotivated and powerless. By chance, Kaito is struck by the idea of bringing their problem to the labor union, which decides to support their cause. Kaito and the students begin participating in union events, but it soon becomes apparent the union is using Kaito's name to try to gain political power. Nagisa promotes Kaito to Assistant Chief, rendering the labor union unable to help him any longer, and they leave him. 5 more students return to A-TEC, inspired by the group's perseverance. They find a loophole in company regulations that allows Kaito to use his executive promotion to acquire funds to keep A-TEC running.

#11 - The Woman Came From the Accounting Department

Director Yuji Kiryu, Nagisa's brother, tells Nagisa that he has slashed A-TEC's budget by seventy percent, which Nagisa argues against. The students begin work on repairing the X-2 prototype. They then encounter Angelina rummaging through their office, and she interrogates and harasses them. Angelina later tells Kaito that she was summoned by Nagisa to reduce A-TEC's spending. She pressures Kaito into agreeing to the budget cuts, on the condition that she will not fire the students, and as a result, she moves their working space to an older, worn-down garage, angering the students. Nagisa discusses his secret plans with Angelina, and he realizes that Director Kiryu's seventy-percent budget slash was made up.

#12 - The Shame of the Journey Overrides

Director Kiryu is becoming more agitated by Nagisa's attitude and actions. The entire A-TEC class goes on a graduation trip to a beach, although Nagisa stays out of the fun activities to complete important company work. Whenever Mizuki tries to coax him into joining the group, the electronic devices he uses end up broken somehow. A standoff between Angelina and Iris reveals that Angelina knows of Iris's amnesia. Late at night, Nagisa is left with no devices left to be able to access the company server, so Mizuki steps in to help. She enlists Iris, racing fast against time, to drive Nagisa to a company branch office where he can access a computer and finish his work. Mizuki discovers scars on Nagisa's back later that night.

The students, especially Mizuki Sera, try to welcome and be friendly towards Nagisa Kiryu, only for him to be cold in response. He announces to the class that he is now the chief of A-TEC and that the program will end within in a year. The next day, although Nagisa cancelled class, the students still gather and discuss Nagisa's past history and speculate what his plans are. While watching a past interview that was conducted with him, Kaito Sera becomes reinvigorated and storms into Nagisa's office to declare that he will do what he can to keep A-TEC going.