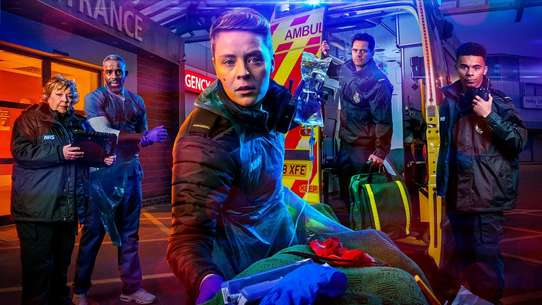 The BEST episodes of Casualty

Every episode of Casualty ever, ranked from best to worst by thousands of votes from fans of the show. The best episodes of Casualty!

Casualty is a weekly television show broadcast on BBC One, and the longest running emergency medical drama television series in the world. Created by Jeremy Brock and Paul Unwin, it was first broadcast on 6 September 1986 and transmitted in the UK on BBC One. The producer was Geraint Morris. The programme is based around the fictional Holby City Hospital and focuses on the staff and patients of the hospital's Accident and Emergency Department.

A crazed woman's attacking mini-cab drivers and Megan's husband, Ted, picks her up and he nearly becomes her next victim. Charlie and Baz argue over private health care, as Rose Sherman finds she can't bribe Ewart. Nurse Trish tells Duffy she's emigrating for better conditions and a safer life after being attacked. Megan finally tells Ted about her operation and Duffy prepares for her driving test.

A troublesome reporter and a head injury case put the staff under pressure. Kuba turns on Clive for drinking on the job and a motorway pile up causes the death of two people. A woman with a guilty secret breaks her silence and the police break into her home to find her aged father dead.

A group of vigilantes runs riot on an estate and the Casualty team go to tend to the injured but some troublemakers follow their friends to Holby and start a fire. The staff struggle to save themselves and their patients.

Ewart's got the backing of the staff, as he fights the department over the closure of Holby and a meeting's held at Megan's house to determine there strategy. Kuba saves a man being attacked by a another man, wielding a baseball bat and a suspected case of Lasser Fever, closes the casualty department down until the patient's transferred to an isolation unit. Charlie throws a party to cheer everyone up and next day a demonstration to make the public aware of the closure, is held outside the hospital.

Megan's smuggled back into casualty as she awaits her operation and Charlie and Baz are getting serious. When three teenagers break into a house and experiment with alcohol and drugs, tragedy strikes and Baz faces the wroth of the dead youth's relatives. A man dressed as Spiderman and a suicidal woman tax the staff and Ewart's thrown into turmoil with the sudden arrival of her daughter.

A local boxing match ends in tragedy when the winning boxer's found unconscious afterwards and becomes Baz's patient. Charlie teases Andy's extra martial liaison with Sandra and Duffy confides in Megan about her rape ordeal. Ewart's on hand to attend to a breach birth and Susie gets pestered by a drunk man. A wounded policeman and a drug addict are attended to, as the brain damaged boxer has to be transferred to another hospital for a scan.

Andrew and Sandra are having an affair and Duffy failed her driving test. An old man collapses and his friends are determined to be with him until the end. A drunk driver hampers an ambulance taking a car crash victim to Holby but the staff discover he's been fatally shot. A boil on a bum, brings a cocky young man down to size by Baz and Duffy and Ewart's distraught when his daughter becomes a patient.

Metal thieves attempt to steal copper from a railway line, only for one of them to be injured and taken to the ED - leaving the other two to cause an accident that derails a train. Among the passengers is a boy being packed off to boarding school and Tess, who must fight to save the youngster's life. But when she becomes trapped herself, Fletch makes a massive sacrifice to save her. Back at the hospital, Connie spends her first day as clinical lead, Ethan and Lily make up, and Cal is still in the doghouse

Sam's rash decision to man the ED himself during the staff strike comes back to haunt him when Roy Ellison's wife and son turn up at the hospital, and discover what has happened to him. The Ellisons quickly prove that violent behaviour runs in the family, and when their actions on the ward become unacceptable, events begin to spiral out of control. Meanwhile, Iain and Jez find Lily unconscious in the car park, after Gem accidentally hit her while driving erratically. Racked with guilt, Gem decides to hand herself in, but Lily's prospects remain grim

New mother Annie, skateboarder Richie, white-collar worker Chris and teenager Fiona are admitted with sickness and dilated pupils. The race is soon on to get to the bottom of the mystery as their conditions get worse. New nurses Lloyd and Scarlet find it hard to cope with the emotional demands of their positions.

Sam throws herself into helping an old soldier and his son in an effort to distract herself from the GMC interviews.

Jordan's date with Yvonne is put on hold when a former ED patient nearly dies in the cells, but who is at fault, and can Jordan and Yvonne's relationship survive the investigation?

The day of carefree porter Max and senior consultant Zoe's wedding finally arrives, but it seems someone has developed cold feet. The drama continues at the reception when a drunk Louis lashes out at Max, and in all the commotion, a flame heater is knocked over, resulting in a deadly blaze. Meanwhile, back at the ED, a patient blames Louise for causing her miscarriage when she treated her as a nurse at another hospital, and Dylan tries to bring his anxieties under control after being diagnosed with obsessive-compulsive disorder.

Dylan and Tess must treat an agitated pregnant woman, while Fletch tries to unravel the relationship between a teenage girl and her swimming coach.

Medical drama. Fletch plays a practical joke on Lloyd after a staff night out, and Dylan attempts to teach a medical student about the dangers of alcohol abuse.

Hospital drama. Connie tries to help a father come to terms with his son's sexuality, while Cal helps treat a severely paranoid patient.

Connie deals with a case too close to home; will she and Grace find a way through?

Zoe's first day as the ED'S clinical lead gets off to a trying start when the team are faced with dealing with the aftermath of a tunnel collapse at a music festival.

Ethan and Fenisha are running late for their big day, and Tina’s manipulation of Jacob continues.

Jacob and the rest of the paramedics come to Connie and Grace's rescue and a helicopter is sent for the doctor's daughter. Meanwhile, Charlie celebrates his 30th year at Holby City Hospital.

Dylan creates a scene in front of his colleagues when he hits back at staff nurse Lofty, so Connie gives him one day to prove he is fit enough to carry out his medical duties. Tess's son Sam visits the hospital and introduces her to her first grandchild, meaning she has a difficult decision to make. Meanwhile, after helping Max out with options for the big day, Big Mac is overjoyed when he is asked to be best man at his wedding to Zoe, and Ethan takes the opportunity to ask Honey out after her unsuccessful date

Louise confronts Jez about his infidelity, but when he comes clean and reveals his secret squeeze is Mickey, she is left stunned. A revelation about the events of the previous week leaves Ethan reeling, and Charlie makes it is personal mission to restore the spirits of everyone in the ED

Dixie tries to help an unstable mother, Suzy, who is grieving for her baby, but soon suspects that she has abducted another one to replace her own, leading to a dramatic turn of events that puts Suzy and the child's lives at risk. Cal reluctantly teams up with a leukaemia patient to work together to raise money for charity by producing a nude calendar, while Charlie finds Louis trying to take heroin and takes him to see the body of a dead addict for shock therapy, leading Louis to issue one more cry for help