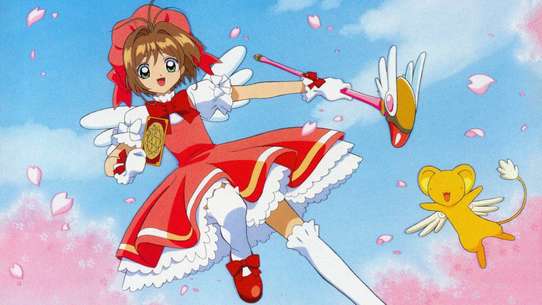 The WORST episodes of Cardcaptor Sakura

Sakura Kinomoto is appointed Card Captor by the Guardian of the Seal, Kerberos, when she accidentally opens the magical book of Clow Cards and scatters them to the four winds. To protect the world from disaster she must capture all of the Clow Cards with the help of her friend Tomoyo and Kerberos.

Sakura is finally about to go and read to children with Yukito, and she invites Akiho, Syaoran, and Tomoyo to come along. Sakura's enthusiasm convinces Akiho to join her for the reading, while Syaoran agrees to contribute a piano accompaniment.

Sakura continues to face the hooded figure in her dreams. At school, everyone says they want to hear Akiho sing again after being charmed by her voice at their flower-viewing party, so they meet in the music room after classes are over.

Sakura has been invited to Tomoyo's house, along with Meiling and Akiho. Tomoyo says there's something she wants to show them and leads everyone to her home theater, where she plays the video of a play they were all part of in elementary school.

#4 - Sakura and the Sleep Labyrinth

Akiho pays a visit to Sakura's house one evening while her father and brother are both away. They look at Sakura's elementary school pictures and have dinner together, but then Akiho suddenly falls asleep.

#5 - Sakura Feels a Pull at the Flower Viewing

Sakura is having a flower-viewing party with her friends Tomoyo, Syaoran, Chiharu, Naoko, and Yamazaki, as well as the new transfer student Akiho.

#6 - Sakura and the Upside-down Penguin

Syaoran meets Kaito through a chance encounter on the way home from school. He informs Eriol, whom he's beem secretly keeping in touch with, and they both begin to suspect Kaito is a very powerful magician.

#7 - Sakura, Yukito, and the Midday Moon

Sakura and Yukito participate as a two people team in the quiz tournament. As they get to the 10th question which is the last, Ms. Mizuki warns them about the full moon tonight. They go in the forest and then suddenly Sakura becomes dazed and begins to fall off the cliff. Yukito dashes to Sakura and covers her while his leg becomes injured.

It's been raining buckets all day. Sakura and Tomoyo take shelter in a park on the way home from school, and suddenly the Key of Dreams at Sakura's chest begins to shine... Is it the work of a card?

#9 - Sakura and the Mammoth Test of Strength

Sakura's class is visiting the zoo for a field trip and her group is assigned to observe the elephants. Near noon, something begins to break open the cages causing chaos among the visitors and Kero is positive it's a Clow Card.

Sakura and Kero-chan visit Tomoyo's house to test the abilities of the Record card. Tomoyo's mother appears and gives Sakura an enthusiastic welcome, then the girls head outside to test the card.

#11 - Sakura and the Icy Ball-Sports Tournament

It's the day of the ball-sports tournament everyone's been looking forward to. The athletic Sakura makes a strong g showing in the basketball event!

It's the new term, and the hot topic at school is clubs! Sakura and Tomoyo decide to join the same clubs they did in elementary school, cheerleading and chorus.

Sakura finds out that Akiho has moved into the mansion formerly inhabited by Clow Reed's reincarnation, Eriol. She pays a visit with Tomoyo and meets Kaito, the butler who's been taking care of Akiho since her childhood.

Sakura is spending her Sunday morning making rolled omelets for the homemade lunches she's taking for her outing with Syaoran.

#15 - Sakura and Welcome Back, Meiling

Sakura is overjoyed to see Syaoran's cousin, Meiling, make an unannounced visit from Hong Kong. Meiling asks to stay at Sakura's house, so they head straight there. Meanwhile, the power Toya lost by giving it to Yukito is gradually starting to return.

Sakura invites Syaoran out for the day with tickets given to her by her father. She's worked hard on the rolled omelets for their lunch, and now they make their way to the aquarium Sakura visited when she captured the Clow Card, Watery.

Sakura has captured the Fly card but is still reluctant to take on the role of the Cardcaptor in spite of Cerberus's encouragement. However Sakura has yet to find that she has an adoring fan who will support her calling as the Cardcaptor. Furthermore there's a Clow card causing havoc at the school.

#18 - Sakura and the Fire and Water Birds

When Sakura senses a card late at night, she heads to Tsukimine Shrine with Kero-chan, Tomoyo, and Syaoran.

Sakura’s fourth grade class takes a trip to the town’s ice skating rink. At the ice skating rink, the students begin to feel low, freezing temperatures due to the Freeze card. Eventually, the Freeze card beings to freeze everyone by covering them with ice, except those with magical powers, which include Sakura, Syaoran, and Ms. McKenzie, who was hiding near the back of the rink during Freeze’s appearance. With the help of Syaoran’s distractions, Sakura is able to capture the Freeze card into a clow card and ultimately, Syaoran became the master of the Freeze card due to his idea of getting Freeze to appear out of the ice rink.

#20 - Sakura and the Lovely Transfer Student

A new transfer student named Akiho Shinomoto joins Sakura's class. She's just arrived in Japan after living overseas, so her Japanese is still very stiff and formal. Sakura invites her to eat lunch with her group, excited to make a new friend.

#21 - Sakura and the Strange Magic Book

Sakura is just a normal fourth grader attending Tomoeda Elementary School. One day after school, she finds a mysterious book in her father's library called "The Clow". When she touches it, mysterious cards fly out, an a strange creature name Kero comes out. He reveals to her that now, she must re-capture all the cards, or else the world could be in serious trouble.

Sakura manages to capture the card that showed up at Tomoyo's house, but her relief is short-lived. As they're returning home, Sakura and Meiling are suddenly attacked by a mysterious girl in the road!

Today is the cooking lesson in home ec class that everyone's been looking forward to. Sakura's morning is thrown into a panic when she forgets her apron, but she and her friends are excited to make roll cakes in class.

While cleaning the house, Sakura finds two dormant Clow Cards, the Wood and the Rain. But while running an errand for her father, the two cards activate creating a jungle inside the house.

Sakura is invited to Tomoyo's home for the first time. She is shocked to find Tomoyo's house to be an elaborate mansion complete with its own maids. Tomoyo presents a special chest and explains the key to the box bounces out whenever she tries to open it. Kero senses it's the work of a Clow Card!