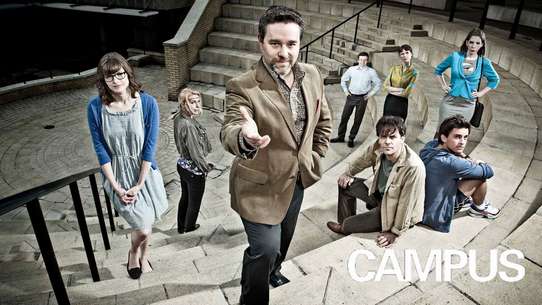 The BEST episodes of Campus

Every episode of Campus ever, ranked from best to worst by thousands of votes from fans of the show. The best episodes of Campus!

Campus is a British sitcom first broadcast as a television pilot on Channel 4 on 6 November, 2009, as part of the channel's Comedy Showcase season of comedy pilots. It is a semi-improvised sitcom set at a fictitious university called Kirke University and follows the lives of some of the staff. The pilot has been compared to an earlier Channel 4 sitcom, Green Wing: a semi-improvised sitcom set in a hospital which is written by six of the same writers as Campus.

No one's job is safe, it seems. Apart from those whose jobs are safe, of course. Hard work, diligence and not telling whopping great fibs on your CV should see you right. So not looking great for Lazy Prof Matt or Accomms, Officer Nicole.

The arrival of a restructuring guru, in the shapely shape of George Bryan, sends a chill wind up many a Kirke trouser leg. A fully paid-up member of the 'slash and burn' school of downsizing, George appears without heart or soul. In an act of crippling desperation, Jonty enlists Matt's help to 'melt' the Ice Maiden.

#3 - The Final Preliminary Report of Doom

The Day of Reckoning. Stomachs and hearts are in knots as George prepares to deliver the bad news. 'The News' however, turns out to be not quite what they anticipated, leaving everyone with a new set of ever more complicated problems to unpick.

As George puts the finishing touches to her Final Report, Matt is plunged into total crisis over his recent shenanigans and the thought that he might actually have genuine feelings for another member of the human race. Imogen suffers her own inner turmoil about an ill-advised coupling and only Flat seems perkily sure of what he wants.

Philandering English Professor, Matt Beer, is on a mission to woo icy business consultant George into knee-trembling, resolve-weakening, book-cooking submission. Flatpack embarks on a little wooing of his own, and even Accountant Jason is feeling a certain 'stirring' around gay best friend Nicole.

Reactions from members of staff range from nonchalance to panic when Jonty announces his plans to give Kirke University's bank balance and academic reputation a boost. Jonty, titillated by his mousy Maths Lecturer Imogen Moffat's success, insists all the staff take a leaf out of her best-selling book.