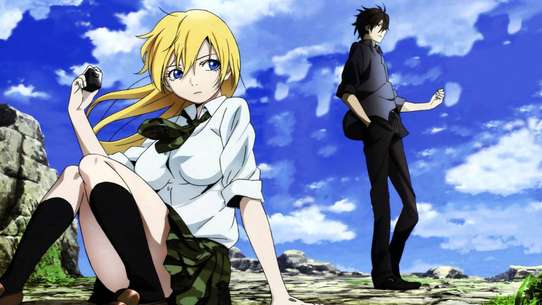 The BEST episodes of Btooom!

Every episode of Btooom! ever, ranked from best to worst by thousands of votes from fans of the show. The best episodes of Btooom!!

Sakamoto Ryouta is an unemployed 22-year-old who lives with his mother. In the real world, there may be nothing really special about him, but online, he's one of the world's top players of the combat game Btooom!. One day, he awakes on what appears to be a tropical island, though he has no memory of how or why he has come to be there. While wandering around, Ryouta sees someone and calls out for help. The stranger responds by throwing a bomb at him! Now Ryouta realizes both that his life is in danger and that he has somehow been trapped in a real-life version of his favourite game! Will Ryouta be able to survive long enough to figure out how and why he ended up here?

Miyamoto, the mercenary, has found Sakamoto and his team. This dangerous player will do anything it takes to win.

Kira Kosuke is a disturbed child, but when on the island his true nature can finally come out, unchecked. That is until he faces the best Btooom! player in Japan.

A new player has joined Sakamoto's team, but he carries a dark secret. Before the team could dive deeper into the new players past, a food drop overhead brings many players out of hiding.

It seems the players on the island are interconnected in more ways than one. While Sakamoto mulls over this new information, the good doctor begins his end game.

With Ryouta out of the way, Himiko will be an easy target for Date, but Shiki has other plans for the doctor.

A pantless corpse floats by Taira and Sakamoto while they are eating lunch. When Sakamoto leaves to investigate he finds a gruesome scene and a familiar figure.

In the moment of danger, trust issues start to show between Taira and Sakamoto. Sakamoto wants to save everyone especially the girl who just tried to kill him.

While chasing after the mysterious girl, Ryota runs into Taira Kiyoshi who helps fill in the blanks in his memory.

Taira has lost it and is attacking his friends. Ryouta doesn't want to fight but this time he truly might not have a choice.

A typical high school girl, betrayed by her neighbors, a forced player in the game of Btooom!, betrayed by the group she teamed up with. All men are scum.

Ryōta Sakamoto is ranked #10 worldwide in Btooom!, an online game where players kill each other with bombs. After a game one day, he mysteriously awakes in a real life version of the game.

As Sakamoto and Himiko try to rest for the night, Himiko wrestles with the idea of telling Sakamoto her true identity, but before she can do anything she is visited by a “ghost”.