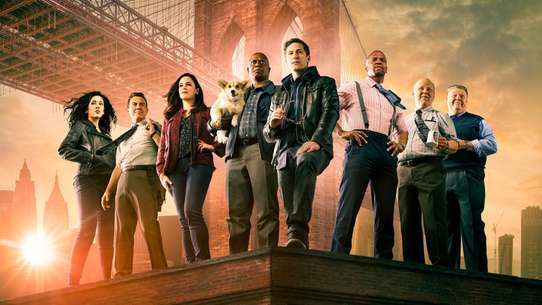 The BEST episodes of Brooklyn Nine-Nine

The lives of an eclectic group of detectives in a New York precinct, including one slacker who is forced to shape up when he gets a new boss.

The squad takes stock of their eight years together and looks toward their future.

Jake and Amy's wedding day is majorly threatened, and Charles and the whole squad rush to help save it. Amidst the chaos, Holt hesitates to open the email that will indicate if he has won his campaign for Commissioner, despite Gina's encouragement. Meanwhile, Terry gently pushes Rosa towards a potential love interest.

The entire squad is on high alert when a massive blackout hits Brooklyn.

Jake and Amy go undercover to catch Brooklyn’s most notorious identity thief, and the case brings them closer together – very close. Meanwhile, the entire precinct is caught off-guard when one of their own says goodbye to the Nine-Nine.

Jake embarks on an all-night long interrogation in order to elicit a confession out of a suspect. But when Captain Holt skips the opera in order to stay back and help, the two cops clash over how to get him to talk.

Jake’s investigation of philanthropic civic leader Lucas Wint is shut down by Commissioner Podalski. Still determined to crack the case, Jake enlists Amy and a reluctant Captain Holt to help him uncover more evidence, to help him uncover more evidence, even if it means facing suspension. Meanwhile, Charles is devastated over pre-marital problems with Vivian, and Gina knows just how to cheer him up.

The Nine-Nine embarks on its fifth annual Halloween Heist and, as usual, everybody has a plan and no one is safe. Relationships and friendships are tested as the title "Amazing Human Slash Genius" must be snagged by midnight, leaving everyone pitted against each other.

After a surprising turn of events in the Nine-Nine’s attempt to track down Adrian Pimento’s hitman, the precinct drops everything when they suspect Holt is in danger.

The third installment of Captain Holt and Jake’s Halloween heist culminates with a tie-breaking competition to claim the title of “amazing detective slash genius.” This year, Jake and Holt split the squad into two teams to help them win.

Jake, Charles and Gina are involved in a real-life “Die Hard” situation while off-duty on Christmas Eve, and Terry must leave his family celebration to try to save his squad. Meanwhile, Amy tries to prove she’s just as tough as Holt and Rosa.

In order to distract Terry from the stress of his upcoming lieutenant’s exam, Jake, Holt and the squad decide to hold the annual Halloween Heist on a new date, Cinco de Mayo.

Jake and Amy’s ongoing bet about who can make more arrests comes to a close. Meanwhile, Charles receives the Medal of Valor for getting shot in the line of duty, but the pain medication he is taking causes him to reveal his true opinions about his colleagues.

With Pimento’s life still in peril, Captain Holt calls on an old friend in the FBI to help with a seemingly impossible heist. Meanwhile Amy makes a breakthrough while undercover, and Terry and Gina discover an information leak in the Nine-Nine.

Desperate circumstances call for desperate measures, as Jake, Holt, Amy, Terry, Rosa, and Charles must ally themselves with old enemies.

When investigating a serial killer, Jake enlists Holt’s help in an attempt to solve the case off the radar. At the precinct, Rosa and Amy are forced to deal with demands from an old adversary and Terry discovers a new obsession.

It’s Halloween in the Nine-Nine, which can only mean one thing: heist time. This year, the squad members pull out all the stops in their quest to win the new defending title of “Ultimate Detective Slash Genius.” Lines are drawn and plans are made, but there can only be one reigning champion.

The Peralta / Holt annual Halloween bet continues when Jake challenges the Captain that he can steal his watch before midnight. Meanwhile, Gina is upset that her dance team, Floorgasm, kicks her off the squad and Terry confronts her about her bad attitude.

Holt asks for Jake's help in a case that is exceptionally meaningful to him. Charles and Terry work together on a side business.

After Seamus threatens Kevin, Holt devises an elaborate plan to hide him in a safe house, with Jake as his guard. Kevin is miserable as the 99 works overtime to find Seamus and take him down.

At Amy's intricately planned Thanksgiving dinner, Jake goes "full Santiago" (binder and all) in order to impress her father, a former cop. With Jake and Amy's focus elsewhere, Charles is left on turkey duty and Holt helps Pimento cope after learning he can no longer work for the NYPD.

With only one fugitive still on the loose, Jake enlists a surprising ally.

While the entire precinct attends a funeral in LA, Holt learns that he is in the running to become Chief Commissioner of the NYPD - his dream job. But after missing their flight back to New York, Jake must devise a variety of ways to get Holt back in time for the interview. Forced to stay with some estranged members of the Boyle family, Amy tries to convince everyone that she can be laid back, Terry panics about losing his first-class flight and Charles uncovers some new information about Rosa's personal life.

Jake and Charles investigate a case of Hitchcock and Scully’s from the 1980s. Amy’s uniformed officers and Terry’s detectives fight over limited resources.

A mass escape of convicts from a prison van in the streets of Brooklyn sends the entire squad on a manhunt. The only key witness? Former NFL running back Marshawn Lynch. Meanwhile, Jake and Amy place a bet on who can bring in the most escaped convicts - and the loser has to move into the winner's apartment.

Holt is wary when Wuntch lets Jake work his dream case, worried that she is setting him up to fail. Back at the precinct, Amy, Rosa and Gina help Terry host a field trip for a local magnet school.