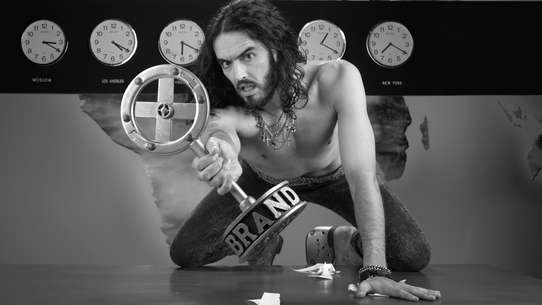 The BEST episodes of Brand X with Russell Brand

The series premiere of Brand X, FX's new late-night comedy starring acclaimed actor/comedian Russell Brand, will debut, at 11:00 PM E/P. The series features Brand's unvarnished, unfiltered take on current events, politics and pop culture. The network has ordered six half-hour installments of the series that will be shot in front of a live audience. The format will draw heavily on Brand's interaction with that audience. The series is produced by FX Productions in association with Branded Films and Dakota Films. This marks the first television deal for Branded Films. Executive Producers are Russell Brand, Troy Miller and Nik Linnen. Miller also serves as Director of the series. The series was originally scheduled for the spring, but was pushed to the summer due to a film production starring Brand.

#1 - The People Have Spoken

The English comedian debated two members of the homophobic far-right group, while his audience shouted admonishments at their anti-gay rhetoric. Russell Brand did the seemingly impossible: He brought together the Westboro Baptist Church and gay men on the same stage. Of course, it took a little bit of deception to do it. The WBC, run by Fred Phelps and known for protesting military funerals with signs splashed with anti-gay slogans, sent two members to Brand X, Brand's new show on FX. As the audience booed the men and their condemnation of homosexuality, Brand called for respect for the church members for their willingness to come to hostile territory.

A late night talk show in which comedian Russell Brand shares his unvarnished, unfiltered take on current events, politics and pop culture. The six installments will be shot in front of a live audience and the format will draw heavily on interaction with that audience.