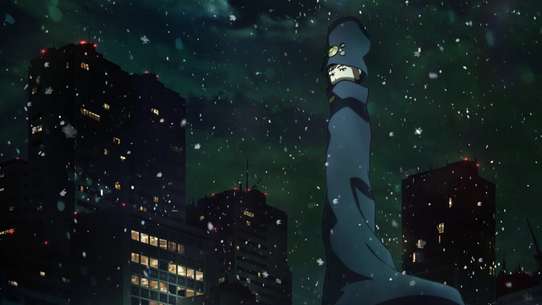 The BEST episodes of Boogiepop and Others

There is an urban legend that tells of a shinigami that can release people from the pain they are suffering. This "Angel of Death" has a name—Boogiepop. And the legends are true. Boogiepop is real. When a rash of disappearances involving female students breaks out at Shinyo Academy, the police and faculty assume they just have a bunch of runaways on their hands. Yet some students know better. Something mysterious and foul is afoot. Is it Boogiepop or something even more sinister...?

Nagi prepares to fight with Kisugi Makiko. Now that Kisugi is not human, there's a good chance Nagi won't survive this fight. Mo Murder knows the odds of this fight and ends up doing something very much out of his character. Meanwhile, Nagi tries to lure Kisugi Makiko away from the hospital so there won't be any other victims. Kisugi attacks Nagi and tries to get her to fear but...

#2 - Overdrive: The King of Distortion 3

Niitoki Kei is progressing through the Moon Temple along with Boogiepop. According to Boogiepop, it's definitely true that something is endangering the world right now, but they don't know just how dangerous it is at the moment. Boogiepop explains that things aren't that simple and that they're not sure if the King of Distortion is actually an enemy yet. Kei's stomach suddenly rumbles in the middle of their conversation and Boogiepop offers her a very cute looking bento.

Private Investigator Kuroda Shinpei's true identity actually a synthetic human named Scarecrow who works for a secret organization. His true mission is to track down any MPLS. MPLS had abilities that surpassed any human. One day, a fellow synthetic human named Pigeon brings him a new mission. His new mission is to investigate the entrepreneur Teratsuki Kyouichirou. Despite having some doubts about this mission, Kuroda looks into Teratsuki and discovers a hospital he donates to...

Masaki wonders where he's been looking this whole time after he finds out the truth about Orihata and begins to desperately look for her. He finally manages to get through to her phone, but Orihata asks him to leave her alone. Masaki refuses to give up and tries to track down where she is. He gets to Paisley Park and...

#5 - Overdrive: The King of Distortion 2

Teratsuki Kyouichirou and a pregnant woman sit drinking in a bar, and he offers her money if she keeps the child, even though she does not know who the father is. Some time later she gives birth to Makoto Hashizaka and she is shown to be the same woman waiting in the queue earlier with her son. Later, Sakiko a girl trapped in the Moon Temple meets her dead school friend Hina along a railway line and apologises for offending her years ago. Habara Kentarou meets Nagi Kirima in a café who warn him about his computer hacking activities. However, Habara realizes that it is an illusion and that they are still in the Moon Temple. Habara wakes himself up and finds that everyone in the temple is unconscious, all having their own dreams influenced by the King of Distortion which he suspects is part of Teratsuki's original plan.

#6 - Overdrive: The King of Distortion 4

Tanaka Shirou finds a place in the floor that looks like it may lead somewhere else, so he and Habara Kentarou want to go explore it, but Sakiko was asleep on top of the entrance. They manage to wake her up and manage to get into the crawlspace, but nothing there seems to have any connections with the King of Distortion. Suddenly, the entrance closes and Sakiko yells at them, saying that she won't let them get in the way of the King of Distortion. The entrance now won't budge, leaving Kentarou and Shirou trapped. Then, they hear the sound of something shutting...

One day, Kirima Seiichi receives a letter from a young man who says he's about to be killed. The young man thanks Kirima for his books, saying that they helped him out quite a bit. But now, he's become an enemy to society, so he was going to be disposed of. Kirima then asks his friend to look into the source of the letter. They find out that the young man indeed died the day after he sent out the letter and it's discovered that he had some extraordinary power.

#8 - Overdrive: The King of Distortion 5

Tanaka Shiro is worried about Kamikishiro Naoko because she disappeared, so he went to ask Niitoki Kei from the disciplinary committee for help. Kei just figured Naoko was skipping again, but Tanaka tells her that Naoko had her reasons for not showing up to school. Saotome Masami happens to hear them talking and tells them that they should talk to Kirima Nagi. Naoko and Nagi are good friends and she might know something. The three of them then go to look for Nagi.

An eccentric billionaire named Teratsuki Kyouichirou created a strange building called the Moon Temple before he died. The purpose for its construction was unknown, so they decided to open it to the public to view to try to gain some money to help pay for its cost. Takeda Keiji happened to be waiting for his girlfriend Miyashita Touka nearby and Tanaka Shirou was visiting the tower because he had once promised Kamikishiro Naoko that they'd go together someday...

Everything started on the day when Kirima Nagi, who had been diagnosed with an unknown, incurable disease, made a sudden recovery and Makiko found remnants of some kind of medicine in her room. Kisugi Makiko began various experiments with this medicine and gained extraordinary powers. Soon after, there is news of a number of girls dying mysterious deaths. The number of victims climbs to 5 and the suspect still hasn't been caught...

Suema Kazuko finds out that Kinukawa Kotoe's attitude has changed ever since she had requested Suema to help her with Asukai Jin. Suema can't help but feel that there's something deeper at play with Kotoe's sudden attitude change, and she goes to visit Asukai to see if she can find out the truth. Suema asks him if he's sure he doesn't know the reason that Kotoe changed, but Asukai just changes the subject and starts talking about his own personal goals.

In order to go to high school in Japan, Kirima Nagi's half brother, Taniguchi Masaki, returns to Japan. Masaki gets advice from his sister to not stand out as much at school, but ends up gathering some grudges from some of the kids at school. He gets surrounded by some students and a girl calls out to them. Orihata Aya seems to be offering herself up in Masaki's place. Because of this encounter, the two of them start to get closer, but...

Asukai Jin teaches at a prep school and also acts as a guidance counselor to the students at that school... but he was also born with a strange power. He was able to see what other people were missing in their hearts. He could see plants within their hearts. Everyone had something missing from their plants, such as leaves or roots. However, he couldn't do anything about what was missing in their hearts, so he tried to help them by telling them what they needed to hear. One day as he's walking home, he encounters a woman named Minahoshi Suiko, who calls herself the Imaginator.

One day after school, Kinoshita Kyouko asks Suema Kazuko to walk home with her. As they're walking along the river going home, Kyouko asks Kazuko if she knows another way home. Kazuko teases her, asking her if she thinks someone's going to kill her. Kyouko stays silent and Kazuko tells her she's overthinking things, when suddenly Kirima Nagi appears before them. Nagi then pins Kyouko to the ground.

Kotokawa Kinue approaches Miyashita Touka and Suema Kazuko as they study at one of the tables at the prep school. Kotoe asks Kazuko for help and tells her that Kyouko was the one that referred her. Kotoe asks Kazuko to help her cousin Asukai Jin, who is one of the instructors at the prep school. Apparently, he used to worry a lot about various things, but stopped worrying and would stay out late at night and come home with blood stains on his clothes. Kazuko says she'll accept the job and decides to investigate.

Takeda Keiji was waiting for his girlfriend and junior in school, Miyashita Touka. But she doesn't show up at the time they agreed on and he can't get a hold of her. The sun starts to set and Takeda decides to give up and head home. But then, he sees a man unsteadily wandering around with tears in his eyes. Takeda and the other people around him quickly realize the man is not normal and decide to ignore him when a mysterious figure approaches the man. A mysterious figure wearing a cape and a bizarre hat. That figure happened to have the same face as Touka, the girlfriend who ditched Takeda...

Due to Orihata's request, Masaki dons a black hat and cape and goes around acting like Boogiepop. It had been two weeks since they started using Orihata as bait to lure bad guys in so Masaki can beat them up like a superhero, but Masaki still had no idea why they were doing this. Masaki mentions that they can't do this forever, but Orihata just tells him that she'll do anything for him. All he has to do is tell her. Slightly annoyed by Orihata avoiding the question, Masaki says he'll continue acting as Boogiepop, but...