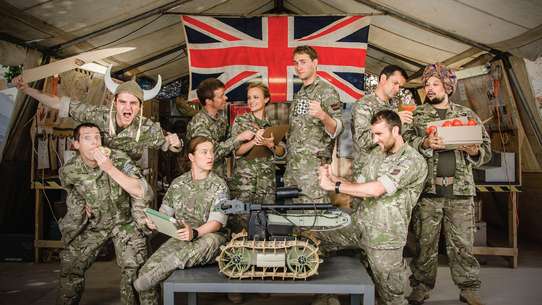 The BEST episodes of Bluestone 42

Bluestone 42 is an eight-part comedy drama about a British bomb disposal detachment in Afghanistan. It is a series about a bunch of soldiers who love being soldiers, and the camaraderie, bonds and banter they share, even though they are risking their lives defusing hidden bombs.

An unwelcome blast from the past knocks Nick off his game, and has a dangerous effect on the rest of the team. Simon tries to prove to Nick that he will up his performance in close protection skills by being VERY close to Nick, as often as possible. Mary’s movie night and Bird’s Boogie Night clash, and the pair find themselves locked in a popularity battle. Towerblock, meanwhile, tries to prove that Mac is in denial about his sexuality.

Nick needs some peace and quiet so he can focus on building a forensic profile of the Taliban bomber, but his team are constantly annoying him. He is delighted when he finds a disused roof terrace, but he has a challenger for the spot. Mac is distraught when he finds out his Dad is dating his high school crush, much to Simon's delight. Meanwhile Towerblock hatches a plan to scare Bird with Rocket's new pet rat.

Nick regrets showing off to his new number 2, Towerblock. Simon and Bird come to blows over a special book belonging to the Lt Colonel.

Graham, the new robot, is brazenly stolen from under the noses of Bluestone 42, which proves useful in Nick's hunt for the Taliban bomber. Bird finds herself the reluctant participant in a 'girlie chat' as Mary battles with her feelings for Nick. Meanwhile, Simon loses a key part of his rifle and his lack of trust in Mac and Rocket comes back to bite him.

As the team prepare to leave Afghanistan for good, Simon receives some devastating news.

Nick is stuck looking after a Government Minister who is visiting the base, but offloads the duty onto Mary. He soon regrets it when she unexpectedly takes a shine to him. Nick's attempts to keep the Minister away from Mary just make matters worse, especially as they involve high explosives. Simon, meanwhile, takes it upon himself to become an over-zealous Fire Officer for the base.

Bird is so fed up of Nick going on about Mary that she decides to take action, but the result is not quite what she planned. Simon tries to prove himself at first-person shooter, but his late night practising starts to mess with his head. Meanwhile, the Lt Colonel somehow persuades Towerblock to pimp his ride.

The team suffer a Taliban attack on base, which distracts Ellen and Bird from their bickering and Towerblock from a difficult phone call to his wife.

Nick is called in to rescue a squaddie during a major operation and he soon realises that this might not be straightforward and things take a worrying turn. Lt Col arranges a base pub quiz, and sends Mac and Rocket on a wild goose chase in an effort to cheat their way to victory.

An IED explosion has hit Bluestone 42's mastiff, and they are trapped in hostile territory. Not everybody comes out of the vehicle unscathed and the team faces a difficult dilemma.

Ellen has to learn to bend the rules, Mac and Rocket do gladiatorial combat and Bird sets Simon up for a fall.

Captain Ellen Best arrives and her presence affects Bluestone 42 in very different ways. Bird feels hostile towards her, while Simon is utterly infatuated. Her by-the-book approach is tested after Lt Col steals the team’s fridge and after the team suffer an attack she is forced to make a difficult decision.

Nick tries to prove to the padre that he is not superstitious. Simon tries to earn respect by joining in dangerous homemade games with Mac and Rocket.

Mary reveals a secret about her past before she became a padre and Nick tries to take full advantage. Bird is offered a promotion.

Nick faces a challenge with a booby-trapped car bomb. Simon stands up to his fiancée.

A mortar attack on the patrol base sends Bluestone 42 diving for cover.

After Bluestone 42 join a midnight raid on a bomb factory and rescue a kidnapped Danish aid worker, they find more than they bargained for. Simon tries to get a book deal for his memoir.

Nick and Simon help each other to learn to dance, whilst the arrival of vet Parikh reveals Bird as a terrible flirt.

The Bluestone 42 team are called out on routine ops with their CIA liaison officer Carter, where things take a drastic turn. Back at base, they are introduced to Mary, the new padre, who Nick, the Ammunition Technical Officer, takes an instant shine to. Meanwhile, Simon grapples with Millsy over the report that Nick has forced him to write on his behalf, and the young Privates - Mac and Rocket - enjoy winding up Bird who may or may not have named the bomb seeking robot 'Arthur'.

Nick has grown tired of eating the same food every day and is desperate to find something tastier. Mary encourages Nick to let Millsy run a re-training exercise. Millsy is ecstatic and ensures he does a very thorough job, much to the disdain of the team.