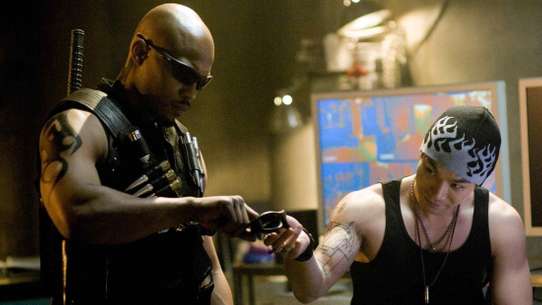 The BEST episodes of Blade

Every episode of Blade ever, ranked from best to worst by thousands of votes from fans of the show. The best episodes of Blade!

On the mean streets of Detroit, an ancient evil is growing bolder by the day. The House of Chthon is on the verge of eliminating the final barriers to their supremacy over mankind, and only the Daywalker can stop them. Half human, half immortal. His only allies are a master weaponsmith and a woman obsessed with revenge against Chthon. And he will stop at nothing to win his war, because he is the ultimate vampire hunter. His name is Blade.

Blade and Shen learn that the White Prince, an infamous vampire and serial killer, has made a resurgence and is working out of a Detroit nightclub. Blade sends Krista into a detox after she feeds off of Marcus. And Charlotte makes a deal with Chase.

Krista hunts down Boone through their spirit connection, while Marcus sends Chase to Berlin to track down one of Dr. Vonner's pregnant patients - a woman whose child-to-be harbors a dark secret. Blade follows Chase to get the woman first, while Marcus reveals the secret of Aurora to Krista.

After her mother's death, Krista becomes increasingly disconnected from both Marcus and Blade. Blade finds out about the liquid that was taken from Vanessa, while Damek makes his move on Marcus.

Marcus makes the final move on the Purebloods and also discovers the whereabouts of Blade's and Shen's main hideout. This leads to a final showdown between Marcus and Blade as well as Krista and Chase!

Agent Ray Collins and Blade team up to take on the vampires. Marcus finally makes his move on the Purebloods by first going after Charlotte first and then the Conclave.

Blade tries to solve the murder of a cop named Flanigan who helped care for him while growing up. Flashback scenes tell how Blade's father brought in Abraham Whistler once he could no longer do anything about Balde's need to feed. Krista copes with her mother's critical condition.

Krista gets some bad news about her mother. Marcus tries to find a way to get Vanessa back from Blade and sends Krista to Berlin to do so.

Lisa Starr, now a vampire, is on the loose and it's up to Blade and Krista to find her and give her the serum. Chase gets in touch with a old flame name Alex and he wants her to leave Marcus.

Krista wakes up to face the realities of her vampire state, and Marcus and explains the rules pertaining to the Houses. Blade seeks out Rev. Carlyle to get a lead on the vampiric-ash trade, then uses Krista to get information on the super-vampire Fritz.

Blade is caught by a group of vampires called Bad Blood and Reverend Carlyle is in on it. Krista is heading to the House of Leichen, so she can have a vision to find Boone.

Blade and Shen track down a vampire name Sands, who was used in Marcus's experiments. Krista visits her mom for the first time being turned, she also tries to get a sample of the vaccine and accompanies Chase to a AA meeting.

Krista Starr returns home from Iraq, and it's not long before she finds out her twin brother Zack, has been killed. She hunts for the man that killed her brother. Blade is also hunting for the same man, which Krista and Blade team up to take down, but things don't turn out so good for Krista.