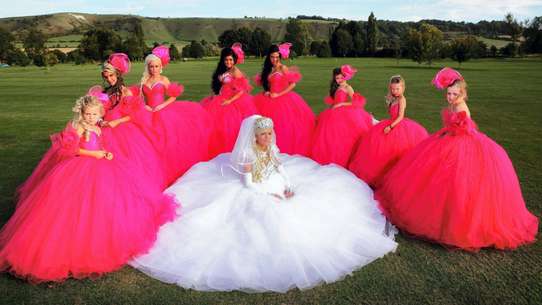 Revealing documentary series that offers a window into the secretive, extravagant and surprising world of gypsies and travellers in Britain today

Romany Gypsy Pat faces criticism for marrying a non-gypsy. But his bride Sam is determined to prove her Gypsy girl credentials with a 14-stone dress that lights up in the dark. With 21 underskirts and moving diamante butterflies, it weighs more than the bride's father. Six-year-old Mary Ann lives on Europe's biggest traveller site, Dale Farm in Essex, which is home to more than 1000 travellers. With a site eviction looming, Mary Ann's mother Margaret hastily arranges the celebration for her daughter's first communion.

This episode looks at the milestones in a Gypsy girl's life leading to the biggest day of all - her wedding. From first Holy Communion (described as a 'dress rehearsal for her wedding day') to the strict rules of courtship, a hen night and, of course, the spectacular wedding itself, this episode examines the traditions and rules followed by Gypsy and traveller girls in Britain today.

While Gypsy and traveller women want to be a princess on their wedding day, the reality in the Gypsy community is that on every other day it is man who is king. This film looks at the testosterone-filled world of the traveller man, where disputes are settled with fists, and status is conveyed by the car you drive. Ex bare-knuckle boxer Paddy, the patriarch of a traveller site in Salford, explains the role of a traveller man and, crucially, how he earns enough to keep wife Roseanne happy.

A look beyond the enormous wedding dresses, sequins and tiaras to unveil the lot of a Gypsy woman. It's not all just about having blingtastic nuptials. With literacy and education largely deemed unnecessary and domestic abuse startlingly common, the contrast between the daily life of a gypsy girl and the glitz and glamour of their wedding day is stark. Does it all come down to the Cinderella-style wish to be a princess just for one day?

21 year old Delores is an Irish traveler who lives the high life. From driving a Porsche along the beaches of the Spanish on a coast to heading back to the ultra-wealthy traveller town of Rathkeale in County Limerick, we see her as she prepares for the biggest day of her life - her wedding day.

The importance of honour and reputation in traveller communities, featuring Priscilla, who ran away with a boy at the age of 16. She was forced to marry him to avoid a scandal, but despite having two children with him their marriage was a loveless one and she left him after six years - losing all ties with her family in the process. Gay traveller Mikey discusses his experience of coming out as he attends Gay Pride with his friends, and the programme also meets Rosanne, a 17-year-old Irish girl who deliberately spent time away with her boyfriend to force her parents to bring her marriage forward. Elsewhere, 2011 Celebrity Big Brother winner Paddy Doherty and wife Roseanne throw a New Year's Eve party to celebrate a life-changing 12 months

Christmas is a time for family, a time for peace and harmony - but it is also a time to celebrate. This film follows the celebrations and traditions of members of the Irish traveller community at Christmas, as well as two of the most jaw dropping weddings ever shown. Filmed last year, the programme follows a mass-Yuletide First Communion ceremony. It also follows some of the unique traveller preparations that go on in the run up to Christmas, and spends Christmas Day itself with Paddy and Roseanne at their home on a traveller site in Salford.

Irish Traveller Danielle who is determined to live her life in a traditional way, so at just 15 years old, she is planning a lavish black pink and bling hen party. The only problem is her intended groom, 20-year-old Brendan, is up in court on the same day; if he gets sent to prison both the hen night and the wedding will have to be put off.

What happens when two different worlds are joined together in marriage? This episode explores the cultural divide between Gypsies and non-Gypsies.

Fifteen-year-old Santana is planning a lavish 16th birthday party, to include a 16-tier cake decorated with fireworks.

This film visits the annual Appleby Horse Fair and examines the prejudice against the travelling community in Britain today. Discrimination is nothing new to the traveller community and their secretive seclusion from mainstream society seems to be their only defence.

At Dale farm, after 10 years of court battles, eviction approaches for 80 families.