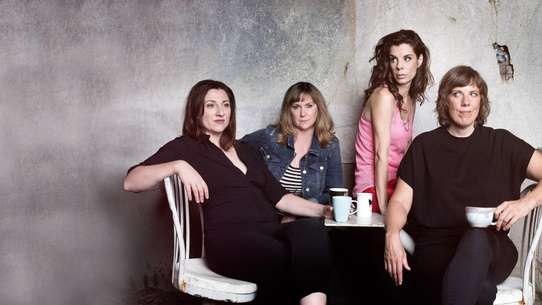 Carolyn Taylor, Meredith MacNeill, Aurora Browne and Jennifer Whalen star in this series that takes a comedic look at our narcissistic contemporary culture. Fast paced and irreverent, Baroness von Sketch Show is a single-camera comedy, shot on location, that offers a witty take on everyday concerns. From the politics of ordering a coffee to entitled coworkers to open relationships, this satirical sketch show holds a fun house mirror up to modern life.

The politics of escaping the Titanic; that friend who always wants to dance; birthday wishes get too personal.

#3 - It Satisfies on a Very Basic Level

Being single post-apocalypse, the ultimate birth plan, it's an Unhappy Valley for this police officer. Featuring: Mae Martin

There is no such thing as a quick question. Red Wine Ladies go to a wedding. The dangers of the dance circle.

A pharmacist goes on a power trip; a hot date is interrupted; the politics of wearing flippers at the pool.

Something special happens to a woman on her 40th birthday; the miracle of dry shampoo; maybe visiting your therapist at home isn't a great idea.

A mission to Mars doesn't go as planned; the odious side of open relationships; straight women flirt with a lesbian; Moms say, "Hello."

A little gossip between caring friends, a bit of sexual housekeeping and making the perfect campfire are featured. Jon Dore guests.

A trip to the vet for cat lovers; queer theory gets personal; friends try to get out of godmother duty; office birthdays are the worst.

Topics include: it's an upside-down world for women, legal ramifications of the scrunchie, and peri-menopause.

Cottage Rules; the importance of punctuation; what Air BnB hosts hope will happen.

Ad execs struggle with a campaign to market women's soap; writing a sympathy card proves difficult; how far is too far at the cottage?

A Space Jumper gets cold feet; officer workers cannot get sick; a Mother and Daughter Talk gets real.

No one wants to be a gay cliché. After 40 you're gonna want to exclusively drink white wine. A fierce manicure.

Binging on drama, what to say at a funeral and a corporate listening circle are featured. Gavin Crawford guests.

An unwanted gift, bad bangs cut deep and energy heeling at the rock store are featured.

Tips on preserving an open bottled of wine; the girls tell a stranger to smile; a discussion on co-parenting.

#21 - Start By Having Rich Parents

When grammar feels bad, a shy boyfriend and running out of toilet paper are featured.

Jan brought snacks. Some people can wear anything. The famous last words of Emily Dickenson.

Ups and downs of vet visits, a close shave before birth and seating at Thanksgiving are featured. Lea DeLaria guests.

You need something stronger than pot; the naked truth about keeping up with the neighbors; when a baby won’t stop staring.

The art of maximizing the buffet. Fragrance free workspace is a nightmare. Finding the quiet room at the party.