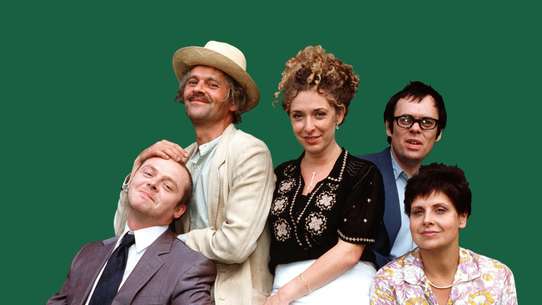 The BEST episodes of Big Train

Every episode of Big Train ever, ranked from best to worst by thousands of votes from fans of the show. The best episodes of Big Train!

Big Train was a surreal British television comedy sketch show created by Arthur Mathews and Graham Linehan, writers of the successful sitcom Father Ted. Following in the tradition of Monty Python, the comedy of Big Train is based on the subversion of ordinary situations by the surreal or macabre. Its stars included Kevin Eldon, Mark Heap, and Simon Pegg in both series one and two, with Julia Davis, and Amelia Bullmore in the first series, and Rebecca Front, Tracy-Ann Oberman and Catherine Tate in the second series.

A tale of love involving a potato and the first television screening of a classic.

The difficulties of being a police sketch artist are uncovered and there is an alternative interpretation of the famous film 'Matter of Life'. Adolf Hitler is in an unusually jovial frame of mind and the World Stare-Out Championships continue with Nanak versus Duran.

Dracula and the Werewolf discuss co-worker the Mummy and Beefeaters riot on the streets.

The merits of programmes are discussed by a panel of late-night pundits.

A babysitter gets more than she bargained for when she looks after Dame Margot Fontaine.

The World Stare-Out Championships reach a thrilling climax as Kampagnola takes on Spatsky. Florence Nightingale is shown in a whole new light, a group of office workers react to the appointment of their new boss and Chairman Mao is found in another unusual setting.

Unwilling policeman; something's spooked the jockeys; My Name is Paul, I'm 52-and-a-half-years-old; (costume) cat and mouse fight; The Monk and the statued nipple; wanking in the office; jockeys in the will being preyed-upon by The Artist Formerly Known as Prince; "I've turned into a ventriloquist's dummy"; Stare-Out Stare-Break; Small Train, Big Hand, Size-Perception Issues; horse suicide; dating agency - going for the opposite to normal type of date; postman-hitman; hypnotists; Stare-Out Richard Gere; uh-huh-huh, hu-huh, uh-uh-uh-huh-huh.

A visit from Darryl Hall and John Oates to a deprived council estate causes as much anger as optimism. A daredevil embarks on some crazy antics and Chairman Mao is in 'Top of the Pops' mode. The World Stare-Out Championships features Wallace versus Popstopolous.

Woman asks for directions in France in English; the boss who continually escapes his employees chasing-up of owed bonuses; the Inquisition; the 43rd stare-out world championships, disturbed by a streaker; Jesus vs. Satan (office bullying); radio dj using child slave labour for puns; The Bee Gees gunfight with Chaka Khan; surgeon taking a call at an inappropriate moment; childlike adults dressed for the hunt but wanting to be firemen.