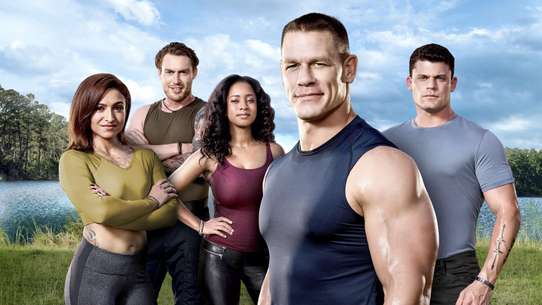 The BEST episodes of American Grit

Hosted by WWE Superstar John Cena, Grit pits teams of men and women against each other to win millions in prize money as they face military- and survival-themed challenges.

WWE Superstar John Cena™ informs the teams of their next challenge, during which they will complete four grueling obstacles, collecting a tire at the end of each completed course.

Changes in game play increase the stakes, especially with a double elimination on the horizon.

17 new competitors head to Hampton Island, Ga., where the Cadre will be divide into two teams as the competition begins.

The winner of the next challenge gets a visit from a family member in what proves to be a very special and surprise reunion.

After an upsetting elimination challenge, it is decided that the contestants need some tough love; gossip raises tension back at camp.

The teams tackle a foot race through the muck while roped together at their waists. Later: the winning Cadre leader chooses three competitors from the losing teams to face off in a double elimination

The next challenge is revealed and the losing teams must send one team member to compete in "The Circus."

The first team challenge arrives and the winning cadre leader selects three rival contestants to do battle in the individual elimination challenge, with one contestant going home.

Survival skills, decision making and teamwork are tested as the contestants create shelter, purify water and build a fire in their next challenge.

The competitors' strategic skills and teamwork are put to the test as they are challenged to cross a 60-yard field without their feet touching the ground.

The cadre appoint team captains, who lead their teams in a boat race while their teammates are blindfolded. Later, one contestant makes a shocking revelation; host John Cena surprises one competitor with a heart-felt field trip; and three rival contestants face off in the elimination challenge.

After an upsetting elimination, WWE® Superstar John Cena® decides to spend quality time with the remaining contestants and reveals personal information about himself. During the challenge, contestants are surprised when they discover that they must remember everything John told them in order to win. With a double elimination ahead, the competition is at an all-time high and the final four are revealed. Then, after one contestant is faced with having to decide who leaves the competition, the final three enter the ultimate challenge. While all might have found their grit, only one can walk away with a quarter of a million dollars and be the winner.

The remaining contestants learn that they will need to be mentally and physically prepared to dive right into their next mission at any point.

WWE Superstar John Cena and the cadre challenge the competitors to break down and set up camp.

The competitors are challenged to memorize and recreate specific sets of symbols in order to test their observation and communication skills.

WWE Superstar John Cena and an elite group of mentors push 16 contestants beyond their limits for prize money worth up to a million dollars.

The contestants only have two options: to persevere and win up to one million dollars or give up, “ring out” and go home.