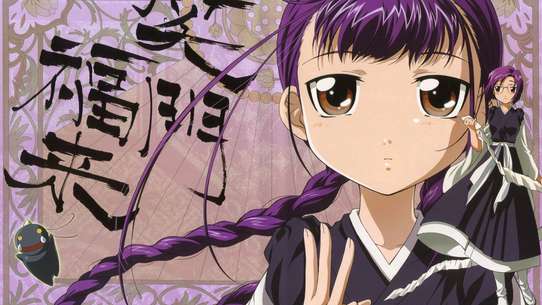 The BEST episodes of Ah! My Buddha

Hatanaka Ikko, a 16 year old boy, is a first year trainee at the Saienji Buddhist Temple. He was sent there by his parents to be trained by his grandmother, the Saienji Priestess. At the temple he finds himself surrounded by beautiful female priestesses-in-training. Upon seeing a girl naked, Ikko has the ability to turn into a super-monk, performing massive exorcisms for the good of the temple.

Jotoku send Hinata and Ikkou to Saichouji, Miyako's temple to allow Hinata to overcome the Six States' manifestation of darkness, her bosatsu, the demon realm. Chitose, Yuuko and Sakura follow them to the temple to be found out by Miyako and sent back to Saienji. Hinata succeeds in suppressing Ikkou after he has awakened to Miyako's dirty play.

Hinata, Ikkou, Chitose, Sakura and Kazuki go on a haniwa excavation together. Kazuki shamelessly seduces Ikkou but is constantly thwarted by her fanboys. In a rage, Kazuki accidentally releases an evil spirit, a giant haniwa. Hinata is forced to make her little demon into a monster to destroy the spirit.

Jotoku sends Ikkou, Hinata, Sumi, Yuuko and Chitose to an old man in the mountains, because they're going to help him with cleaning his temple. The gang are persuaded by the hot springs at that temple. When they arrive, they are given arduous chores by the monk. The gang enjoys the hot springs. Hinata and Sumi notice someone watching them. It is revealed that the spirit is controlled by two rogue monks, who are against Jotoku and want to use Ikkou's "Holy Priest" power. Chitose prevents Ikkou from awakening while Sumi and Hinata successfully exorcise the spirit.

The Christmas special. Ikkou tries to exorcise a spider-spirit without awakening but fails. Later the gang is assigned by Jotoku to exorcise Santa Claus on Christmas due to a train accident 45 years ago. Sakura's recantation of the sūtra does not exorcise Santa and is forced to allow Ikkou to awaken. The gang eat cake afterwards.

Yuuko receives a love letter from a boy and tries to hide it from the others. The rest of the gang are suspicious Sakura guesses correctly that she received a love letter. Yuuko gets a free sample of make-up and tries to use it with disastrous results. Haruka puts the make-up on Yuuko for her. The next day, Yuuko's classmates notice her cute side. After a run-in with Ikkou, she decides to reject the boy and continue living in her tomboyish ways.

Master Devil, Hinata's pet, tries to jump from a bridge and kill himself, because Hinata only paid attention to a new kitten she rescued from dangerous dogs. Hinata and Ikkou manages to convince Master Devil not to jump. The kitten was turned into a demon by 2 mysterious men. Hinata tries to awaken Ikkou by stripping herself, which fails. The rest of the gang arrives and Master Devil strips them of their clothing to awaken Ikkou to exorcise the demon in the kitten. The kitten is given away and Hinata's relationship with Master Devil has been improved.

Ayako is the ghost haunting a recording studio. Her creepy voice has been recorded into some CDs and the studio request help from Ikkou and Chitose. Ayako said she died in a car crash before she made her debut album so she became a restless ghost. Ikkou tells Chitose to lend Ayako her body to sing. With the cooperation of the studio, Chitose/Ayako's album was ranked first and Chitose is invited to sing publicly. On the stage however, Ayako refuses to pass on because she has not sang it to her love interest. Jotoku brings her boyfriend to the stage and Ayako passes on.

Chitose is determined to keep Ikkou from needing to awaken to exorcise. Ikkou is chosen to perform the Joya-no-Kane, ringing of the bell 108 times at New Year's Eve to negate the 108 human desires. The other are deal with the visitors. An excessively large amount of spirit gather during the ringing of the bell and Ikkou faints as he strikes the bell the last time. Chitose volunteers to protect Ikkou but is nearly raped. Ikkou wakes up and comes to Chitose's rescue, using the power of the holy priest to exorcise all the spirits gathered without awakening. He faints again afterwards.

Sakura's & Chitose's class competes with each others in a food selling contest in an annual festival. The winner will receive food tickets for a year. During the festival, a spirit, who frequents Sakura's homepage, sees her at school. Sakura takes him to go to all the booths in the festival. After the festival, the spirit is able to rest in peace and disappears.

Ikkou, Chitose, Sumi and Yuuko are now second-year students. Haruka and Sakura became third-year students, with Sakura being the new school council president. Hinata became a first-year student. Hinata received a charm from each of the other girls for the school entrance ceremony. At the ceremony, Kazuki represents the first-years and makes a speech. During her speech, the spirit of the school council founder creates strong winds to lift up all the female students skirts. He is subdued by five members of the Amaenaideyo gang. However, Kazuki releases him and forces Ikkou to awaken to exorcise him.

Chitose's love for horror movie is shown when she forces Sumi, Ikkou, Hinata and Yuko to watch them with her. A little girl requests help from the gang and they enter a haunted house. Chitose narrates the scenarios that occurred in the respective rooms and scare the wits out of Sumi, Ikkou and Yuko. It is revealed that the little girl is a spirit and Jotoku punishes them for not realising that sooner.

Ikkou and Chitose clean the temple while the rest of the gang is doing high school club activities. Ikkou and Chitose sneaks into town at night to go to karaoke together. They later go to an arcade to get their photo taken. As they try to leave, earthbound spirits stop them. Chitose gives them a sermon and they are exorcised. When Ikkou and Chitose meet Jotoku and the gang, Jotoku punishes Ikkou for disappearing from the temple.

After a swim class, the girls find that only bras and underwear of C-cup girls and above are taken from the locker room. Ikkou is the prime suspect is relentlessly question by the girls. A friend of Ikkou, Yagani, reveals his feelings for Sumi and wants Ikkou to help him make Sumi instantly love him. The underwear thief is revealed to be a spirit and Jotoku orders the gang to exorcise the spirit after school. The spirit is Yagani and is exorcised after Ikkou awakens.

Ikkou awakens to exorcise a ghost in the temple. Jotoku punishes him for needing to awaken. Chitose ignores him for seeing her naked. Later, a doll begins to haunt a doll memorial service, and Chitose exposes herself to Ikkou so that he can awaken.

After a week of training at Saichouji, Hinata and Ikkou are required to go into Danda Cave, one of the few places close to hell, to complete Hinata's training. Hinata manages to relinquish her ties to her demon associates, with exception of the little demon, for her sister's love. Worried about Hinata and Ikkou, the rest of the gang go to Saichouji to meet them. When Jotoku finds out that the girls have abandoned their chores, she gets Miyako to assign them chores, namely shell-diving in see-through. It is revealed that Miyako is Haruka's older sister.

Cats and dogs are attracted to Sumi's bosatsu, the animal realm. Sumi is locked in the temple while the rest of the gang patrol the temple at night. Kazuki finds out about the situation and joins the patrol to seduce Ikkou. Inspired by Ikkou resisting awakening by Kazuki's seduction, she recites the sutra and manages to calm the dogs down.

One of Kazuki's subordinates, a vengeful ghost, creates chaos in Japan with flying zombies. The girls attempt to exorcise the zombies by themselves but the task proves too hard. They find Ikkou ballgagged, bound with bondage restraints by Jotoku for dismally failing all his subjects at school. Ikkou awakens and successfully exorcises all the spirit but faints afterwards. Kazuki's jealousy is tangible when she sees Ikkou and Chitose together.

After a fight with local gang, which uses Ikkou as hostage, Yuuko visits Ikkou in the hospital and gives him food. Ikkou faints after eating. They see a little boy refusing to do surgery because of the absence of his mother. Empathising for the little boy, Yuuko promises to make the little boy a delicious dish so that he can do surgery. They first try niku jaga, a Japanese dish made predominantly of potatoes. After many failed tries they switch to sunnyside up fried eggs. Yuuko manages to make it on her last try and the little boy approves of the end product.

Ikkou's ghost friend, Yagani, proclaims his love for Kazuki because he likes the feeling of being exorcise by her. However, Kazuki rejects his advances. She challenges Chitose at the school's annual athletics carnival for Ikkou. After a backfired sabotage attempt by Kazuki, she lock herself up in the PE equipment room with Ikkou.

Kazuki's two subordinates helps Kazuki to seduce Ikkou under different guises. When most of them are foiled by Chitose, Kazuki confronts her and questions her feelings for Ikkou.

Kazuki explains that all the times she seduced Ikkou was because of her empathy of Ikkou being sent to a temple at an early age. She over-awakens Ikkou and is consequently disappears into his soul. The awakening causes residents of Tokyo to become frenzied zombies and an unprecedented amount of spirits to appear. The gang and Jotoku exorcise the spirits and Chitose manages to stop Ikkou in his awakened state. Kazuki is released and promises to redo her training.

A baby is left abandoned at Saienji's gate. The gang plus Kazuki attempt to pacify the baby in Jotoku's absence. Kazuki uses the pretext of calming the baby to seduce Ikkou. Haruka, who has a natural talent for calming the baby, is reminded of Miyako looking after her in the past.

Chitose and Ikkou are tasked with helping the Toudou family. There, Ikkou meets Kazuki, a special monk from a rival temple to Saienji. They try to exorcise the spirits together but create embarrassing situations for themselves. Later, when Ikkou and Kazuki are alone, she tries to awaken him to "the right path".