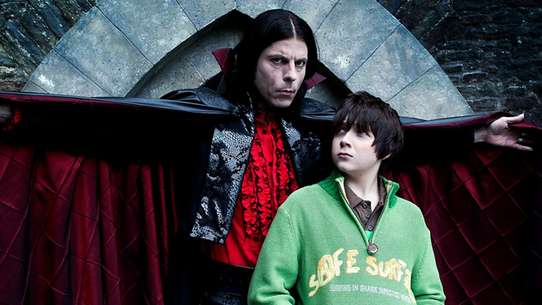 The BEST episodes of Young Dracula

Single father, Count Dracula, moves to London from Transylvania with his two kids, Vlad and Ingrid. The story revolves around Vlad wanting to fit in with his classmates in his new school rather than sucking their blood as his father wants him to. Vlad befriends another outsider named Robin who wants to become less like the popular crowd and preferably more vampiric.

The Dracula family celebrations are cut short by another unexpected arrival.

Vlad persuades Sally and George to stay a little while at Garside, as he would like to get to know them better.

Vlad and Ingrid join forces to capture the Shapeshifter, but since she can assume the physical appearance of anybody, they are initially at a loss as to know who she is. As bait for Elisabeta, they capture and torture Malik to force her to show herself; banking on the fact that even the most twisted of mothers still care about their young.

Vlad is still in denial about Bertrand's death and is lying to everyone about the mind wipe of the slayers. Ingrid's bid for a position on the Vampire High Council fails due to an outsider, and she suspects foul play.

The Count resorts to bribery when he learns Vlad is only planning a brief stopover back home during his world travels. When Vlad starts to feel ill, Renfield's search for a cure uncovers a surprising family secret.

Vlad is angry to discover the secret his father has been hiding from him for 18 years. Meanwhile Ingrid is trying to climb the ladder at the VHC by dusting her competition!

When the Count converts Garside into a vampire-themed hotel, Vlad invites his breather mother to stay without revealing his true identity.

A mysterious new visitor at Garside warns the Draculas that they are the next target of Ramanga's fearsome Shadow Warriors.

Shy, clumsy Boris faces his destiny and becomes a powerful vampire. Despite Vlad's hopes that he won't become evil, the new, stronger Boris uses the Blood Mirror to drain his father and the Count of their powers.

Bertrand is convinced the Shapeshifter is linked to Malik. In retaliation the Shapeshifter creates chaos by manipulating the Dracula clan. The peaceful coexistence is teetering on a knife edge and Vlad has never felt so alone.

Vlad's problems appear to escalate even though he's dusted Bertrand. The Slayers Guild anticipates an end to the ceasefire and plan to attack. The only way they will deviate from their plan is if Vlad sacrifices Erin who is still biting.

The Count is looking forward to a visit from his brother and his family, but is shocked to discover that Ivan the Bloodthirsty is now living blood-free and calling himself Harvey. Meanwhile, Vlad meets his weedy 15-year-old cousin Boris, who is about to undergo the "vampire transformation."

Powerful vampire Ramanga arrives, expecting the Praedictum Impaver to be opened and demanding to see the Chosen One. But Vlad has been summoned by the Blood Mirror and must face not just one but a thousand evil reflections.

Vlad's back and wants to learn more about the clan leaders so he can control them when he takes power. But Jonno and Mina Van Helsing unexpectedly turn up at the school and Vlad must test if their mind-wipes are still in place.

With Vlad about to turn 18 and become the Chosen One, Ingrid decides to make a final bid for power.

Malik finds a surprising ally in his mission to rescue his mother from the Blood Mirror.

Ingrid turns a visiting netball team into vampires and sends them out to kill Vlad, but the inexperienced girls fail miserably. While searching Erin's room, Bertrand discovers that she is not only a breather, but also a slayer.

Suffering from blood poisoning, Ingrid finds herself on the run from slayers. With his powers as the Chosen One increasing, Vlad has visions of his sister's plight and decides to help her and bring her to their new home.

It's Valentine's Day and the Count brews up a love potion, Ingrid is horrified to discover she's falling in love with a breather, while Vlad and Robin compete for the affections of the new girl at school.

Vlad's mother is back and she's pregnant. The Count decides that the new vampire baby should replace Vlad as his son and heir, but Vlad suspects that the father may actually be Magda's werewolf boyfriend, Patrick.

Vlad's 13th birthday is interrupted by a surprise visit from his grandparents. Feeling that the Count is not upholding traditional vampire values, they decide the only solution is for Vlad to gain his full vampire powers early.

Vlad invites Erin to stay at the school, unaware that she is an undercover slayer out to avenge her brother. When Bertrand arrives, Vlad must prove he is the Chosen One by opening an ancient book that will give him power over all vampires.

Chased out of Transylvania by a mob of angry peasants, the Dracula family is forced to move to England. Vlad hopes it's a chance to be a normal kid but his new neighbor, vampire obsessed Robin Branagh, is a long way from normal.

Vlad faces the first of his blood tests, an important exam that he must pass in order to gain his full vampire powers. Upset that he can't help Vlad with the test, Robin decides to try being normal and joins the school football team.

On her sixteenth birthday, Ingrid is looking forward to facing the Blood Mirror for her transformation, but has second thoughts when she finds that her reflection is even more evil than she is and wants to kill Will, her human boyfriend. Meanwhile, Mr. Van Helsing's wife forces him to destroy all his vampire fighting gear.