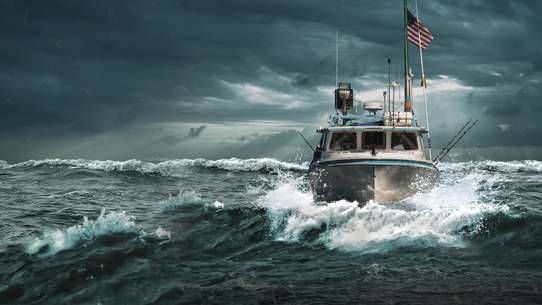 The BEST episodes of Wicked Tuna

Every episode of Wicked Tuna ever, ranked from best to worst by thousands of votes from fans of the show. The best episodes of Wicked Tuna!

Fishing is a hard life, and harder with bluefin stocks depleted. In Gloucester, Massachusetts, there's a special breed of fishermen. For generations they've used rod and reel to catch the elusive bluefin tuna. They depend on these fish for their livelihood, and the competition is brutal. Over the next 10 weeks, the most skilled fishermen will set out in the frigid waters of the North Atlantic in hopes of catching the valuable bluefin tuna. When one bluefin can bring in as much as $20,000—they'll do whatever it takes to hook up.

When inexperienced fishermen crowd the water, the fleet has to fight through additional obstacles in order to earn a paycheck

It’s opening day of the bluefin tuna season, and the first fish can bring big money. With a payday at stake, every captain is fighting to land a tuna.

Captain Tyler McLaughlin is within striking distance of becoming this year’s champion, but will a sudden setback at sea derail his chances?

As a massive storm front slams the fishing grounds, the fleet takes big risks to catch the elusive bluefin.

It’s the first day of a new bluefin season, and the Gloucester captains unexpectedly meet their matches when a fleet of outsiders comes to town.

In the second season finale, a storm brews on the horizon as the final week of the season continues. The FV-Tuna.com remains in the lead but hasn't caught a fish this week. Nearest rival Pin Wheel has two fish on deck from earlier in the week. Over on the Lisa & Jake, Paul caught three fish already and is on the way to reaching his $50,000 goal. The storm threatens the Hard Merchandise, but with one in the haul already they hook up again and fight for a second catch to end the season strong.

With only two weeks left in the season, just one fish is not enough for the Gloucester captains--and the lure of doubling their luck is tempting. FV-Tuna.com holds the lead for the fifth week in a row, followed closely by the young guns on The Pin Wheel. Paul, who recently left FV-Tuna.com to lead his own boat, is desperate for a win as a new captain--and is counting on the cash to provide for his family and young daughter.

The fleet battles extreme weather, monster bluefin and uncertain profits as the captains fight to land their last catches — and the No. 1 spot.

An intense storm slams into the shores of Massachusetts, and meteorologists are calling for winds up to 20 to 30 knots and 4- to 6-foot-high waves. Most wouldn’t dream of steaming out into conditions like these, but a few are brave enough to dare risk their lives — the fishermen of Gloucester.

Let the games begin! It's tournament time in Gloucester, and with a big cash prize up for grabs and the best boats in New England joining the fray, it's the mother of all battles to catch the biggest bluefin. Tensions come to a head as the mischievous young crew of the Pin Wheel plays a prank on the biggest hothead in the fleet, Captain Ralph of the Odysea, and get more than they bargained for.

Meet Kevin and the Christina, a boat that gets its own real life fish story when it snags an eleven-hundred-pound “monstah” right out of the gate. The story of Kevin’s catch, by far the biggest of the season, is the talk of the town and no one takes it harder than Dave on Tuna.com. Dave puts his boat on overdrive to catch up, while Marciano is forced to sit on the sidelines with a charter tour so he can pay off debts.

The weeks of fishing take their toll on the fleet. Paul, feeling frustrated after a disappointing week, takes his anger out on Rick.

With the fishing season already half over, the captains have no choice but to head straight into a wicked storm. The Gloucester boats tail behind Pin Wheel; and Tuna.com knows that without risk, there's no reward, and they head full steam ahead. Hoping that the change in the weather will lead to a change in luck  and bigger fish  the captains get serious with the stakes this high and money to be made.

Capt. Dave Carraro commands the top-earning boat on the leader board, but nothing will stop the rest of the captains from pushing against all odds to take down the king.

Captain Dave Marciano is desperately trying to maintain his precarious lead, but several run-ins with sharks and a fleet of fierce competitors are shaking things up.

On Kelly Ann, the future of Captain Paul Hebert's tuna season hangs in the balance, and on Pin Wheel, Captain Tyler McLaughlin's aggressive behavior may cost him his one remaining mate.

With winter approaching and the yearly quota almost filled, the fishermen push their limits to catch the final fish of the season. The clock is ticking, and the fishing is fast and furious. It seems everyone's hooking up but the king of the fleet, Dave, captain of the Tuna.com. But with the final hours of the season running out, Dave stumbles onto what may be the biggest, baddest fish of the year if he can land it.

Pinwheel and Dot Com battle for the top prize but dark horse Hot Tuna upsets their equilibrium and turns this competition into a three-way contest.

Captain Dave Marciano defies the fleet by fishing in a secret location on his own, alienating him from the others but helping his boat stay on top.

Valley of the Wolves