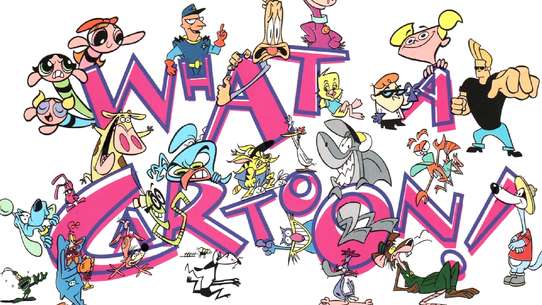 The BEST episodes of What a Cartoon

What a Cartoon! is an American animation showcase project created by Fred Seibert for Hanna-Barbera Cartoons to be run on Cartoon Network. The project consisted of 82 short cartoons, intended to return creative power to animators and artists, by recreating the atmospheres that spawned the great cartoon characters of the mid-20th century. Each of 71 short cartoons mirrored the structure of a theatrical cartoon, with each film being based on an original storyboard drawn and written by its artist or creator.

Pizza Boy must deliver a pizza to Antarctica safe and sound under five minutes, or else he will receive no tip.

The Flintstones' pet, Dino, tries to keep the house cat outside for the night.

#3 - Sledgehammer O'Possum: Out and About

Dogg is eating lunch in the countryside and get tormented by Sledgehammer O'Possum.

The Devil (later known as The Red Guy) kidnaps Chicken, who must be saved from damnation of smoking by Super Cow, who is his sister, Cow. This episode has been nominated for an Emmy. Pilot to Cow & Chicken.

Dee Dee and Dexter battle turning each other into animals, using Dexter's latest invention. Note 1: First short to become a series after being deemed most popular through a vote held in 1995. Note 2: First pilot to Dexter's Laboratory.

The mounted police of the Yukon has its uniforms stolen by a grizzly bear planning revenge on them when they skinned his animal friends. Yoink and Sergeant Thumbsworth Tharplung is sent to retrieve them.

A man named Reilly gets a cat named Flinch in order to impress a female cat lover named Sofie and threatens the cat that if there is a scratch on anything while he's away, he will send him to the violin factory. It won't be easy when Sophie leaves Flinch a feline playmate named Fix that ends up wrecking everything.

The Powerpuff Girls are judges in Townsville's yearly jam contest. Fuzzy Lumpkins is upset when his meat jam doesn't win and is looking for revenge.

A Wild West outlaw needs to finish the fourth grade, and deal with his obnoxious class rival, little Timmy.

#10 - Mina and the Count: Interlude with a Vampire

The Count (presumably Count Dracula) is forced to play with a 7-year-old girl in her room, after a mix-up in the schedule with his victims.

Johnny is a peaceful and forgiving worm until a human steps on him repeatedly. As a result, the worm becomes paranoid and angered at the human race, seeking revenge. Note: Style reminiscent of John Kricfalusi's The Ren & Stimpy Show; he is listed with a "Special Thanks" credit.

Steve, a homeless dog, is adopted by dimwit Larry (the only man to understand dog) and lives disaster after disaster when Larry takes him shopping. Note: Episode's style developed into MacFarlane's Family Guy.

A first-time cook is preparing a dinner for his date. Trouble arises when the wind flips the pages from his cookbook.

Yuckie Duck is a paramedic and he has to perform life-saving feats such as pulling a tack out of a lion's posterior.

#16 - Courage the Cowardly Dog: The Chicken from Outer Space

A fearful dog tries to stop an alien chicken's plans to invade Earth while in his owners' farm. Produced by Stretch Films in New York City and distributed by Hanna-Barbera. The short was developed into the final series spun-off from What a Cartoon!, Courage the Cowardly Dog, in 1999.

Shake the dog is invaded by Flick the flea. They are both accomplished musicians and find themselves in the competition of a lifetime as each one tries to outdo the other.

Big Bad Wolf wants to catch the three little pigs again. He decides the only way he can do it is to build a robot wolf to take his place.

Based on the classic cartoon characters by Tex Avery, a bird crashes a light bulb so it doesn't disturb his sleep and sits in the empty socket. George and Junior, the building's janitors/engineers, are sent to fix it.

Johnny Bravo tries to score with a zookeeper girl by capturing a runaway gorilla. Note: First pilot to Johnny Bravo.

Yuckie Duck works as a cook and waiter in a dirty restaurant, and delivers unappealing orders to the demanding customers.

Melvin is an alienated loser until he meets Malcom, a trumpeter cockroach who has a huge talent. Note: The creator Bakshi disowned both shorts upon release.

Bloo and his dog friends sneak out of their owner's houses at midnight to set on a pirate adventure in the city.

Crawdad Eustace is fed-up with being treated as food and goes with possum pal Mordechai on a cross-country trip to New Orleans.

Gramps tells his grandchildren about his battle against invading aliens.