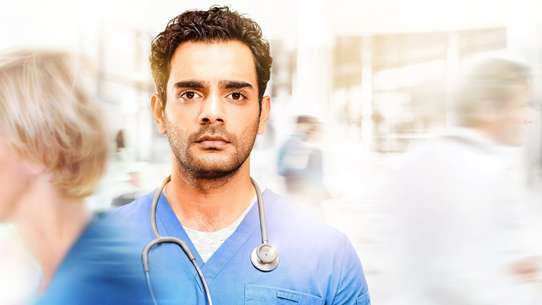 The BEST episodes of Transplant

Every episode of Transplant ever, ranked from best to worst by thousands of votes from fans of the show. The best episodes of Transplant!

When Dr. Bashir “Bash” Hamed, a charismatic Syrian doctor with battle-tested skills in emergency medicine, flees his war-torn homeland, he and his younger sister Amira become refugees struggling to forge a new life in Canada. But if Bash ever wants to be a doctor again, he must redo his medical training from the ground up and obtaining a coveted residency position is nearly impossible. But when a horrific truck crash nearly kills a senior doctor right in front of him, Bash saves the doctor's life and earns a residency in the biggest Emergency Department of the best hospital in Toronto.

Bash and Mags race to save a woman with mysterious symptoms who was nearly killed by their team's medical error. Theo tries to help a gravely ill teen and his family deal with the possibility that medical hope has run out.

When a young mother addicted to opioids nearly dies, Bash must figure out whether she's using again, or if something else is causing her deadly symptoms. Mags tries to help a patient who isn't healing properly. June is blindsided by her father.

When an explosion takes place near the hospital, Bash runs toward the danger. When a schoolgirl is brought into the hospital in cardiac arrest, Theo does everything he can to save her.

Bash provides medical care to a friend who is reluctant about treatment. Mags has her hands full with a young woman who seems to be withholding information. Dr. Bishop offers Mags an incredible opportunity.

Bash finds himself connecting with an unlikely patient. Mags strives to find balance in her life. Theo has a difficult discussion with his wife. June attempts to connect with a closed-off teenage patient.

When Dr. Bashir 'Bash' Hamed finds himself at the site of a tragic accident, his medical training takes over as he works to save the wounded. At York Memorial Hospital, the staff, including Dr. Magalie 'Mags' Leblanc, Dr. Theo Hunter, and Dr. June Curtis, treat patients from the accident while concerns arise about their Chief of Emergency Medicine, Dr. Jed Bishop.

The emergency department hosts a family reunion after a woman and her grandmother are admitted together. With Bash’s future on the line, he and Dr. Bishop try to save each other. Mags makes a big decision about her career. June makes an unexpected commitment. Theo throws himself into a new opportunity.

Dr. Bishop puts extra pressure on Bash, while Theo feels powerless when something happens to one of his daughters back home. A patient puts Mags' moral convictions to the test, June tries to improve her social skills.

Bash and Amira settle into a new environment. While at the hospital, Bash helps a worried couple expecting their first child. Dr. Bishop puts Mags to the test by personally evaluating her performance in the emergency department.

When Bash and Mags work together to treat a patient with a tricky diagnosis, Mags realizes that Bash's experience as a doctor in Syria has led to an instinct-based approach. Head nurse Claire Malone is concerned that Dr. Bishop is already working following his accident. June struggles to put her foot down with Dr. Singh concerning the needs of a patient. Theo works to build a connection with Bash.

As Bash's future at the hospital hangs in the balance, he diagnoses a young patient with a rare disease that could have been prevented. Mags is faced with case she cannot solve, as June tries to keep her personal life private. Theo drives through the night to spend a day with his family in Sudbury, Ontario.

Bash helps his undocumented friend Khaled apply for asylum. At the hospital, he treats a couple from India reconciling with their desire to return home. Theo and his charismatic medical student Jake treat a teenage boy with an eating disorder. Mags gets an unexpected career opportunity but faces self-doubt after her recent setbacks. Dr. Bishop and Claire adjust to new hurdles in their relationship.

A bus full of kids crashes and sends the team racing. Bash’s life is upended when he is reunited with a woman from his past. With Dr. Bishop still unconscious after his stroke, Mags struggles to find support in her mentor’s absence. Theo faces repercussions from his family after taking a full-time job away from home, and June has an important career decision to make.

Bash does his best to celebrate Eid with his sister, but she wishes they could continue the traditions they had back home. Theo treats a teenage patient who wants to avoid telling his parents why he's in the hospital.

An incident at work causes Bash to second-guess himself. Mags is inspired by a firefighter devoted to her work, even if it means risking her life on a daily basis. June must learn to work with others.

Bash must deal with an unexpected turn of events. Theo gets a surprise visitor at home and faces a closed-minded patient at work. Bash and Mags team up to help a patient from overseas, but face a language barrier.

Bash’s reunion with Rania ignites difficult memories, and his patient experiences an apparent miracle. Mags’s go-the-extra-mile approach gets unwanted attention from her new boss Novak. June vies for Chief Surgical Resident. Grappling with distance from his own daughters, Theo helps a teenager make life or death decisions for her injured younger sister. Claire studies to become a nurse practitioner.

Bash’s career is threatened, leaving him with a major decision to make. When a toxic father needs a liver transplant, Bash deals with the man’s estranged son. While treating a woman having strange reactions to a spider bite, Mags employs a strategy to work alongside Novak. Theo helps a young lupus patient make her dreams come true, and takes steps to rebuild his life. June discovers her father’s secret. Dr. Bishop and Claire begin a new chapter.

A city-wide blackout sends the hospital into total darkness. Bash treats a rock climber who fell from a cliff. Dr. Bishop and Bash make a major career decision, putting their futures on the line together. June is finally forced to face her father. Theo goes above and beyond to treat a deaf child while letting frustration get the best of his spiraling personal life. Claire struggles to find footing in her new role as a nurse practitioner, and Mags pays a visit to a former mentor.

Rania and Bash reach a crossroads. Dr. Bishop contends with career limitations. Mags is shaken by a violent encounter. The team treats a family separated by a brutal boating accident. Theo struggles to reach a boy with Sensory Processing Disorder.

Mags is surprised when a patient triggers her. Bash treats a woman suffering from Locked-in Syndrome, and the husband whose life revolves around caring for her. Bash takes Amira out of town for a joyful dance recital, where a familiar face surprises them. Dr. Bishop’s ambitions for the department lead to consequential staffing changes. June and Dr. Singh’s differences get in the way of their work. Theo treats a teen with a rare presentation of ADHD and gets a visit from his father.

Bash turns to his therapist to make sense of some haunting memories. A figure skating duo face a painful reality after an accident on the ice. Mags struggles under Novak’s harsh treatment. Dr. Bishop’s future is threatened by scrutiny over past actions. Meanwhile, June discovers the challenges that come with ambition, and Theo’s marriage faces a crisis.

When treating a young woman with a rapidly progressing health crisis, and an overbearing doctor/father, Bash and Mags have a difference in opinion. Dr. Bishop confides in Bash about a professional dilemma. Theo over-invests in the rocky relationship between his new-parent patients. June puts herself on the line for a sick woman following a gastric bypass, against the advice of a powerful surgeon. Mags makes a big career decision.

Fighting to save a baby with a heart defect, Mags is flooded by memories of her own health struggles as a child. With his performance still being closely scrutinized, Bash remotely treats a cluster of patients with an undiagnosed illness in Aleppo, while also caring for the victims of a Toronto apartment fire. Dr. Bishop asks Claire for a life-altering favour. Theo’s unpredictable decisions start piling up, and June’s professional and personal lives collide.

Bash’s past weighs heavily on him as he fights for an emancipated teenager with a failing kidney. Mags treats a baby with a complicated heart condition. Theo is thrown by an asthma patient’s brazen mother. After a patient makes waves, Dr. Bishop advises Bash to play it safe, while championing a new initiative in the York Memorial emergency department. June backs Dr. Bishop’s proposal for a Trauma OR, sets boundaries with her brother and tries to get a surgical patient to his wedding.