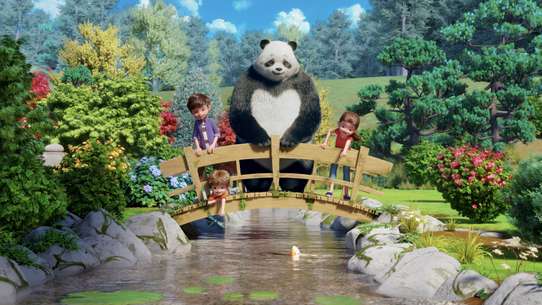 The BEST episodes of Stillwater

Every episode of Stillwater ever, ranked from best to worst by thousands of votes from fans of the show. The best episodes of Stillwater!

Siblings Karl, Addy and Michael have a very special next-door neighbor: a wise panda named Stillwater. His friendship and stories give them new perspectives on the world, themselves, and each other.

Addy looks forward to a peaceful painting session with Stillwater.

When Michael and Addy build a go-kart, Karl feels left out.

While helping Stillwater make treats for the Winter Solstice Festival, the kids learn he plans to share some with a neighbor of whom they’re wary.

Karl is unwilling to give up his favorite shirt, even though he’s outgrown it.

Things don’t go as planned when the kids try to watch a lunar eclipse.

Michael sees that Addy looks sad and wants to cheer her up.

Karl and Koo think of ways to make their playdate last forever.

Stillwater shows the kids his worm farm and other things he does to live green, which inspires them to come up with more ways to help the Earth.

Stillwater is anxious about everything he has to do before his trip.

Addy feels betrayed when her best friend spends time with someone else.

Karl is upset that MuMu, his favorite stuffed toy, is “broken.”

Karl copes with the loss of his favorite climbing tree.

Addy’s time with her classmates gets disrupted by Karl’s antics.

Michael feels abandoned on Halloween when Addy gets invited to a friend’s party, and Karl decides to stay in because he’s afraid of ghosts.

Michael is upset when Karl trades a rare game card.

Karl is afraid to visit a barber for the first time.

Michael is hired to pet-sit a neighbor’s dog for the weekend.

Addy is disappointed about not getting a lead role in the school play.

The kids try to protect their sandcastle from being washed away.