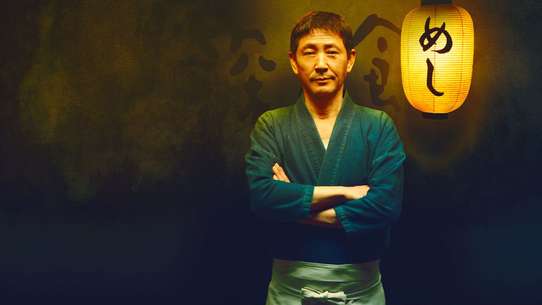 In a back alley of a busy district sits a small eatery called Meshiya, referred to by its patrons as the Midnight Diner. The little joint, which the Master runs by himself, is open only from midnight to 7:00 AM. The menu consists only of a pork miso soup set, beer, saké and shochu, but the Master’s policy is to make whatever his customers request. Tonight, like every other night, a menagerie of customers flock to the Midnight Diner, where the bonds among the Master, his food and the patrons set the stage for humorous and sometimes wistful episodes of human drama that feed both the belly and the soul.

The shared love of fried rice omelets forms an intercultural bridge between a young Japanese physicist and a Korean girl.

As December comes to a close and the regulars gather at the diner, the Master takes a look back at his memories of the year.

A breaded ham cutlet brings back an elderly lawyer's memories of playing the board game Othello with his long-lost younger brother.

In her mid-30s, Chizuru worries her modeling career is ending. An encounter with a high-powered fan gives her a chance to evaluate her priorities.

Two aspiring voice actresses stop by for lucky bowls of kitsune udon, but six months later, only one of them seems to have had any luck.

It's never too late for a fresh start. One year ends and another begins as familiar faces gather to celebrate New Year’s Eve at the Midnight Diner.

A pachinko parlor employee and the middle school classmate he idolized seem to reconnect over curry ramen, but appearances can be deceiving.

An office worker who loves pork steaks knits sweaters for the men she adores, but her affections -- and handiwork -- are not always appreciated.

A specially prepared bowl of tanmen noodles leads a radio announcer to discover a secret about a beloved television show from his youth.

Writer Yada and hostess Hikaru bond over their love of horoscopes and chicken cheese cutlet. Secretly, Yada tries to use the horoscopes to woo her.

A diner regular reunites with an old classmate who, despite a good upbringing, now works a menial job to support her troublesome nephew.

The Ueharas run a barbershop together. They seem happy, but when his wife goes on a trip, a beautiful kimono instructor catches Mr. Uehara's eye.

Game designer Akai grew up in an orphanage. He finds solace in a chicken rice dish that also holds the key to reconnecting with his birth mother.

A dish of sauteed Chinese yam rekindles the connection between a young wife and her former lover, with whom she shares a hidden professional past.

A lonely little boy with only a gambler to take care of him hopes to make a connection with a bar girl over a mutual appreciation for egg tofu.

Businessman Kotani is jubilant at his high school baseball team's success. His joy stirs up memories of his former best friend, the coach of the team.

A Mr. Lee shows up nightly, ordering rolled omelets every time. He turns out to be a film director fleeing from his own set and his father's legacy.

A childish fight over a fish-sausage corn dog leads to a schism between an Asakusa comedian and his now-famous former assistant.

Upon finishing the last of his late mother's pickled plums, a man suddenly wonders what will become of his erotica after he passes away.