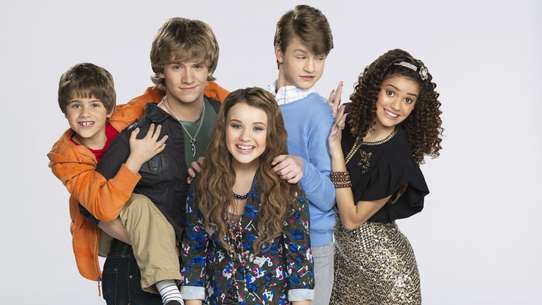 The BEST episodes of Life with Boys

15-year-old Tess Foster navigates her way through the turmoil of teen life while living at home with her single, overprotective dad and three brothers. Although Tess admires the four important men in her life, they do have four totally different perspectives. Despite the shortcomings of being the only girl in a male household, the boys can sometimes offer solid advice. Whether it's building up the courage to talk to a boy, dealing with an obnoxious one, or coping with the repercussions of being the only girl on the boys' wrestling team.

#1 - Young and Stupid With Boys

#5 - Climbing The Walls With Boys

Jack decides to set up a private bathroom for Tess but would have to take a second job in order to pay for it.

Tess feel guilty about a lie. The boys and their dog are all mad at Jack because he can't remember the parental passcode for the TV.

#8 - Partners In Rhyme With Boys

Tess and her brothers find their Christmas plans wrecked when Jack announces that he wants them all to surprise Grandma for Christmas.

After Tess is alone on Valentines Day, she and Allie come up with the idea of "Girl-entines day".

#13 - In the Principal's Office with Boys

Tess and Allie discover what true friendship is really about.

Tess reluctantly agrees to join the mathletes at school.

Tess invites her grandmother to stay with them to try to improve the boy's manners.

Allie, Jack and the boys search for a tape to help calm Tess down during exam week.

Tess is set to wrestle against last year's champion. Gabe borrows Jack's glasses to look cool at a party.

Tess is blown away to find out that Allie is going out with Bobby Parelli. When Tess tries to show Bobby all the differences between him and Allie, she gets an unexpected result.

Tess Foster wants to join the school wrestling team, against her wishes of her father, the gym teacher.

#22 - When Something Better Comes Along with Boys

Allie is angered that Tess spends so much time with Bobby.

Jack's heart is heavy when he sees how quickly his children are growing up. This makes it more difficult for Tess, who is trying not to make her 15th birthday feel like a child's birthday.

When Tess and Allie are invited to a prestigious party, Tess convinces the host to also invite her brother Sam.

When Kaylee says that girls on the wrestling team aren't attractive to boys, Tess decides to prove her wrong,