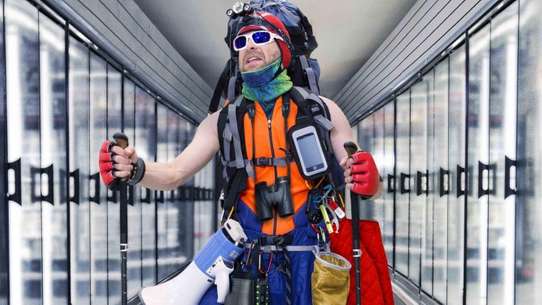 Actor and comedian Jon Glaser sets out to make a docu-series about his greatest passion: gear. Ironically, it's this very obsession that continually threatens to derail the show, sending each episode spiraling off on deeply personal tangents.

Jon pitches the network on a big skydiving season finale. Scared to death of actually jumping out of a plane, he tries trapeze school, indoor skydiving and VR jumps. Will he build up the courage to make the real jump from 13,000 feet?

In the season finale, Jon sets sail on his most adventurous journey yet, seeking answers to the age-old question - why gear?

Jon's wife Leslie confronts him about his gear hoarding, which inspires him to create a brand new activity: gearing! As Jon spirals further into gear addiction, his loved ones stage an intervention. But will they be too late?

Jon's vasectomy isn't going to stop him from shooting a super cool episode about basketball. But when his prolonged recovery starts crossing lines, he risks a mutiny among his cast and crew, including his trusted 'Spurt.

Jon and his real family hit the road for a snowboarding vacation and all the cool gear that comes with it. But things quickly turn ominous when Jon realizes his son may be the Anti-Gear!

Jon rekindles a long-held passion for photography. But when seemingly innocent professional portraits awaken him to a personal proclivity, he becomes exposed to a whole new world and finds his true calling.

Man's best friend deserves the best gear. But when Jon's gear show is interrupted by a dog owner who doesn't clean up his pup's poop, Jon plans to exact his revenge.

When the network tells Jon it wants his 'Spurt to be the new host of the show, Jon comes up with a devious plan to oust him. Jon then visits a barbershop, tattoo parlor, and CrossFit gym to prove that he's just as macho as his old sidekick.

With his real family away, Jon decides to film in his real home and kick back in the "chill zone" with his bros. But when they all bail, Jon is left scrambling to salvage his weekend. Will gear save Jon from two days of loneliness?

Jon gears up for his son's first football game with a kick-ass tailgate. But when the mysterious art of magic gets in the way, Jon must confront a deep secret from his past.

Golf turns philosophical when a ghost from gear past forces Jon to make a difficult choice; a choice that could threaten to put a permanent wedge between Jon, his trusted 'Spurt, and the network.

Jon Glaser gears up for his first surfing lesson, but when it turns into a wipeout, he ditches his surfboard for a metal detector and gets more than he bargained for.

Jon takes one small step for gear and one giant leap for gear-kind as he prepares for space; MMA's Renzo Gracie and boxing's James Thornwell guest star.

Jon takes on cycling for the next episode of his gear show, but gets sidetracked when his e-sidekick, Gear-i, writes an epic script about a post-apocalyptic bike messenger.

Jon Glaser sets out to make a TV show about his greatest passion: gear. Along with his designated gear expert, Steve Cirbus, Jon goes on a couples camping trip, but when things get weird between the couples, it threatens to derail the show.

Former high school baseballer Jon Glaser gives back by coaching a Little League team. But a cryptic voice takes him on a dark journey into his past. Robert Kelly guest stars.

Jon Glaser loves hockey. But the fact that he never learned to skate until he was an adult sends him on a collision course of emotions involving his mommy and his son. Former NHL great Ron Duguay guest stars.