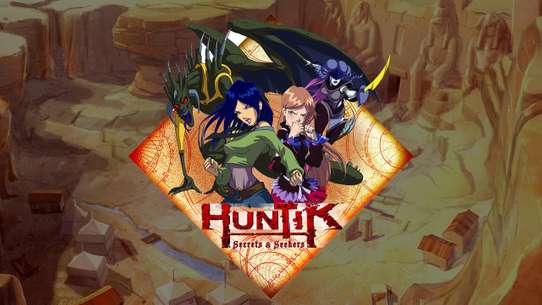 Lok's father has been missing for years, and the only thing Lok has to remember him is an ancient jar. When that jar is accidentally broken, Lok discovers a journal and an amulet that discuss the mysterious Titans. Now Lok is teaming up with Sophie Casterwall, Dante Vale, and Zhalia Moon is find and bond with the Titans before The Professor, DeFoe, Grier, and the evil organization use them to take over the world. A new life as a member of the Huntik organization has only just begun.

The Huntik Team joins Montahue and Tersley for a mission to recover the Casterwill Titan Phoenix. But powers and Titans can not be used because of the Lodestone, and the Blood Spirals have a headstart. Lok destroys the Lodestone and Dante plans to ambush the Spirals before they realise magic can be used again.

#2 - The Tower Of Nostradamus

A new organisation team led by the charismatic Wilder takes over the Tower of Nostradamus. Dante, Lok and the team manage to stop them with some help from Nostradamus' predictions. On the way a message from Lok's father and clues from the Ancient Seer point the way to Avalon and the Magic Willblade.

Venice, Italy: Den joins the Huntik Team to replace Zhalia but he is not ready to be a hero. Meanwhile, his brother Harrison is training to be a Blood Spiral and is getting strong. Den runs away from the foundation and is attacked by the Blood Spirals, the Huntik Team saves him. While Zhalia protects Harrison and proves herself to the Spirals.

Lok and the Huntik team are on the trail of Avalon. Sophie is drawn to a crystal cave where she must prove herself to the Casterwill Elder Nimowey. Sophie learns she is a direct decendant of Lord Casterwill and bonds with the titan she thought was lost empowering her and turning her into Poer Bonded Sabriel. Nimowey promises to help her find Avalon and the Willblade.

After Sophie's Revelations in the Crystal Caves the team search for Avalon and the fabled Willblade. Lady Casterwill tells them how her family allied themselves with the Titans when they first arrived on Earth.

Prague, The Czeq republic: The Huntk teams faces off against Lucas Casterwill, Sophie's brother. They come to an understanding and help find the missing Amulet of void.Zahlia's plan lets them trick the organisation into revealing it's location in Klause's library. Lucas explains the history of the betrayer who tried to summon the Nullifiers in the past.

The Huntik Team goes to the Organization's base and looks for information about Eathon Lambert, then they go to Perù and look for the waterfall told by the Professor where Eathon Lambert disappeared. They are attacked by some evil seekers who want to restore the Organization, but at the end they find a secret way on the back of the waterfall. Here they find an old Casterwill manufact, something like a portal on the Titan's world. They understand that Eathon has gone to the titans world and Sophie uses her Casterwill powers together with a titan of Zhalia and Eathon's holotome and so the hologram of the Lambert seeker appears and talks to his son. He went to the world of Titans to prevent the consequences of a threaten for the whole world: the Bloody Spiral. Eathon orders his son to help the Casterwill family to fight against the Spiral and gives him a clue: he has to interpret the Nostradamus prophecies!

The Huntik Team try to prevent Rassimov from breaking the ancient seal of Lord Casterwill and activating the Spiral Mark. They must defeat Rassimov and his Titans and get Sophie to the center of the Mark where her Casterwill Legacy will prevent the use of the Mark.

Lok and Sophie are called before the Casterwill Elders, but Sophie can not convince them to fight the Blood Spiral. Her brother Lucas sends her to prove her worthiness to lead the Casterwill by finding the Legendary Titan of Bravery, Mythras. As Sophie overcomes the challenges a Spiral Army marches closer.

New York City, USA: Casterwill Elder Focauld is under attack by Kiel's deadly Blood Spirals. Dante and the Huntik Team are sent to the cloisters to rescue him. In the heat of battle Sophie is forced to prove herself to the surling Focauld, saving everyone. However, Focauld is too stubborn to welcome Sophie into the Casterwill Family secrets.

Sophie faces her fears again to challenge Shauna and Wind to a desdly battle in the volcano. Lok, Dante, Cherit and Den fight with all they have but it looks like they are in trouble. Finally, Sophie leaps into the lava. She rises from the ashes having bonded with the Legendary Titan of Rebirth, Phoenix.

Den befriends a native American seeker and is given a new Titan, Kaiyo The Tracker. Wilder makes his return and captures the Huntik team as they explore the Vault of Cortez. Things look grim but Dante saves everyone by bonding with the Legendary Titan of Dimensions, Umbra The Shadow Jaguar.

The Huntik Team are given a mission to capture Rassimov, the leader of the Blood Spirals. Meanwhile Harrison has completed his training with an ailing Tantris who has passed on his strongest Titans and he joins Rassimov on a secret mission to an organisation stronghold.

County Kerry, Ireland: After Lok is woken by a dream about his Father The Huntik Team remenisce on their recent failure while enjoying the comforts of Lok's family home.They soon find themselves with a mission to uncover the Treasure of the Floating Ruins of Tyr Na Nog

#15 - An Ally from the Organisation

The Huntik Team seek aid from Grier an old ally of Dante's who, though he is a member of the Organisation shares a mutual respect. He is the ruler of an Organisation stronghold Island where seekers use their powers openly. They ask for his aid in recovering the Professors secret dossier on Rassimov from the castle.

Lok leads The Huntik Team in a mission to Rumania to capture the wild Titan Antideluvean. However, Harrison has already bonded to the Titan and is waiting for them. Lok fails to invoke Pendragon to save them but luckily Dante returns from his secret training in time, defeating Tantris with a new power, Copykind.

Following Lok's father's clues the Huntik Team investigates the legend of the Pied Piper, looking for the Casterwill Family Titan, Umbra. Lok and Googenheim defeat a monstrous swarm of Gremlow Titans and Sopie uncovers the Pied Pipe itself. Meanwhile, Dante uncovers another secret under the Sea of Cortez.

The meeting of the Casterwill Elders is disrupted when Kiel and his Spiral Army attack. The Huntik Team fights alongside the Casterwills, and Sophie faces Kiel. Bonding with power bonded Sorcerell Sophie barley wins, leaving Lok to save her from a rampaging Ifrit King. After the battle, Soohie wins leadership of the Casterwills.

Rotterdam, The Nethrlands: Zahlia returns to her old orphanage to find the Blood Spirals there reqruiting orphans. She meets 2 orphan brothers, Harrison who chooses to join the Blood Spirals and Den who turns to Zahlia for help. The Huntik team comes to the rescue and they end up with a new Huntik Foundation seeker, Den.

Vienna Austria:Zalia leads the team into Klause's library to find the Amulet of Void. Both the Organisation and the Foundation are ambushed by a devastating new enemy, The Blood Spirals lead by their old foe Razimoff. Dante manages to save himself by bonding with powerbonded Caliban but the Spirals are too strong, Void ends up in their hands.

Paris France: When the RIng of Arc vanishes Lok, Dante, Sophie and Zahlia head into the catacombs to find it. However the ring is actually the legendary titan of fate, Arc. She traps each seeker inside a dream world they must escape. The Huntik team maages to defeat Arc but Dante's dream leaves him worried about the future.

South America, Jungle: Dante, Lok, Den, and Sophie meet with the Huntik Council. The Casterwill liaison Teien ask them to find and activate the Blue Star to signify the meeting of Casterwill Elders. Lok activates the signal as Dante and Sophie hold off Kiel, but Kiel reveals he was the one who destroyed her home when she was young.

Aegean Sea, Medusa's Island: On the trail of the Titan Medusa the Huntik team meets the explosive Spiral hunter Kiel. Zahlia's plan to ambush Kiel fails and it is nearly a disaster but Lok solves the puzzle and recovers the Amulet. Sad, Zahlia leasves Dante and the others to do what she does best, infiltrate the Spirals.

Harrison and Den fight but Zahlia breaks cover to save them both from a cave in. The Casterwills and the Huntik Team clash with the Blood Spiral as Lok and Sophie fight The Betrayer. Zahlia is hurt trying to save them from The Betrayer's Titan, Demigorgan, but she's rescued by Den and Harrison together.

The longest night of the year begins at sundown and the Huntik Team races against time to find the Spiral Mark. Eathon appears to Lok and tells him how to find the last Quatraine. As Rassimov invokes Void to activate the Mark, Zahlia alerts Dante who brings the whole Team with Umbra's power.