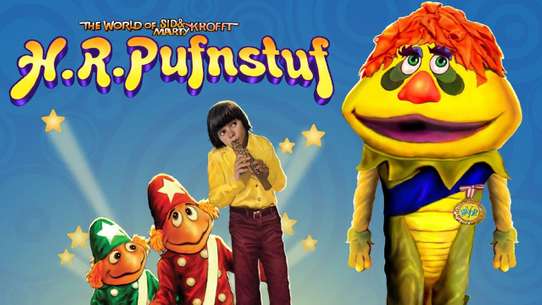 The BEST episodes of H.R. Pufnstuf

H.R. Pufnstuf is the first children's fantasy show from puppeteer brothers, Sid and Marty Krofft. H.R. Pufnstuf tells the story of a boy named Jimmy who finds himself stranded on Living Island with his magic gold flute Freddy. Here, Jimmy and Freddy are taken in by a talking dragon named H.R. Pufnstuf, who is the mayor of Living Island.

Pufnstuf and Jimmy visit Ludicrous Lion to find a way off the island. Ludicrous suggests a supersonic pogo stick. But, they don't have enough buttons to pay for it. To raise buttons(buttons are legal tender on Living Island), the gang puts on a talent show. Witchiepoo and her two sidekicks pretend to be an act called ""The Three Oranges""

Pufnstuf buys a map that gives clues where to find the 3 pieces of a key to the Magic Golden Escape Door. Witchiepoo see them on her viewer and plants fake direction signs that lead them to her dungeon door trapping Pufnstuf in the dungeon. Jimmy uses a sound effect machine to help save Pufnstuf.

Its Jimmy's birthday and Pufnstuf throw's him a party. The witch and her two henchmen arrive disguised as the music group The Three Lemons and blow laughing gas making everyone laugh themselves uncurious then the witch takes Freddy back to the castle. Orson accidentally gases himself and falls face first into a plate of candy making him look like he has Spotidious. The gang use this ploy to gain entrance to the castle and rescue Freddy.

#4 - Horse with the Golden Throat

An attempt to use a time machine to escape from the island goes awry.

Freddy gets turned into a mushroom.

Witchiepoo uses a giant cake in an effort to catch Jimmy.

#8 - The Almost Election of Witchiepoo

Ludicrous Lion has a kite-flying contest for whoever on Living Island can fly a kite the highest. The grand prize:100 gold buttons (which is the Living Island currency). Jimmy and Freddy want to enter the contest, giving Pufnstuf the idea to build a great big box kite for Jimmy and Freddy to fly home in. Dr. Blinkey helps build the kite by using a special glue of his that sticks things together instantly (even Cling and Clang). Witchiepoo sees this happening and she disguises herself as a Campfire Granny giving away free samples of candy that contains knockout drops. Fortunately Freddy and Cling weren't able to eat any and they escaped the witch, but after she left, the kite was destroyed. Freddy and Cling wake up everyone and they start to rebuild the kite. Later Jimmy and Freddy are on their way home via the box kite, unfortunately, Witchiepoo, Orson, and Seymour fly by on the vroom-broom, destorying the kite again. Jimmy and Freddy make back down safe, but the West Wind blows grusom

Jimmy and his magic flute Freddy are lured to Living Island by Witchiepoo's boat. Suddenly, the skies grow dark, and with a wave of Witchiepoo's wand....the boat...attacks. Jimmy fights for his life clutching his magical friend Freddy. Jimmy and Freddy, wash up on shore and are saved by H.R. Pufnstuf and Cling and Clang on the Rescue Racer. H.R. Pufnstuf, the Mayor of living island, helps Jimmy find the Magic Path off the island...but the witch foils the plan.

Freddy the flute gives himself up to Witchiepoo, in order to save Jimmy from harm. Pufnstuf and Jimmy build a bird on wheels, much like a ""Trojan Horse"" to get into Witchiepoo's castle and save Freddy.

Jimmy tries to steal Witchiepoo's boat. Whitchiepoo turns him into a mechanical boy, programmed to steal Freddy for her. Pufnstuf brings Jimmy to the Clock People to erase the time spell. While at the Clock People, Whitchiepoo steals Freddy from Dr Blinky's house. Jimmy makes the house sneeze and Freddy is flown safely into his arms...as Whitchiepoo loses her clothes.

Pufnstuf's movie star sister arrives to make a movie. This gives Puf the idea of keeping the witch busy by making her a stand in so Jimmy and Freddy can sneak into the castle and escape on the witches vroom broom. The witch figures out what's going on and races back to the castle. Having trouble figuring out how to work the vroom broom Jimmy is delaied long enough for the witch to find him and stop his escape on the broom.

Dr. Blinky plots to use a love potion on mean old Witchiepoo.

A movie is being made on Living Island, and Witchiepoo wants a movie of her own.

While running from the witch, Jimmy trips and falls getting knocked out. When he comes too he can't remember anything not even his own name. The rest of this story is a series of flash back as first Pufnstuf and the good guys try to jog his memories. When Jimmy wanders off and meets up with the evil trees, they bring him to Witchiepoo who then gives it a shot. Jimmy finally remembers when pieces of the castle ceiling hit him on the head