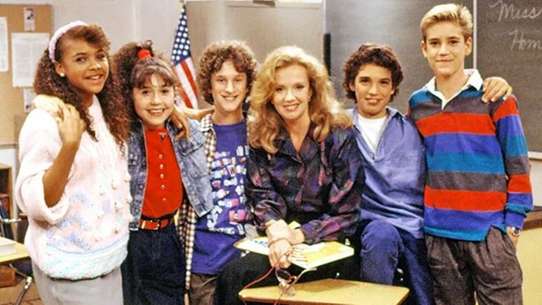 Miss Carrie Bliss, a recently widowed middle school teacher at a school in Indianapolis, must balance her personal and professional lives as she helps her students tackle life lessons.

The kids have to dissect frogs for a biology class. Nicki is not only squeamish about the dissection process, she doesn't like the idea of all the innocent frogs being killed just for a class activity. She tries to get everyone to support her campaign to free the frogs, but nobody is interested, though Zack and the other kids say they'll lie for her and cover for her if she wants to skip class. She goes to Miss Bliss and Miss Bliss tries to talk the biology teacher into allowing Nicki to abstain from the dissection process, but he refuses. Seeing no other way out, Nicki frees all the frogs. Meanwhile, Miss Bliss received a letter from an exclusive private school. Mr. Belding assumes they are trying to lure Miss Bliss away with a new job, so he starts being extra nice to her and also giving her all sorts of visual aids and extras (a globe, and encyclopedia set, a VCR & TV, etc.). When Nicki is brought to him to receive her punishment for letting the frogs go free, Mr. Belding sees

Zack's father promises him a ski trip if he can get a B on his history midterm. He's studying, but he knows he won't be able to do it so he comes up with a plan to release Screech's pet rats in the school so that the school will have to close for a few days. The test will be postponed and he will have more time to study.

Everyone in the class contributed $2.00 each to invest in the stock market as part of a class project with Miss Bliss, buying stock on the internet. Zack is interested in the concept of earning a lot of money with little work involved. He learns just enough that he convinces everyone else to change from investing in an airline to investing in potatoes. This plan backfires because they bought on margin. At first they make a lot of money (about $6,000), but then they lose a lot of money (over $1,000) which means Miss Bliss will have to pay it back, since it's her account. She was just about to buy a new car, but now she won't be able to afford it after paying for the lost investment. Miss Bliss loses her temper and scolds the class. All the kids feel really bad about the whole thing and try to think of ways to pay her back. Miss Bliss thinks of a way. She brings the potatoes to school and wants the kids help her sell them to earn back the money.

It's Parents Week at JFK Jr. High. Lisa is worried that her parents will find out she wears makeup at school. Miss Bliss assures her in a roundabout way that she won't tell. Nicki is worried that her parents will be disappointed in her and Lisa reassures her that they'll always be proud of her. Screech is worried that his parents will find out that he's not the coolest guy that he's told them he is. Miss Bliss reassures him also. He tells his parents the truth and they understand. That afternoon, Zack's father shows up to meet Miss Bliss and it turns out that they've met each other before on a special weekend trip on which they exchanged first names only. They are surprised and pleased to find each other again until Miss Bliss discovers that he's Zack's father. He tries to charm her and even kisses her--and just then Zack walks in. They try to explain and Zack's father invites her to go out to dinner with them. She is reluctant, but Zack says he doesn't mind. In the next s

Screech's friends encourage him to stand up to bully Deke Simmons

The kids convince Miss Bliss to ask Mr. Belding to bend the school rules and allow them to have an 8th grade dance. Mr. Belding reluctantly agrees if Miss Bliss will chaperone the dance. She says she can't as she already had a date for the evening. Mr. Belding won't allow the dance unless she agrees to chaperone so she finally says she will. When she tries to break her date, he assumes she wants him to come with her, so she ends up bringing him to the dance with her.

It's Hoosier Harvest Week and in Miss Bliss's words: ""...a time for hay rides, bonfires, and practical jokes."" In her eleven years at JFK, nobody has ever been able to play a successful prank on Miss Bliss, so all the kids want to be the one to get her this year. After a few unsuccessful pranks, someone does manage to get Miss Bliss. All evidence points to Screech as the culprit. Miss Bliss decides to use this as an opportunity to show how the judicial system works by putting Screech on trial. Zack is Screech's defense attorney, Nicki is the prosecutor, and Miss Bliss is the judge. Screech is found not guilty, but then who is the real culprit? It turns out that Miss Bliss played the prank on herself. Nobody was paying attention in class so she staged the prank in order to have an excuse for the trial. Everyone would have to study the chapters of their textbooks on the judicial system in order to learn the procedures for having a trial. After class, while she's talking to Scr

Zack and Nicki are in the middle of an argument when Miss Bliss assigns them to work on a project together--to convince people to buy a telephone as though it were a new invention. They do not want to cooperate with each other. Nicki is insistent that they do it her way so Zack backs off and lets her do it her way.

On the first day of school, Zack is surprised to meet up with a girl with whom he'd had a little summer romance. She was in the 9th grade and he'd lied to her, telling her he was also in the 9th grade. He tries telling her more lies, such as that he has a driver's license and is in a special 9th grade homeroom. He had been elected a class representative, but resigns so that he will not have to appear in front of the assembly as an 8th grader. Miss Bliss catches on and urges him to tell the girl the truth. He finally admits the truth to her, but only after she guesses most of it for herself. She is angry and refuses to have anything more to do with him.

The students are in a frenzy when they learn Stevie (a popular female rock star who was a former student at JFK) will be coming to perform for the kids at the school. Zack makes a bet with the others that he can get a kiss from Stevie. Stevie wants to sing to one special student at JFK. Zack, using his usual sly ways, starts a scheme that leads many, including Stevie, to believe he is dying, so that Stevie will choose to sing to him. Stevie does choose Zack, but when Zack is caught in his lies by Miss Bliss, Screech is given the chance to have Stevie sing to him. Zack, feeling bad about what he has done, goes to Miss Bliss's house to apologize. There he meets Colleen, who is actually Stevie without her rock star get-up on, and who is staying with Miss Bliss while in town. After talking to her for awhile and confessing about his bet, Zack earns a kiss from Colleen. However, Zack leaves Miss Bliss's not knowing he has actually kissed Stevie! During the concert, Stevie approaches Zack

Zack is flattered to be chosen as a pledge by the Rigmas, an exclusive club. Zack is willing to do just about anything in order to get the red jacket that is a sign of club membership. Most of his friends agree that it's worth it, except for Nicki. He has to do some embarrassing tasks and eventually even his friends think it's gone too far. Meanwhile, Miss Bliss is acting principal for the week, while Mr. Belding takes over her teaching duties, so that she will have the experience necessary to take over if Mr. Belding is ever not there. Miss Bliss loves the job and seems to makes it look too effortless, handling every problem that arises with ease. Mr. Belding, on the other hand, has a lot of difficulty with his teaching duties. He feels even worse when he sees Miss Bliss handling his job so efficiently.

Miss Bliss's former history teacher, Mr. Lyman, comes for a visit. He was an innovative teacher and taught Miss Bliss to be innovative as well. She feels she learned everything she knows from him. Since she needs to have some free time to write some reports, she convinces Mr. Belding to hire him as a substitute.