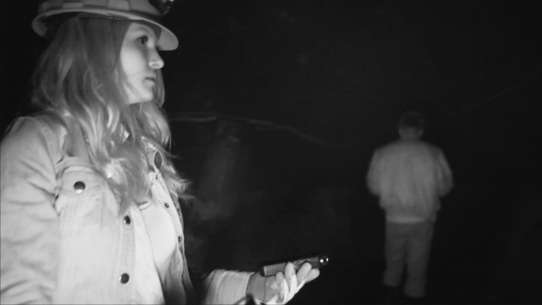 The BEST episodes of Ghost Mine

Every episode of Ghost Mine ever, ranked from best to worst by thousands of votes from fans of the show. The best episodes of Ghost Mine!

In the remote woods of Oregon lies one of the richest gold mines in the United States that was abandoned 80 years ago when a series of tragedies gave it an infamous reputation for being haunted. Now, a new owner has decided to take on the notorious legend and reopen the mine, assembling a colorful team of miners – both seasoned and new – to battle the elements along with a pair of experienced paranormal investigators, in hopes of finding a fortune. This strong-willed and superstitious group of miners will face the day-to-day challenges of mining, aided by the paranormal investigators who unravel the mysteries surrounding the mine, including historic Masonic connections and a spirit who has been known to haunt the area for generations.

The miners believe they are close to uncovering a mother lode; Kristen and Patrick believe they have what they need to solve the unexplained mysteries of the Crescent.

Stan leaves Eddie in charge; Patrick and Kristen check out a mysterious mine in Arizona.

Season 2 begins with the crew of the Crescent hoping for a bit of normalcy as they return to work, but something strange occurs after they start blasting through new tunnel walls.

Two miners claim to have experienced something paranormal while working in the mine, which leaves them feeling frightened. After hearing their story, Patrick and Kristen encounter a mysterious "phantom wind", which leaves proof to the miners claim.

The miners vote to begin work in the new shaft, despite concerns raised by Kristen and Patrick, who fear an evil presence is lurking inside the old tunnel.

#6 - Ghosts of the Geiser Grand

Patrick and Kristen's paranormal investigation takes them to the Geiser Grand Hotel in Baker City, Ore.

Mysterious power failures in the mine leave one of the paranormal investigators shaken; and Kristen turns to a Native American historian for help as she tries to figure out what's going on.

RIPA is destroyed in a blast caused by a mysterious fuse malfunction; reports of paranormal activity are on the rise; and the team turn up a chilling connection to the past while searching for a phantom intruder.

Patrick and Kristen make a discovery about the mine that leads them to believe there is a secret passage to another tunnel, which they set out to find.

A fire breaks out in the mine.

One miner runs away; the team use a robotic probe and makes an eerie discovery in the mine.

A breakthrough on the new drift leads the miners and investigators into a whole new layer of mystery.

It's time to get all aboard for Kristen and Patrick when their investigation into an EVP leads them to the Sumpter Valley Railroad.

Deep in the mountains of rural Oregon, something sinister lies within. Despite the warnings from local residents about haunted hills, this doesn't stop mine owner Larry Overman on his hunt for gold. Welcome to sleepy Sumpter, a former boomtown tucked in the peaks of the Elkhorn Mountain Range. Larry is the newest owner of the Crescent Mine, an eighty-year old abandoned mine rumored to be still chock full of that shiny, valuable gold… and possibly the spirits of some of its long-dead miners.

A new member of the crew helps break through the debris barrier in the recently discovered ballroom; and a lot of strange setbacks have the guys wondering what else could be in the mine.

The crew continue to look for evidence of an unseen presence in the mine.

#17 - Passageway to the Unknown

More mysteries are uncovered as they dig deeper into the mine.

New mysteries emerge, while the crew tries to use electricity to force the mine's malicious spirit to come out of hiding.