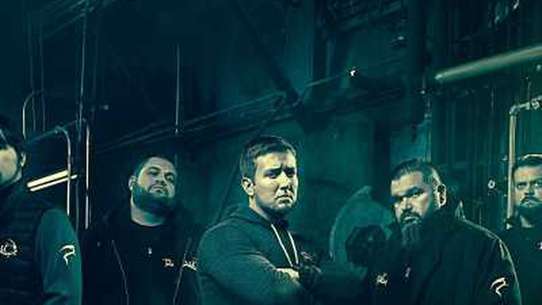 The BEST episodes of Ghost Asylum

A paranormal investigation team hunt for ghosts in asylums, sanitariums and mental hospitals in this reality series.

The Tennessee Wraith Chasers set out to trap the feuding spirits of a white supremacist and the head of a biker gang during the investigation of a penitentiary located in Moundsville, W.Va.

The TWC are the first team to investigate an old Confederate gunpowder and fabric factory, Sibley Mill. Some say to be the most haunted location in the South.

TWC returns to their home state to investigate Brushy Mountain State Penitentiary, which held some of the most violent criminals in Tennessee, including it most infamous inmate, James Earl Ray, who assassinated Martin Luther King. In the order to trap the former inmate of a little person named Jack Jett who was stabbed 19 times, the guys build a "Wraith Fog Trap" with four spinning lasers that projects onto a moisture-rich thick fog to draw entities in, transforming into electricity with a Jacob's ladder.

In Mansfield, Ohio stands a family monument to tragedy and ghostly activity, The Bissman Building. The boys are put to the test when challenged to prove reports of a dark portal in the building, and uncover the truth about some brutal deaths.

Haunted Fenwick Plantation is one of South Carolina's most paranormally active locations with a treacherous 300-year-old history. The boys are hunting for the spirits of pirates, spies, and a headless horseman said to still roam its grounds.

Stranded on a river island our team is trapped and has 48-hours to investigate terrifying Fort Delaware, a former civil war POW camp that claimed the lives of 1 in 4 prisoners. The boys try to solve the ghostly feud of two civil war generals.

An abandoned hospital in North Carolina is explored by the team, who investigate anecdotes about the building luring people inside and driving them insane.

TWC travel to Kentucky to be the first paranormal team to investigate the Old Crow Distillery, where they made Old Crow Bourbon. The buildings now stand abandoned and haunted by Dr. James Crow, who died in his on-site cabin in 1856 and a worker who was crushed by a freight elevator. In order to trap their spirits, the guys build a containment device called a "Wraith Casket Trap", a metal coffin with ultrasonic sensors, an IR camera, and Porter as a trigger object, lying in wait for a ghost.

The Tennessee Wraith Chasers are in Memphis where they take a look around an American Marine Hospital.

The Tennessee Wraith Chasers prepare to trap the spirits of tuberculosis patients who died at Waverly Hills Sanatorium.

At a former boys' school and experimental hospital, the TWC try to make contact with the spirit of a murdered girl and rid the basement of a demonic entity.

The Tennessee Wraith Chasers investigate an infamous Alabama jail with a dark history of racial prejudice and unauthorized executions. The boys come to make contact with the victim of a brutal lynching and a prisoner who was burned alive.

Tonight the Tennessee Wraith Chasers are on the hunt in one of the Northeast's deadliest locations, Rolling Hills Asylum. Tragedy and mistreatment transformed a place that was supposed to help the needy into a hell house of despair.

The team investigate Mansfield Reformatory in Ohio and explore the prison's history of torture, assault and suicides.

The Tennessee Wraith Chasers board a haunted battleship that served in the Vietnam War. Their goal is to set free the spirits trapped on board, including a disturbed poltergeist, but the elusive entities seem to have other plans.

The Tennessee Wraith Chasers return to Old South Pittsburgh Hospital, the site of their very first paranormal investigation. Now with more experience, the boys hope to uncover the true identity of a menacing shadow figure that roams the empty halls.

Known as the "Southern Gates of Hell" TWC is on the hunt at Sloss Furnaces in Alabama. While on the job this ghastly metal foundry claimed the lives of countless workers by either burning or gassing them to death.

The Tennessee Wraith Chasers visit Missouri State Penitentiary, one of the oldest and most haunted prisons in the Midwest. They seek to banish the spirits of two sinister child killers who still infest the ghostly cellblocks.

The Tennessee Wraith Chasers go to Hawaii to investigate an abandoned resort built atop sacred land that spirits have roamed for centuries. Challenged with a new culture and traditions, they must find a way to connect with the ancient entities.

The Tennessee Wraith Chasers journey to California to investigate the state's first reformatory school and find answers to two of its most mysterious deaths.

This week, the team travels to Oklahoma City to investigate an evil asylum known as St. Vincent’s Mental Home. A history of horror seems to have created a dark energy that is haunting these halls. Now, St. Vincent’s sits abandoned waiting for TWC.

The Tennessee Wraith Chasers are in Florida at one of the most haunted forts in America. They attempt to make contact with the disembodied head of a Seminole Indian chief and a pair of doomed lovers caught in a vicious love triangle.

The Tennessee Wraith Chasers are the last people to explore a horrific asylum where more than 10,000 patients died. With mere days left until it is demolished, the boys must work fast to reach the spirits who still call the Illinois hospital home.

Hill View Manor is known as one of the most haunted buildings in Western Pennsylvania. TWC are here to find and trap the spirits of two suicidal patients, and a gargoyle that lurks in its shadows.

The team investigate the dark history of an asylum in Ironton, Mo., and the local legend of a nurse who was killed on the premises and now allegedly haunts the halls.