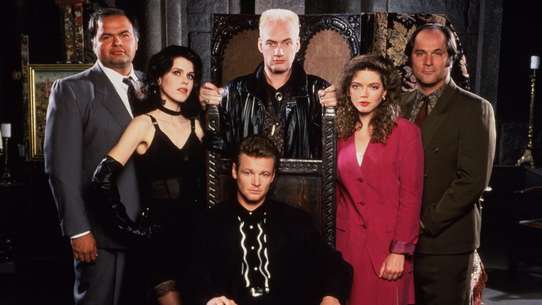 The WORST episodes of Forever Knight

800-year-old vampire Nick Knight quests for redemption as a cop in Toronto, trying to hide his vampiric nature from the rest of the world.

A suicide of a friend and colleague causes Natalie to reexamine her life and her feelings for Nick. Nick, too, is dealing with the loss of a friend, and his own feelings and reactions. When Natalie confronts him, Nick makes some decisions that will have far-reaching implications in all of their lives.

Life imitates fiction when Emily Weiss, the best-selling author of a series of vampire novels, is attacked by a crazed fan. Her works are amazingly true to life, leading Nick to believe that she may know more about the vampire community than she says. LaCroix, the leader of the community, sees her as a threat and declares that she must die and Nick must carry out the decree. Nick, however, finds that he is falling in love with this woman. She is the only mortal capable of understanding what it is like to live in eternal darkness, and she would go willingly into his waiting arms if asked. The time has come for the truth and the fiction to become one, and her fate rests in Nick's hands.

When Nick saves Schanke's life during a fire fight, Schanke can't help but notice Nick has taken up flying. Despite Nick's hypnotic suggestion to forget what he saw, Schanke begins investigating Nick's past. Natalie can't deflect him and Janette's attempts to hypnotise him fail. The trail soon leads him to conclude his partner is a vampire and from there to LaCroix. The question is, what is LaCroix going to do with the inquisitive Schanke?

While investigating a series of bizarre murders, Nick discovers that an ancient evil from his past is behind the crimes. LaCroix, his former vampire master, has returned to the city in search of Nick, his one-time pupil The murders, coldly orchestrated by LaCroix, threaten to uncover Nick's sinister secret when he is arrested as the prime suspect. With the hel of his partner, Don Schanke, and the department pathologist, Natalie Lambert, the only mortal who knows his true identity, Knight escapes. Now an outlaw, he must track down the killer and find LaCroix before he is forced to give up his dream of regaining his mortality.

Upon leaving his wife, Schanke moves in with Nick, expecting to lead a wild bachelor's life with his partner. But the two are soon at odds over the investigation of a wealthy business-man's murder. Feeling that Nick is once again trying to keep one step a head of him, Schanke vows to solve the case on his own. Acting on a sudden revelation while drowning his sorrows in liquor, Schanke rushes to apprehend the murderer without his partner and captures the killer single-handedly. Or, so he thinks.

The two day search for Natalie Lambert's young goddaughter ends when the child's body is discovered in the woods. After Nick Knight rescues the alleged killer from an angry mob of vigilantes, a blood test and line-up fail to provide enough evidence to hold him. Removed from the case because of her ties to the victim, Natalie questions the results of the lab work. When the suspect suddenly dies, Natalie performs her own lab test and uncovers another murder.

Nick goes undercover to investigate the murders of members of The Twelve Steps, a support group for addicts. Can his sponsor help him with his addiction, or is she out to kill him too?

During a hostage situation at the police station, Nick recalls his life in East Berlin (as the American Nick Thomas), where he helped another family in crisis while they helped him search for the Abarat, an ancient book of miracles that may contain a cure for vampirism.

Highly respected parole officer, Casey Brooks, is the prime suspect in the investigation of a murdered Vietnam veteran. Nick Knight is certain he has encountered Brooks in the past and flashes back to wartime Vietnam to discover Brooks' true identity, along with the dark secret that could ruin the parole officer's career. But the investigation changes course when Nick's prime suspect nearly becomes the next victim.

Pop star Rebecca has a new hit video in which she kills off her fans. When a fan's body is found in her hotel room is it life imitating art or just another imitator?

When a serial rapist is ripped to shreds by a dog, Natalie suspects that something isn't quite right. Nick's investigations leads him to suspect a carouche, a lower form of vampire who typically feeds on vermin, may be behind the dog's behavior. When Nick finds the dog, he discovers that it is the devoted companion of a blind dispatcher. Now he must figure out how to protect the dispatcher (and everybody else) from her not-so-mortal dog.

When Nick's efforts to stop a robbery without using his "vamp" powers causes a death, he is consumed with guilt. His life seems to spin out of control and nothing seems as it should be. Things truly become curiouser and curiouser.

A journalist covering the mayoral election is electrocuted in his hotel room. Later his girlfriend is found dead too. It appears one of the candidates may be involved in a sex scandal. Can Nick find out who committed these murders without engaging in a witchhunt? Dirty politics and mudslinging gets Nick thinking about when he was Professor Nicholas Girard (Chicago, 1954) -- and on trial before the HUAC on charges of being a Communist.

Nick and Schanke apprehend a convicted murderer on the run from Texas authorities when an anonymous tip leads them to a rental car agency. Nick believes she may be innocent; but he must prove it before she is extradited and put to death for her crime.

While investigating the murder of a virtual reality software designer, Nick finds the vampire game he created fascinating. Inside the game, Nick finds the killer waiting, daring him to try and find him. Playing the game he searches for clues, but finds himself intoxicated by the vampire feeding instead, feeling his lust for blood and killing reawaken. The closer he gets to solving the crime, the closer he gets to wanting to losing control and killing again.

When Schanke's ex-partner Delehanty shows up, his rich, comfortable, and "warm" life in Arizona, gets to Schanke's winter-worn heart. When Schanke and Delehanty conclude that a series of deaths are the result of product tampering, Nick's hunch about the case drives a wedge between him and Schanke. When Schanke refuses to listen to Nick, he must solve the case despite Schanke and Delehanty's conclusions, and before Schanke decides Arizona might be the place to be.

A drive-by shooting could ignite a gang war, but Schanke's got stars in his eyes moonlighting on a movie set. Then the star of the movie steps right into the killer's path. Will Nick and Schanke find the renegade killer before this movie star is history?

A crazed killer using a flame-thrower to torch his victims sends Nick and Schanke on an underground pursuit. In the confined quarters of the underground sewer system, it's anybody's guess who will find who first. While Nick faces his fear of fire, Natalie discovers she has her own fears to deal with.

Schanke's old partner is gunned down in the street. The bad guys make it clear Don is next. Jeanette lets Nick hide Schanke at The Raven because his predicament reminds them of when Nick, Jeanette, and Lacroix were hunted- only this time it appears to be an inside job.

A man is killed in an apparent mob hit. While the investigation is underway, the only witness, a young girl named Lisa, is left in Nick's protective custody. This duty reminds Nick of a boy he and his Old Friends cared for in World War II England and the ramifications of his immortality and sterility.

When an airplane transporting a bombing suspect and Schanke explodes, Nick becomes racked with guilt. He feels it should have been him on the plane and not Schanke. Nick turns in his badge, ready to move on to a new life. He decides to return when other police stations in the city start exploding.

The investigation into Stonetree's recent shooting of a perp is keeping him up nights. Meanwhile Nick confronts a ghost of his own -- one that's about 300 years older.

Natalie's research leads her to believe she might be able to cure Nick, if he's willing to take the risk. While taking the wonder drug, Nick and Schanke unofficially investigate the suicide of another cop.

Soon after a psychopathic killer, Peter Barlow, escapes from a mental institution, a patient's body is discovered on the hospital grounds -- the victim of a brutal and vicious murder. The following day another patient's body is discovered. Both crimes match Barlow's M.O., and Nick Knight is determined to prevent another murder. But, Nick's quick arrest of Barlow proves there is a different killer at large. Now he must find a new connection between the victims and the murderer.

David Constantine is the next in line to become "Don" of the city's biggest crime family, but after witnessing a lifetime of killing and bloodshed, he just wants to live a normal life with his family. Nick Knight understands David's dilemma, as he wants to get away from his self-proclaimed father, LaCroix. However, David's great grandfather will stop at nothing to ensure his grandson's enshrinement, even going to LaCroix for help. This sets up a Father's Day showdown between David and his great grandfather and Nick and LaCroix.