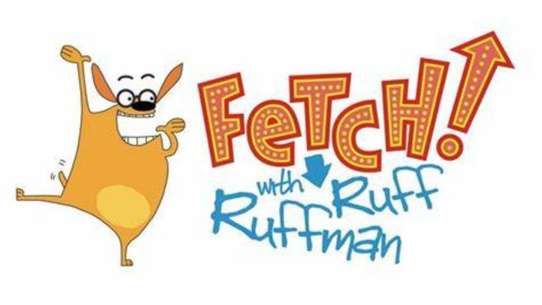 The WORST episodes of FETCH! with Ruff Ruffman

FETCH! is a reality-based game show where young contestants take on various challenges to gain points.

Sam & Sammy go to the MSPCA and make a promotional video. Jay & Noel are taught by a famous card stacker how to build a tower of cards.

Sam & Harsha are sent to a grocery store to compete in a grocery-bagging showdown. Jay & Sammy are sent to the ocean floor in the Florida Keys to search for a Ruffman family treasure.

At the request of his nephew Glen, Ruff sends all the FETCHers on a Live Action Role Playing mission while dressed as Elves, Dwarves & Wizards.

Noel & Harsha are given singing lessons to prepare them for a LIVE performance. Sammy & Sam are tasked with helping Ruff reduce his consumption of electricity.

Noel, Sammy and Jay are sent to Thompson Island where they learn about insects and their habitats. Harsha goes to New Mexico and learns about Pow Wows.

A new mystery must be solved when the FETCHers find out that Ruff's Uncle MacRuffmantosh is back.

DJ & Sammy learn how to square dance. Jay & Harsha learn about gorillas and all about their habitat at the zoo.

Sam, Noel & Harsha are tasked with building a structure that can protect a tortilla chip and Grandma Ruffman's cake. Sammy goes to NYC's Spanish Harlem.

DJ, Sam & Harsha go to the beach to create a sand sculpture. Jay goes to a salon and learns about hair and beauty.

The FETCHers go to Washington D.C. to be trained as secret agents.

Sam goes to a high-level meeting with Senator Ted Kennedy. DJ, Sammy & Noel are tasked with designing a float for Ruff's political campaign.

Sam, DJ & Jay are taught how to fight stains by a chemistry expert. Noel goes to a fire academy to learn how fire fighting is done. In the end, Noel goes to the site of a fire to save Ruff's kibble from burning!

Ruff sends two FETCHers to Utah to learn about bighorn sheep and their habitat. The other two get to learn to how to be sheepherders.

Tracking skunks and using chemistry to neutralize skunk spray is the activity of two of the FETCHers. The other two become junior lifeguards and learn to "brave the waves".

It's the grand finale and Ruff may be going to jail for stealing the FETCH Grand Prize! The kids compete in a series of elimination games to become the FETCH Grand Champion. Blossom disguises as Scruff, gets the grand prize fom Scruff's assistants and gives it to Ruff, meaning Ruff doesn't go to jail.

Ruff's grand prize has been stolen! Ruff sends the all the FETCHers to a forensics lab to solve the crime.

Ruff has two things that are mistakenly at the same time- throw the first pitch at a baseball game and go to Europe for a party for his fashion cousin, Helga. So, he hires someone to dress up like him and throw the pitch while he goes to Europe. He soon realizes he accidentally put his clothes in the trash and his trash in the dry cleaning. After the party, Helga tells Ruff he can no longer go to Europe unless he can get some fashion sense, and the Ruff costume was so big the pitch was thrown badly. Ruff sends Mike out to the ballpark to learn the science of pitching strikes, and he challenges Bridget, Madi and Rosario to create high fashion for dogs. Willie and Nina stay behind.

Ruff discovers that his evil twin, Scruff Ruffman, has pulled off a major art heist. Ruff sends Bridget, Rosario, and Nina down into a cave to recover the missing paintings. He challenges Madi to be a trapeze artist. Willie and Mike stay behind.

#20 - How to Get Dogs and Doggerel in Better Shape

Ruff wants to impress Charlene, the poodle, so he sends Madi, Mike, and Willie to learn about getting fit. He sends Nina to learn the art of writing poetry. Bridget and Rosario stay behind.

Ruff challenges Nina and Willie to learn scuba diving to retrieve some stuff he lost. He then sends Bridget and Rosario out to learn about lobster trapping. Mike and Madi stay behind.

Ruff challenges Mike and Madi to write a song for Grandma Ruffman; Bridget and Willie go to Disney World to design a rollercoaster. Rosario and Nina stay behind.

Ruff is inspired by a dream about ranch dressing in a ten-gallon hat and sends all his FETCHers out west on a cattle drive.

In the second half of this two-part episode, Madi and Rosario travel by dogsled and snowshoe to the Continental divide, while Nina and Willie warn the countryside (Boston suburbs) that the Redcoats are coming. Bridget and Mike are still in the studio. Technically there is no Half-time Quiz Show" in this episode (due to the fact that this was a "Part two" episode), but Ruff gave Bridget and Mike a task to complete for the same number of points.

In the first of this two-part episode, Willie and Nina embark on a race following Paul Revere's famous ride through the streets of Boston. Madi and Rosario go to Colorado in search of the Continental Divide. Bridget and Mike stay behind.