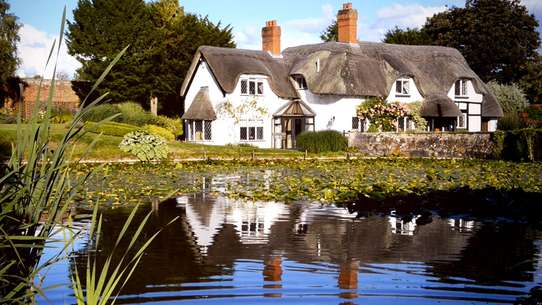 The BEST episodes of Escape to the Country

Jules Hudson helps a multilingual couple seek a translation to a more rural setting in the Herefordshire countryside. They have £500,000 to spend on their country relocation. Away from the property shopping, Jules visits the eco-friendly energy project that's hotting up in the county's woodland

Sonali Shah travels to Cornwall to help in the house hunt of a couple of retirees who are seeking a new life in the country. They have a substantial budget of £500,000 to fund their proposed rural move. Sonali also visits a Falmouth enterprise which is working to keep Cornwall's boat-building heritage alive.

Jules Hudson is house-hunting in Cornwall with a married couple from Berkshire who have a budget of £450,000 to find a rural Cornish idyll, complete with a five-bar gate. From country cottages to a medieval manor, Jules also makes time to explore the Grade I-listed Cotehele House.

Jules Hudson is in Wales helping a mother and daughter find a house where they can start a new life and a new business. With £555,000 to spend, Mum loves character features but the daughter is keen on clean, modern interiors. Will she be won over by Wales's rustic charms? And will an outdoor pool seal the deal?

A recently retired couple looking to downsize from their Essex home head to Staffordshire with Sonali Shah hoping to find peace, pubs and a detached home with a view. Sonali also visits a celebrated Victorian pottery that is now a modern-day hub of art, design and training. Jules also heads inland to inspect a plantation of trees normally found down under, and for the first time in his life, he tries an oyster!

Jules Hudson is hoping to find a couple the peace and quiet they crave in rural Herefordshire with a budget of £750,000. Away from the property hunt, Jules finds out what it means to own a piece of English history.

Alistair Appleton goes property shopping in Dorset with a buyer looking for a fresh start in the country. She has a budget of £380,000 to purchase a new 'forever' home. Alistair also goes fishing for seafood off the coast of Lyme Regis and samples some local whelks.

Nicki Chapman is on an emotional property shop in Somerset with a couple who have £400,000 to spend. While in the county, Nicki investigates some unusual excavations.

Alistair Appleton goes property hunting with a couple of returning expats. With a generous budget of £950,000 to spend, our buyers want to rediscover rural life in West Sussex. Away from the house hunt, Alistair explores the largest conservation project of its kind deep underground in the South Downs.

Jules Hudson helps a couple from the commuter belt realise their dream of moving to rural Somerset, with a budget of £450,000 to spend. Away from the house hunt, Jules witnesses the destruction caused by recent flooding.

Margherita Taylor is on a house-hunting mission in the Dorset countryside, helping a couple with £500,000 find a character property with space for entertaining and a baby grand piano, as well as an outdoor setting to keep a keen gardener busy. Along the way, Margherita heads out to the oyster beds of Poole harbour to discover more about how they are farmed and harvested sustainably to meet popular demand.

Jonnie Irwin helps a couple from County Durham who want to border-hop to the North Yorkshire countryside with their £600,000 budget and buy a spacious country home with land to accommodate rescue donkeys. While in the area, Jonnie gets a masterclass in building dry stone walls, a distinctive feature of this county's farming landscape.

Sonali Shah is in Cornwall to help a couple with a lust for life and a love of the coast find a home in the Cornish countryside on a £350,000 budget. Away from her very positive property hunters, Sonali heads to Tintagel Island, where exciting archaeological evidence suggests that this peninsula is not just a site of Arthurian legend but was also one of the largest trading posts in Europe.

Today's house hunt takes Nicki Chapman to the Devon countryside with a £450,000 budget, as she helps a buyer moving on to a new, happier life chapter with her young son. Away from important property decisions, Nicki heads to the seaside town of Dawlish, where she joins in the local fun at the carnival that the community works hard to organise every year.

Jules Hudson is rural property hunting in Norfolk with a couple of retired accountants who want to invest their £550,000 budget in a character home that gives them countryside and community on their doorstep. Along the way, Jules discovers how boat building is going strong in Wells-next-the-Sea before trying his hand at sailing a traditional yacht off the Norfolk coast.

Alistair Appleton helps a couple from Newcastle who want to turn the spectacular Lake District from a holiday destination into their permanent home. With a budget of £750,000, they are looking for a property with fabulous views and enough space for visiting family. Alistair also takes to the water when he meets a passionate boat builder who restored what is thought to be the oldest passenger ferry in the world.

Sonali Shah is in Devon, accompanying a married couple from Berkshire with an impressive budget of £1,200,000. On today’s property shopping list is a five-bedroom detached property with land where their four children can enjoy the great outdoors. Away from the house hunt, Sonali visits a farm where she discovers that flowers are not the only way to her heart. Edible flowers are too.

Jules Hudson is on home ground in the Welsh Borders as he showcases some tempting houses to a retired couple who have a whopping £1 million to spend. Along with a characterful property, they are after somewhere with holiday-let potential or space for a glamping business. Jules is also in his element when he meets experts in traditional construction methods, who are keeping heritage building skills alive.

Nicki Chapman is in Suffolk, property shopping with a couple who have £425,000 to spend. But with one liking new builds and the other wanting character, can Nicki find a home that will suit them both? Away from the house hunt, Nicki learns about the county's silk-weaving tradition.

Jules Hudson travels through Gloucestershire on a house hunt with two sisters who are hoping to set up home together. On a budget of £750,000, they have a very specific wish list. While in the county, Jonnie takes a ride on the restored Gloucestershire Warwickshire Railway.

She's found her forever man, he's found his forever woman but will this couple from Bristol find their first forever house together? Denise Nurse is in Wiltshire with buyers who are looking for a party pad with a big kitchen, plenty of bedrooms for friends to stay in and land for a horse too!

Aled Jones is helping a couple from Wimbledon escape the suburbs for countryside living in East Sussex. Good rail and road links into London are crucial, and for their top budget of £580,000 they are looking for three to four bedrooms, a big kitchen diner for entertaining, a couple of reception rooms and a big garden. They have been looking for eight months already and have not found anything they like. Can Aled deliver their country house dream in just two days?

Nicki Chapman helps a couple looking to relocate their business and start afresh in the Cotswolds. However, they designed their London maisonette from scratch, so finding the right property will not be easy. Armed with a generous budget of £800,000, they are looking for a property with plenty of period character - but not a typical Cotswold cottage. They want a big living room and a minimum of three bedrooms, as well as an outbuilding to house their growing business.