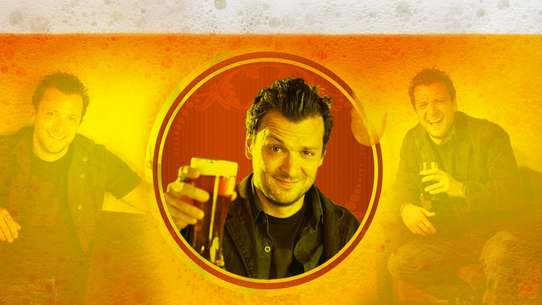 The BEST episodes of Drinking Made Easy

HDNet follows Lamprey as he completes a 53-city national comedy tour (also named "Drinking Made Easy") in which his entourage travels the US in search of the local drinks and drinking customs that have contributed to the birth, growth and distinction of our great country. Definitely a road trip unlike any other, visiting everywhere from the country's oldest brewery, Yuengling, to (arguably) the country's oldest bar, Jean Lafitte's Blacksmith Shoppe Bar. Hop on the tour bus and ride around from bar-to-bar from the comfort of your living room. Drinking Made Easy will be your guide to everything drinking-related in America.

Cape Cod is a beautiful peninsula of Massachusetts and is receiving a visit from Drinking Made Easy. The area is a popular tourist attraction for its miles and miles of beaches, historical sites, and natural attractions. Zane and Steve will be combing the beaches looking for the best brews, cocktails, and bars. Lots of competition in this episode with belly flopping, beer chugging, keg throwing, and dune jumping just to name a few.

Zane and Steve explore the historic city of Newport, Rhode Island and learn about rum running and local brews in this episode of Drinking Made Easy. Newport is home to one of the highest collections of surviving colonial buildings and is also known for its illustrious mansions, shopping, and scenery. But Zane and Steve are here for the booze. Though they will be able to partake in a lovely game of tennis, the drunken duo will be focused on sipping local brews and enjoying local drinking customs including the first ever Drinking Made Easy Beergatta Race!

On the season finale of Drinking Made Easy season 3, the guys head to downtown Los Angeles to find explore some secret bars, breweries, and even wineries! We dive deep into the Downtown underground to find some awesome speak easy bars as well as historic establishments that have survived the test of time to provide some great drinks. We also wrap up things up by announcing the winner of the 6-pack challenge for the season. For the first time, the boys are tied at the season’s end so who ever wins the next match wins the season!

Charlotte is the biggest city in North Carolina and is growing rapidly. With a great mixture of bars, lounges, and nightclubs, Charlotte offers plenty of options for entertainment and drinking. Many of these great bars can be found in Charlotte’s uptown district, which acts as the center of the city’s activity. In this episode, Zane and Steve will get to try some great breakfast and specialty drinks, relax and smoke some hookah, and face off in a death defying race down treacherous white water rapids. Ok, maybe not “treacherous” or “death defying” but rapids nonetheless! Oh and Pleepleus gets into a fight with a giant crab.

Zane Lamprey visits the Big Apple. He drinks at one of the city's oldest bars, the longest bar, and a bar that's location is a secret.

Zane, Steve and the Drinking Made Easy crew take on Tampa Bay Florida. They explore the rich cultural history of Ybor City, taste some of the fine locally crafted beers and spirits, play around on the bay and get “fired-up” with some unique nightlife. Tampa is the 3rd largest city in Florida and features a dynamic Cuban influence, a number of local distilleries and breweries, and is the birthplace of world the famous Hooters Restaurant!

Drinking Made Easy heads to Maine’s largest city, Portland. As always they will explore the best drinks of the area as well as visit some unique breweries and fermentories that make use of rich local ingredients and employ unique strategies the making of their beverages. This cozy water-front city has a large amount of local influences in their beers, their bars, and the cocktails.

Zane visits Al Capone's own Windy City. He drinks a 'French 75' at the Green Door Tavern, has a $200 Cloud Gate Martini at Tavern At The Park, and an Apricot Margarita at Chicago's most intimate bar, The Matchbox.

Zane Lamprey visits the Mile High City. He visits the home of Fat Tire, hits his limit at Rio Grande, and watches his buddy Steve compete in a bull ball eating contest.

Zane Lamprey visits the SLC. He visits Utah's oldest bar, dispels the myths about drinking in Utah, and learns the difference between vodka and whiskey.

Zane Lamprey heads to wine country. He makes fresh Limoncello, visits Rubicon Estates to meet with a Master Sommelier, and has a grape leaf eating contest with Steve.

Just because Hawaii is the newest state in the union doesn’t mean it was late to the party. Hawaiians have been distilling, brewing, and imbibing for centuries. Mix together one part laid back atmosphere, one part beach paradise, and mix in a plethora of fresh fruit, and you have a recipe for some delicious drinking. In this episode, Zane belly flops onto Hawaii’s second largest island, Maui. Follow him along the sandy path to find who is doing the best mixing, brewing, and hallucinating in this island paradise.

Zane Lamprey visits the City by the Bay. He meets with Fritz Maytag, who lead the craft beer revolution, drinks Fernet Branca upside down, and drinks on a mobile island.

Zane and Steve freshen up on their french as they venture to Quebec, Canada to explore what they have to offer the areas of beer, liquor, and nightlife. They will embrace the rich culture, see the sites, frolic in the countryside and enjoy the many great libations Quebec has to offer. Also, in the episode, Steve is Mime! Not a very good one, but at least he can’t say anything dumb, though somehow he still gets his points across.

In the final episode of season one, Zane returns home to Los Angeles. He drinks out of fruit at Paradise Cove, takes a flight at Blue Palms Brew House and stops by Musso & Franks, a Hollywood institution.

Drinking Made Easy continues its trek through the Alaska’s great wilderness and stops in Juneau in search of some great bars and beverages. Zane and Steve visit some of Alaska’s great historic places like the Alaska Hotel and Red Dog Saloon. The boys also fly and hike up to a glacier wall to do a bit of ice climbing.

Zane visits the 'Gateway to the West'. He drinks at the Famous Bar on Route 66, Chuck Berry's hangout 'Blueberry Hill' and tests his vodka knowledge at Sub Zero Vodka Bar. He tops it off at St Loius' first dessert bar called Bailey's Chocolate Bar, with a Hot Chocolate Martini and a Cinnamon Stout Shake.

Drinking Made Easy is back with a brand new season of travel and drinking. To kick things off we start in Houston, the largest city in Texas and fourth largest in the United States. Zane Lamprey and Steve McKenna will visit Texas’ oldest craft brewery, Saint Arnold Brewing Company, and check out some great mixology, dive, and party bars. The boys also get down and dirty with some pig scramblin’ and attempt a world record for the fastest firken race

Memphis is known as the ‘home of the blues’ and is the perfect place to find good music, rich history, great BBQ, and some hefty drinks. Zane and Steve will be taking on some of the biggest drinks available and even learn how to make Purple Sizzurp with Academy Award winning group Three 6 Mafia. This episode is full of infamous cocktails and great establishments, but be warned…Zane and Steve are handling guns in this episode…uh oh.

Zane hits Miami Beach, Florida, where it's time for some fun in the sun. He makes 40 mojitos in a minute at Lario's on the Beach, taps a cask of ale at premier beer bar Red Light Red Light and tries to cool off with liquid nitrogen at the Ritz-Carlton, South Beach.

Zane and Steve head to the ‘Country Music Capitol of the World’, Nashville, Tennessee. Nashville has been known as a sort of Mecca for country music but Zane and Steve have other things on their minds, namely, booze! The boys will be looking to taste some of that native Tennessee whiskey, locally brewed beers, and some Ole Smoky Moonshine. Join them as we learn the difference between bourbon and whiskey, how moonshine is made, and how they drink down in Nashville!

Located on the southernmost tip of the continental United States, Key West is the heart and soul of the Florida Keys. Its Caribbean vibe, year round sunshine, laid back lifestyle and Bahamian and Cuban influences help make Key West what is today: a great place for a tropical liquor-inspired vacation. At only 4 miles long and 2 miles wide, it was made for pub-crawling. From its proximity to some of the best rums in the world, to its lax open container laws and the abundance of bars and restaurants on the world famous Duval Street, Key West couldn’t be an easier place to drink.

This sprawling metropolis is a mecca for entertainment, food, culture and nightlife. From Downtown Miami to South Beach, this venerable hot bed of activity is overflowing with places to find great food and drink. Whether you’re looking for a trendy upscale hotel bar, a nightclub, or a local dive bar to catch a baseball game on the tube, Miami’s nightlife scene has something for everyone. Follow Zane as he stumbles across some of the city’s best mojitos, shares a cold one with a local legend, and explores the Miami’s sexy mixology scene.

Zane hits up 'Beertown' He goes to 'The Bomb Shelter' where he downs Turkey Gizzard Shots, sips a 'Pink Squirrel' at Bryant's and nails some strikes in America's oldest bowling alley at Holler House. He finishes up by 'Closing Wolski's'