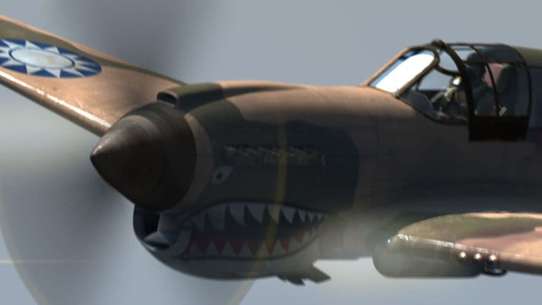 The BEST episodes of Dogfights

Every episode of Dogfights ever, ranked from best to worst by thousands of votes from fans of the show. The best episodes of Dogfights!

Using modern computer animation, great aerial and modern naval battles are recreated. In the process, you get to learn about the history of military aviation technology and the tactics developed to use them to their best advantage.

Legendary fighter pilot, Colonel Robin Olds, sets an intricate trap for the North Vietnamese MiG-21’s. His squadron, the Wolfpack, disguises its lethal F-4 Phantoms as vulnerable bombers. The MIGs scream in to challenge the Americans. The result is the most elaborate air sting of the war… code-name…Operation Bolo.

In the skies over North Korea, F-86 Sabres battle MiG-15s. American pilots such as James Jabara, Ralph "Hoot" Gibson, and Ralph Parr are in pursuit of a previously unknown achievement — the title of jet ace.

1943...the skies over the Pacific. The infamous Japanese Zero is decimating American aircraft. No allied plane can match Japan's deadliest fighter plane manned by killed Imperial Navy veterans. The American Navy rushes to deploy a new fighter to take on the unstoppable Zero...the F6F Hellcat. The Zero has met its match. Now, you're in the cockpit with legendary dogfighters Robert Duncan, Hamilton McWhorter and Alex Vraciu...their epic dogfights blazing a new chapter in the annals of aerial warfare.

The U.S. Navy's top fighter, the F8 Crusader flown by skilled fighter jocks Paul Speer and Phil Wood, tackles the fierce North Vietnamese MiG over the killing skies of Vietnam. Re-live one of the longest, gut-wrenching dogfights on record as Lt. Commander Richard Schaffert - out of missles and with his guns jammed - takes on a lethal MiG-17 and the best enemy pilot he's ever faced. He's got one chance - the amazing capabilities of the F8 Crusader, "the last gunfighter".

May 10, 1972, was the bloodiest day of air combat during the Vietnam War. American F-4 Phantoms, A-6 Intruders, and A-7 Corsairs fought against North Vietnamese MiG-21s and MiG-19s. The episode includes battles fought by Bob Lodge and Roger Locher and by Charles B. DeBellevue.

Air Force fighter pilots risk their lives flying sleek F-86 Sabres above “Mig Alley” – the most dangerous piece of sky in the Korean War. The high-speed twists and turns of history’s first jet dogfights pit American aces Robbie Risner and Ralph Parr in the battles of their lives against nimble Russian-built MIG-15 fighters.

It's where a pilot can ill afford to make a mistake...but where dogfights are inexorably drawn. Down on the deck-at treetop level-the margin for error is zero.

Pilots of the Israeli Air Force. The episode covers combat missions flown by Ran Ronen and by "ace of aces" Giora Epstein. Ronen used the French-built Mirage III to engage Hawker Hunters. Epstein flew a Mirage against Egyptian Sukhoi Su-7s in the Six-Day War, and piloted a Nesher against MiG-21s in the Yom Kippur War.

In the European and Pacific theaters of World War II, the P-51 Mustang became one of the conflict's most successful and recognizable aircraft. The episode includes interviews with Mustang pilots Donald S. Bryan, Robert Scamara, and Richard Candelaria.

The rugged P-47 Thunderbolt, or "jug" as it was known, was the largest single-seat fighter plane of World War II. The episode portrays aerial battles fought by Robert S. Johnson, George Sutcliffe, and Ken Dalhberg against Focke-Wulf Fw-190s and Messerschmitt Me-109.

#15 - Dogfights of the Middle East

The era of missiles had arrived, and electronic warfare was coming of age. But when technology failed, pilots were forced to fight the old-fashioned way — with guns. Clinton Johnson and Charles Hartman down a MiG-17 with propeller-driven A-1 Skyraiders; Robert Titus and Milan Zimer's F-4 Phantom shoots it out with a gun pod against MiG-21s; Darrell Simmonds and George McKinney's Phantom fights MiG-17s.

On April 7, 1945, pilots of the German Sonderkommando Elbe ram their own aircraft into incoming American bombers.

Towards the end of World War II, Japan sent volunteer pilots on suicide attacks against American naval targets. Kamikaze attacks covered include those against the escort carrier USS St. Lo on October 25, 1944, and the destroyer USS Laffey on April 15, 1945. Also discussed is the use of Japanese Ohka rocket planes.

The Tuskegee Airmen were African-American pilots of the 332d Fighter Group. They distinguished themselves as one of the most successful fighter groups of World War II, despite the bigotry and prejudice they faced from their own countrymen. Piloting P-51 Mustangs, they flew many missions protecting American bombers from the German Luftwaffe. The episode includes interviews with pilots Lee Archer, Roscoe Brown, and Charles McGee.

The skies over Vietnam. They fight in a supersonic world, where split second decisions determine if they live - or die. American F4 Phantom pilots Fred Olmsted and Dan Cherry take on the famed MiG-21 - the most feared threat in the sky. And one American, Steve Ritchie, becomes a dog fighting legend as an Air Force Ace. You're in the cockpit with some of the fiercest dogfighting ever seen in Vietnam!

The Luftwaffe's last great offensive, called Operation Bodenplatte, occurred on January 1, 1945. Bob Brulle, Sanford K. Moats, Alden Rigby, and Richard Creamer were American pilots of the 352d Fighter Group whose airbase, known as Y-29, was attacked by fighters. After this day, the Luftwaffe was shattered as an effective fighting force.

1944...the Pacific. It is one of the most amazing, lopsided naval battles in history: A mighty Japanese fleet let by the Yamato, the biggest battleship in the world - versus Taffy 3, a small U.S. task unit of tin can destroyers and baby flat-tops...ships too weak to fight and too slow to run. David battles Goliath in a fight for survival - with the lives of thousands of American soldiers in the balance.

Plot Outline Two weeks after Pearl Harbor, a courageous, rag-tag band of American mercenaries dare to challenge the overwhelming might of the Japanese Air Force. The legendary “Flying Tigers” slash through the skies of China, and help vanquish the unstoppable Japanese. Follow leading Tiger aces Tex Hill and John Alison as their P-40 Tomahawks fight to the death against the agile Japanese I-97 Nate.