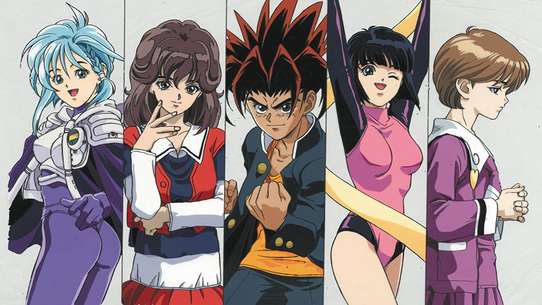 The BEST episodes of DNA²

Every episode of DNA² ever, ranked from best to worst by thousands of votes from fans of the show. The best episodes of DNA²!

Karin, a DNA operator from the future, is on a mission to change the course of History by stopping Junta Momonari from becoming the Mega-Playboy who fathered 100 children and led to the overpopulation of the world. But Junta is no playboy; in fact he is allergic to girls. But when Karin shoots him with the wrong DNA-altering bullet, he starts sporadically becoming the Mega-Playboy capable of charming any woman. Karin must try to restore the situation to normal before the change to Mega-Playboy becomes irreversible.

A girl from the future, Karin, prepares to return to the present day. She is a DNA manipulator - she can affect subatomic particles with the aid of special DNA bullets. Karin takes off in her time ship on a special mission for the future's government. In our time, high school schmuck Junta is trying to keep his cool at the apartment of school sweetie Tomako. Her flirtations cause Junta to barf - it seems he is allergic to girls! Junta leaves, vowing to someday beat his affliction and have a real relationship. Meanwhile, Karin arrives, and suspects Junta of being the Mega Playboy. However, she is doubtful after observing his reaction at Tomako's. At home, Junta bemoans about his fate to Ami, his childhood friend and the only girl who doesn't make him puke. The next day, Tomako and her real boyfriend Ryuuji have a fight because Ryuuji believes their "DNA wants them to be together." Junta is confronted by Karin, who forces him, at gunpoint, to go to a coffee shop with her. Once there, Karin tells hem all about her mission to stop the Mega Playboy. Seems the Mega Playboy sired 100 children, who each sired 100 kids, who each sired 100 children, and so on. This has caused a population explosion crisis in the future. So she is here to stop it before it begins. Karin informs Junta his DNA hasn't manifested yet, but shoots him anyway. She leaves, congratulating herself on a job well done. But Junta revives and winds up at Tomako's house. Will he become the Mega Playboy now, or simply spew again?