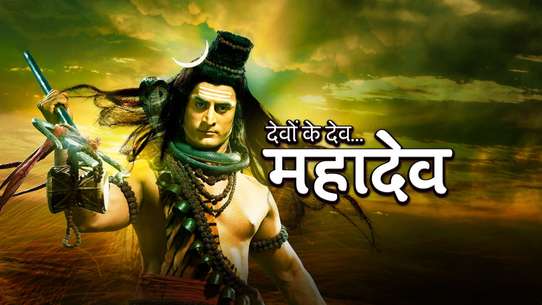 'Devon ke Dev... Mahadev' is a mesmerizing, visually stunning story of Lord Shiva and his avatars. Witness the Lord as a sansarik or householder in this Hindi mythological show.

Khyati pleads Sapta Rishi Bhrigu to talk to her father about subjugating the crudity of Sati's punishment. A displeased Prasuti tries to bring alive the caring father hidden behind King Daksh's heartless principles. But, Daksh dismisses her pleas as he is too immersed in his plans to destroy Shiva's existence. Goddess Lakshmi reminds the Gods about Daksh's daughter, Sati , a descendant of Goddess Shakti, who will become Shiva's consort.

Lohitang is eager to attack Mahadev. He vents his frustration in front of Dev Kampan on recalling Mahadev. On Lohitang's insistence, Dev Kampan enlightens him about Lord Vishnu, Lord Brahma and Mahadev. Lohitang refuses to believe in Tridev's powers, and is adamant on conspiring against them. Dev Kampan advises Lohitang to meet Rishi Dadhichi's son, Pippalada. Lakshmi assures Mahadev of her support. Mahadev asks Pippalada to enlighten Lohitang about him.

Mahadev and Parvati want to protect the citizens of Durdumb's kingdom. Gangey and Uma's parents pay their gratitude to Mahatap(Mahadev) and Gayatri(Parvati) for rescuing them from Durdumb's soldiers. They show their hospitality towards Mahatap and Gayatri, and inform them about Durdumb's atrocities against the citizens. Acharya Gyan Murti supports Durdumb in misleading the innocent people. Mahadev asks Ganesh and Kartikey to take care of Saraswati. He learns about Acharya Gyan Murti's misdeeds.

Mahadev accepts Lord Vishnu's challenge, and fights with him. The deities worry about the war and its consequences. Daksh worries about Sati's ailment. Mahadev becomes emotional after attacking Lord Vishnu with his trishul. He ceases the war. Lord Vishnu reveals to Mahadev that he had plotted to fight with him for the welfare of the universe. Mahadev and Lord Vishnu reconcile with each other. Lord Vishnu succeeds in pacifying Mahadev. Mahadev blesses Vasuki and Garud. He takes Vasuki around his neck.

#7 - Sati Boasts Of Her Wisdom In Front Of Mahadev

Mahadev forbids Sati from eating the fruits of the forest. Nevertheless, she eats the same, and suffers. Mahadev helps her in recovering. Aditi feels relaxed after Khyati recovers. She suspects Shatbhish's Mantri for attacking Khyati. Daksh is worried about his daughters' wellbeing. Sati boasts of her wisdom in front of Mahadev. Rishi Bhrigu arrests Shatbhish's Mantri. Sati endeavours to seek Mahadev's assistance in coming out of the forest. She tries to impress Mahadev, but in vain.

Durgasur attacks Mahadev, in Kashi, and Kailash at a same time. Parvati takes the form of Goddess Durga, and kills Durgasur. Meanwhile, Mahadev gets released from his child form. Ravana destroys his palace and decides to construct a new one, which will be the base of his stronghold. He vows to enslave the mankind. Mahadev and Parvati advise Ganesha and Kartikey about their duties.

Janaka permits Lord Rama to lift Mahadev's bow. Sunayna objects to his decision, but Janaka persuades her to obey Lord Rama. Rishi Vishwamitra and Mahadev bless Lord Rama for his victory in the Swayamvar. Lord Rama proves his power by lifting Mahadev's bow. Sita becomes elated on seeing the same. The deities worry on seeing destruction in the universe, after Lord Rama breaks Mahadev's bow. Janaka announces about Lord Rama's marriage with Sita. Lord Rama and Sita get married.

#12 - Narad Is Elated To See Kartikay

Parvati apologises to Ganga for her mistake and expresses her inability to rescue her from her curse. Mahadev suggests a remedy to help Ganga to get rid of the curse. He blesses Prithvi. Meanwhile, Tarakasur receives information about Mahadev's son and is adamant to kill him. Narad feels elated to see Kartikay. While Parvati insists on going o Kailash with Kartikay, Mahadev persuades her to delay their departure.

Parvati requests Mahadev to take her near a waterfall. She asks him to give her some new names, which rhyme with his. Mahadev enlightens Parvati about the importance of love. Meanwhile, Ganesha panics on learning that his parents are not in Kailash. Nandi informs him that his parents are spending a good time, away from Kailash. Indradev panics on seeing Trishula's tapasya. In Mahadev's absence, Ganesha provides knowledge to the Shivgans.

Daksh exceedingly humiliates Sati by cursing Mahadev. She yells at Lord Brahma, Vishnu and Lakshmi for not protesting against Daksh's opinion. Later, Daksh gets infuriated by Sati's opposition and curses her. Sati decides to renounce her life for the sake of Mahadev. She tries to burn herself in the fire, but Prasuti stops her. Mahadev is annoyed to observe Sati's critical condition.

#15 - Dashanan Wants To Punish Himself For Not Fulfilling Mahadev's Desire

Mahadev sings a melodious raga to control the damage done by Narad Muni to the group of the singers. Sati is surprisingly mesmerized listening to this melodious raga. As if hypnotised by Shiva's song, Sati walks towards his direction. Attracted completely to the rhythm of Mahadev's raga, Sati dances to the song. Seeing Sati standing before himself, Lord Shiva leaves. Sati is in shock, unable to understand her state of mind. Narad Muni is elated seeing his cacophony work well.

#17 - The Spring Festival Embarks With Some Colourful Performance

Corroborating immense faith in Lord Vishnu, Daksh assures to protect the Gods from the attack of the asuras. Commencing the third phase of the Mahamandal, Daksh instills his faith in Chandrama to handle the Spring Festival without any hitch. Nandi is too distressed after Lord Shiva snapped at him for mentioning Sati's name and getting influenced by Narad's gossip. The spring festival embarks with a melodious and a colourful performance by Chandrama and Rohini.

Foreseeing the outcome of Sati and Mahadev's love, Madanike expresses her perturbed state asking Sati to watch out her feelings. Aware of her father's detest towards Lord Shiva, Sati comforts Madanike assuring her to avoid any unlikable situation. On Kailash, Mahadev ascertains Shilaad to address his concern and would render Nandi to him. A grief-stricken Nandi pleads Mahadev to let him stay under his hermitage but, Mahadev stays impervious to his pleas.

Daksh proposes Sati's marriage. Prasuti suggests Revati to stay with Chandrama. Revati informs Prasuti about Sati's love towards Mahadev. Prasuti conveys the same to Daksh but he does not agree with her. Sati throws the Rudraksh and orders the maids to close the windows to avoid the sight of Himalaya. Sati sarcastically tells Prasuti that she is happy. Prasuti sees the symbol of trishool on Sati's arm.

Prasuti is elated on seeing Sati and promises to fulfill her wish. Prajapati Daksh tells Sati to take rest and asks Revati the reason for her presence. Revati shows Sati the Nandavrata story book which she was looking for. Sati finds it hard to open the book and blames it on her fate. Sati is surprised to know that Daksh is planning her marriage. Prasuti tells Sati that she is very lucky to have a father like Daksh and asks her to agree to his plan.

#21 - Sati Renounces Her Life For The Sake Of Mahadev

Daksh's mahayagya ceremony gets ruined due to his strong opposition for Mahadev. Sati is inconsolable after facing Daksh's atrocities and vows to burn herself in the fire. Nandi is tormented on observing the coming catastrophe in Mahadev's life and seeks his help to rescue Sati, but in vain. Sati prays Agni Devta to burn her body, however Agni Devta denies her. Finally, Sati gains miraculous power and sacrifices her life by burning herself.

#23 - Parvati Invites The Devotees For Lunch

Mahadev and Parvati are felicitated by their devotees at Kailash. Lord Vishnu is glad to see Mahadev's love for Adi Shakti and announces about the destruction of evil power by Parvati. Tarakasur's men help him to conspire against Mahadev and Parvati. Parvati invites the devotees for lunch and asks them to regard Anna Devta. Him Naresh assures Menavati of Parvati's well-being. Parvati searches for Mahadev and worships his shivling. Mahadev renders his sadhana.

#24 - Mahadev Enlightens Parvati About The Importance Of Meditation

Parvati thanks Mahadev for his guidance. Mahadev enlightens her about the importance of meditation. He tells Parvati to recall about all his teachings, and asks Ganesha to take care of her. Vrinda tells Shukracharya that Jalandhar has not accepted his defeat. Shukracharya insists her to enlighten Jalandhar. Ganesha becomes happy on learning that Parvati will regain her memory, and convinces Kartikey that she will soon recognise Mahadev.

Seeing Shiva's aura,Sati wakes up from a dream clueless about the hidden significance of it. A perplexed Sati shares about her dream with Aaditi unable to hide her curiosity. As Sati describes about seeing a faint picture of an Ardhanarishvara, Aaditi calms her down. On the other hand, King Daksh hides his emotions for his daughter behind his traits of being a Prajapati. While in search of lotuses, Sati meets the sculptor community and fails to avert the strong presence of Shiva.