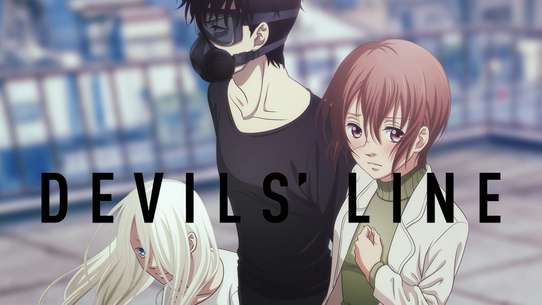 The BEST episodes of Devils' Line

Anzai, half vampire, and Tsukasa, a normal school girl. Vampires seem to be living among humans. Of course the government does not know of their existence, because their appearance does not differ from humans. They also do not need to drink blood, but when they get a craving or get angry, they can become uncontrollable monsters.

As Anzai is struggling to keep a distance from Tsukasa in order to protect her, she is kidnapped by a devil hunter.

Trouble arises and blood is shed as Tsukasa tries to make sense of her new lustful feelings towards Anzai.

Immediately after Lieutenant Ishimaru issues a deployment ban on devils from the CCC, the police force ends up in a risky situation.

Operations within the police force get shaken up as Lieutenant Ishimaru becomes the new leader of F Squad.

A sniper is out for revenge. Another random passing half-devil helps Anzai to recover by giving him a taste of blood.

Anzai takes refuge with Tsukasa after being suspended. Meanwhile, the authorities are on the lookout for a missing murder suspect.

After being involved in a risky situation, Tsukasa asks Anzai if they are dating. Will Anzai be able to control his bloodlust in a relationship with her?

Anzai's ability to control his transformation is severely tested as he is confronted by a person from his past seeking revenge.

Tsukasa is confronted about her relationship with Anzai. Anzai is called back into duty to take care of an emergency situation as he learns to accept his demon instincts.

Tsukasa thought she knew everything about Akimura. She's unsuspectedly rescued from half-devil, Anzai, who works with the police force specializing in devil-related crime.

Tsukasa is willing to risk everything to rescue Anzai. Anzai learns about his past as he recovers from his injuries.