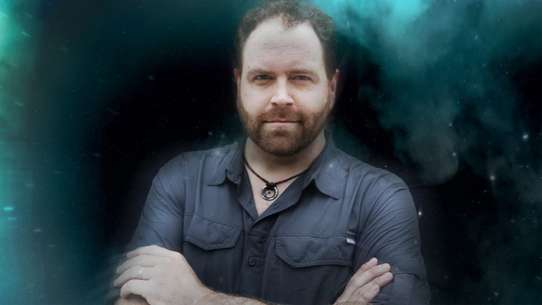 The BEST episodes of Destination Truth

Destination Truth is hosted by Josh Gates, the show takes viewers across the globe in search of answers. Every week Josh and his crew visit a different locale where he interviews witnesses in an attempt to get to the truth regarding some of the world's most notorious supernatural mysteries, like the Chupacabra of Chile and the Mongolian Fire Worm.

In the season finale of Destination Truth, Josh heads to Antarctica, a place he describes as, "the coldest and most unforgiving place on earth." Even though the continent has no permanent residents, many of the visitors to this arctic terrain have reported supernatural activity at an abandoned whaling station on a neighboring island. Similar reports have also come in about a place call Wordie Hut, also in the area. Josh grabs his gear, his team, and heads off to investigate.

Could Madagascar be the home to the beast known as the Fangalabolo, a bat-like creature with a monkey face? It's certainly possible since 90% of the species found on Madagascar are not found anywhere else in the world. Recent sightings of the Fangalabolo inspire Josh Gates to investigate. Zombie-like ghosts called Taotaomona are said to be roaming the island of Guam. Once revered by the Chamorus tribe of Gaum, these apparitions are thought to be the spirits of their ancestors. Recent reports, however, imply that the Taotaomona are becoming aggressive and attacking people.

Josh and his team search for Bigfoot-like creatures with mystical powers near a haunted Filipino church and the haunted Aokigahara forest in the shadow of Mount Fuji where campers have often committed suicide.

In Papua New Guinea, Josh hunts for a mermaid-like sea creature called Ri. In the next part, he searches for a dinosaur-like beast that lurks in the jungles near the village of Tinganavudu.

The closest human neighbors to the Rapa Nui of Easter Island are 1,200 miles away. Non-human neighbors? Those may be on the island itself. The Moai statues, one of Easter Island's trademark images, are said to be inhabited by the spirits of the dead island chiefs they represent. Many Rapa Nui report strange feelings, apparitions, even voices speaking the ancient tribal language while in the presence of Moai. On the South Island of New Zealand is said to live a creature straight out of the past. Could one of the largest flightless birds ever to have existed— a species said to have been hunted to extinction 500 years ago by the Maori— be making a comeback? Team Truth heads to the virtually uninhabited 5,000 square mile area of the South Island called the Fiordlands to investigate where recent sightings were reported, and moa bones as well as the remains of nests have been found.

Near Haboro, a coal-mining town on an island in northern Japan, thousands of miners died while working under sub-standard conditions. Some were prisoners of war who were worked to death, while others were buried alive. In the forty years since these mines were closed, nearby residents have reported strange paranormal activity leading them to think the area is haunted. In Tanzania, a mysterious beast is said to be roaming through the flat lands of the Serengeti. Known as the Mngwa ("ming-wah"), this saber-toothed feline is reported to be larger than a lion, measuring a frightening eight feet long and weighing more than four hundred pounds. And, yes, it eats humans.

A Bigfoot-like creature is sought in Vietnam in the Season 5 premiere. (Special 8 pm start time.)

Josh visits Nepal with his crew to investigate the Yeti myth.

Australia — Queensland: The Yowie In the Australian wilderness, a so-far unidentified something creeps around. This creature, the Yowie, resembles the Himalayan Yeti and the North American Bigfoot. Like its overseas mythical cousins, this bizarre hybrid is said to be supremely elusive and a mix of human and ape. But the Yowie is a nocturnal scavenger. Having previously gotten some evidence of Bigfoot, Josh hopes for a similar breakthrough. Malaysia: Mosque Haunting An abandoned mosque in the jungles on the Malaysian peninsula is reported to be home of an evil spirit. Villagers in the region, including a powerful imam, won't even approach the mosque after sundown. Josh and his team travel to Kuala Lumpur to investigate this haunted ruin.

Josh joins a team of paranormal investigators in Thailand's Khon Kaen province to hunt ghosts reported by villagers, and later he hunts for the Phaya Naga, a nāga-like serpent lurking in the Mekong River near the Laos border.

The team heads to the Incan ruins in the mountains of Peru to research claims that they are haunted. Alaskan locals claim their community is being terrorized by a giant, winged bird.

Josh is on the island of Java in search of a bat with a 12-foot wingspan (that's not a vigilante). Then the team heads to the Philippines to hunt down a huge, mysterious river creature.

Josh returns to Papua New Guinea, this time he is in search of a nocturnal, Pterodactyl-like creature called the Ropen. Next, he heads to Chile to find the legendary Chupacabra, a blood-sucking creature with glowing red eyes.

In the mid-season finale, Josh and the team travel to the kingdom of Bhutan, one of the world's most isolated nations. There, they hope to track down the Yeti monster, human in stature and beast-like in behavior. After a laborious trip from Los Angeles the team finally arrives in the land of peace and love. They speak to locals and quickly learn that the Bhutanese believe in the creature so fiercely they've created a Yeti Conservation Center in the southern city of Sakteng. One woman had bones passed on to her as an heirloom, which she believes are skeleton remains from a Yeti. So, Josh takes photographs that will be analyzed when the group returns to the States.

Sixty percent of Americans believe in extra terrestrial life forms and one fourth of the general population thinks that aliens have visited the planet. Spurred by this information and a recent influx of reports made by Chilean locals about aliens, Josh and the team embark upon their first ET investigation. Next, a man made international news with his personal footage of an unidentified animal that appeared to be over 40 feet long, floating in Turkish waters. Locals in the city of Van, a far eastern Turkish location, also claimed to have seen the mysterious beast. The story of the Lake Monster has became such a hot topic of discussion that they've built a statue of the monster and formed their own search teams to look for it. Not wanting to miss out on the excitement, Josh and the crew trek 17 hours to join the mission.

Josh searches for Issie, the Loch Ness monster of Japan, supposed to live in Lake Ikeda then jumps the continent for Iceland in search of little people believed to be elves.

Josh ventures to a Mexican island to investigate a haunting attributed to a drowned girl and the evidence is later analyzed by TAPS members Steve Gonsalves and Dave Tango of Ghost Hunters. Next, he goes in search of the lusca, a giant octopus rumored to lurk the waters off Andros Island in the Bahamas.

Probes in Romania and Belize unfold.

An investigation is held at night of King Tutankhamen's tomb. Next, the team searches the Everglades where the "Swamp Ape" is suppose to lurk.

Josh goes to South Africa and investigates the banks of the Mzintlava River where a horse-headed fish creature called the Mamlambo reportedly lurks. Then, Josh is off to Lesotho in search of the Tokoloshe, an ape-like being with enormous eyes said to appear and vanish like a ghost.

A Mongolian sand worm and haunted ruins in East Africa are investigated.

Ninki Nanka is a legendary creature based in West African folklore. Descriptions of the creature vary, but the consensus is that the animal is reptilian and possibly dragon-like. According to tradition, the Ninki Nanka lives in the swamps of West Africa. Then, meet one of the most terrifying and least-seen forest creatures: the Kikiyaon. Its very name can conjure a look of terror. It is described as resembling a large owl of human proportions. It has a large beak and raking talons on its arms and feet. In many respects it is a mixture of bird and human. The Bambara people say it has a huge pair of feathered wings that grow from its back. Sharp shoulder spurs serve as weapons if its razor-sharp claws fail.

Josh and the team travel to Petra, an ancient city carved from the walls of a canyon in Jordan in search of the spirits who are still said to reside there. Then they return to the US to see if they can find proof of the existence of the Lizard Man who supposedly lives in the Scape Ore Swamp of South Carolina.

Robb Demarest and Dustin Pari help the team search in Peru for a gremlin-like creature. Also, the team plots a course to travel through the Bermuda Triangle.

In Argentina, Josh searches for werewolves, which are of such a concern that the Argentinian president supposedly baptizes the seventh son born in a family to purge the curse. Afterward, Josh checks out reports near the same area, of a dwarf-like creature called El Pombero which is said to impregnate women with a single touch on the belly.