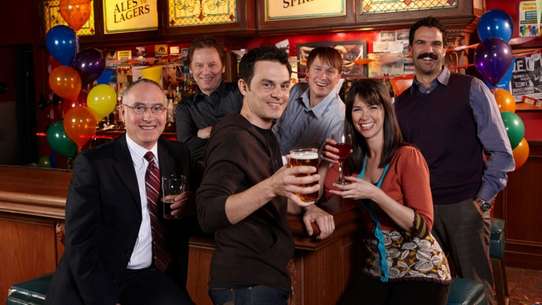 The BEST episodes of Dan For Mayor

Dan Phillips is a 30-something bartender who lives and works in the city of Wessex. His only serious relationship was with Claire Kendal, only now Claire is engaged to someone else. She hasn't broken the news to Dan yet, felling that the news might upset him. When she does, Dan reacts the way most of us would, by telling her that he's running for mayor.

Dan is mentoring a young ``Mayor for the Day.''

Dan announces a fact that throws a monkey wrench into both his and Anita's campaigns.

Claire considers getting involved with Dan, or at least with his campaign, but only if he comes clean about an accident he had with a cat.

While taking part in the candidate’s debate, Dan gets embroiled in a career-ending muffin issue. Jeff is in trouble at his own work.

Dan and Jeff get into a dicey situation with a mascot. Claire makes an investment in her future by focusing on Mike.

Not all is going smoothly for Dan and Jeff in his campaign, and a problem arises that puts them in a moral dilemma.

Because of his past employment relationship with Fern, Dan agrees to speak at a rally but doesn't ask just what the rally is for. He finds out when he gets there that it is a pro-pot rally. Mike is floored by Claire's parent's divorce, and offers to help in any way he can, but discovers that Mrs. Kendall wants the kind of help that he's just not willing to give.

With recycling in mind, Dan tries to revamp the garbage system already in place in Wessex; he makes a deal with a nearby city, but finds that politics is a trickier business than he had been lead to believe.

Claire has a problem and isn't sure who to turn to for help, so she asks Mike... and Dan. Meanwhile Jeff takes over Dan's speaking engagements with some help from an unexpected source.

While Dan and Claire try to sort out their feelings for one another and just which direction their relationship should take, the election campaign continues on, with things going not so well for Dan.

Dan's ratings in the popularity polls take a dive when he tables raising the property tax in Wessex. All the political hubbub puts Dan in the hot seat with a student reporter who goes overboard in letting the denizens of Wessex know about Dan's spelling skills. Mike decides it's time to move upwards and onwards from Claire.

Dan is about to open the annual ``Porktoberfest''; Mike takes his role seriously.

Dan visits his high school workplace; Claire plans to lure businessmen to Wessex; Jeff tells Fern there are tunnels under the bar.

Trying to improve tourism in Wessex, Dan tries to have his city included on the new Art Trail, but finds that there just isn't enough art in Wessex for it to qualify; he tries to fix the situation by having a sculpture commissioned. Fern's Bar gets into the video lottery terminal game, and the customers and employees alike find it addictive. Claire has a line on a new job: doing PR for an anti-gambling campaign, putting her squarely in opposition to the gang at Fern's.

With bike lanes being a point of contention in many cities, Dan decides to open up bike lanes in Wessex, then finds that the issue is one that follows him home when Claire insists that he also allow roller-bladers to use the lanes. Fern forgets to renew the liquor licence for the bar, and decides not to let Jeff know about his little mistake.

The annual Mayors' Conference is being held in Wessex, which puts Dan in the position of hosting mayors from across the province; he finds that the experience is very much like being in high school with cliques and back-stabbing. With Dan away, Claire takes the opportunity to move her belongings out of storage, and asks Mike and Jeff to help her with the lifting and carrying; she doesn't realize that the two men are both trying to make the other look bad.

Dan feels that his campaign needs a central focus, and so searches for a symbol to rally supporters. Claire, with her wedding date approaching, becomes tied up in the small details.

Dan needs some backers for his campaign, and finds one that he thinks will bring in voters from all walks of life. He uses Claire's engagement party as an opportunity to schmooze the potential supporter; Claire's reaction is not at all what he thought it would be.

Dan makes a tough decision and brings Jeff back as his campaign manager, causing Claire see red and change camps, working for Alan Duffy instead.

Dan is unsure if Claire is a liability or not; Mike makes friends with Jeff; Alan tries to keep Claire occupied.

Dan finally gets his apartment to himself when Mike moves out; Claire finds that going back to her old job isn't as easy as she thought it would be.

Dan begins his campaign for mayor, but soon discovers that his friends have reservations about his political aspirations.

With the town of Wessex knowing that Dan didn't really win the election, Dan decides to show his leadership by naming the new arena after a local hockey great, but is dismayed to find that it's already been named for a recently deceased philanthropist. Claire makes the decision to stay in Wessex rather than move to Vancouver, and starts up her own PR company.

With the city budget in mind, Dan cuts the police department's request for 50 Speedoos -- personal mobility devices, and gets himself on the wrong side of the law when the Chief of Police finds out that he won't be getting his new toys. Dan, and everyone he knows, suddenly find themselves the subject of police scrutiny; Dan must turn to Mike and his moustache for help.