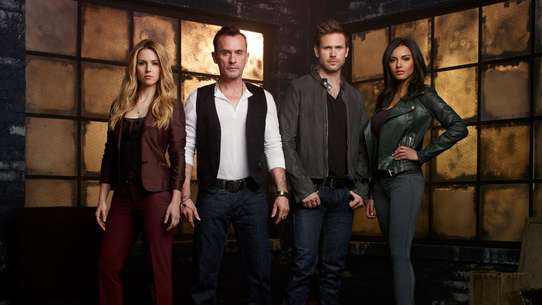 The BEST episodes of Cult

Every episode of Cult ever, ranked from best to worst by thousands of votes from fans of the show. The best episodes of Cult!

After a rash of disappearances and a likely murder, an inquisitive, young female production assistant on a wildly popular television show called Cult joins a journalist blogger in investigating the rabid fans of the series who might be re-creating crimes seen on the program, in real life.

On the set of the television show “Cult,” Skye consoles Edie MacDonald, the actress who plays Meadow, after she confesses to being spooked by a pair of figurines she recognizes from her childhood. Jeff and Skye pay a visit to Edie’s mother. Peter continues to spy on Skye. Meanwhile, on the television show, Billy nears his breaking point.

Jeff receives news that one of Nate’s friends might be planning something at an upcoming “Cult” fan costume party, so Jeff and Skye attend the party dressed as Billy and Kelly. At the party, Skye’s drink is spiked with a hallucinogenic drug similar to a drug used on the television show “Cult.” Sakelik warns Jeff that he might be in over his head. Also, at the party, Roger meets a mysterious stranger named Stuart. Meanwhile, on the television show, Kelly marries Billy in a flashback scene.

E.J. slips Jeff a copy of Sakelik’s police personnel file which reveals that Sakelik was taken into custody by Child Protective Services 25 years ago after being found with other abandoned children at a house in Arrowhead. Jeff and Skye locate the house and question the owner, Annabelle. Sakelik tracks Jeff and Skye to the house and they barely escape with their lives. Stuart continues to befriend Roger. Meanwhile, on the television show, Kelly finds a lock of Meadow’s hair in the trunk of Billy’s car.

Stuart tasks Nate with deciphering the copy of Kellian's manuscript but Cameron remains skeptical that Nate can uncover the answers about the Moon Hill parents. Nate reveals to Stuart that 32 followers disappeared from Moon Hill, and gives Stuart a phone number that he found repeated in the manuscript's code. Jeff and Skye remain in hiding from the True Believers, now that Stuart knows that they know his true identity. Meanwhile, on the inside show, Billy has tracked Henry, the killer of Kelly and Meadow's parents, and holds him captive. Kelly begins to unravel emotionally as she wrestles with unresolved feeling about her parents' murders.

Jeff and Skye learn about a new initiates meeting of the True Believers. Skye plans to infiltrate the meeting with Jeff following close behind. While Skye and her fellow newbie’s are being driven to the meeting location, Jeff unknowingly follows a decoy vehicle. Meanwhile, on the television show, Kelly suspects that Billy’s followers kidnapped Andy.

Jeff and Skye struggle to find evidence against Sakelik to use as leverage to gain information on Nate. Stuart invites Roger to a weekend getaway at his Santa Barbara estate. Skye has lunch with her mother and the two discuss the past. Meanwhile, on the television show, Kelly strikes a deal with Billy to get her sister Meadow back.

Jeff tells Skye about Ama, a woman he met on a “Cult” fan site who claims that her husband is missing after becoming obsessed with the show. When they finally meet her, Jeff notices that she has a “Cult” notebook that looks eerily like Nate’s notebook. Ama introduces Jeff and Skye to a man who finds and deprograms cult members. EJ locates an IP address on a disk that could bring Jeff and Skye one step closer to finding Nate. Meanwhile, on the television show, Kelly finds Professor Patrick, the man who deprogrammed her, at Billy’s compound.

Jeff enlists tech-savvy E.J. to help in his search for his brother Nate. Skye finally reveals to Jeff that she took the researcher job on “Cult” to learn more about Steven Rae. Meanwhile, at the production office, associate producer Peter Grey brushes off Skye’s concerns that some of the “Cult” fans believe there are hidden messages embedded in the show. On the television show, Kelly and Paz discover a body buried vertically, and Kelly believes that this might be a message from Billy.

Jeff finds a surprise visitor in Nate’s apartment who tells him about a dangerous on-campus game that Nate had been hosting known as "Being Billy," which involves role-playing scenes from past "Cult" episodes. Jeff and Skye follow clues that might explain the next scene the players will try to recreate. Meanwhile, E.J. searches Nate’s laptop and finds that he’s been active online and sent a cryptic email to a hidden recipient list. On the television show, Kelly confronts Billy.

Jeff and Skye question Dr. Kimble's teaching assistant, Allegra, and the three discover that Kimble's lab has been ransacked. Allegra identifies Phillip Kellian's manuscript as being almost identical to one of Kimble's. Skye discovers that Stuart opened a production company on the Cult studio lot, so they break into Stuart's offices and discover a surveillance room with hidden camera feeds. On the show, Kelly worries about Andy's growing fear of Meadow. Kelly accompanies Meadow to therapy, and it is revealed that they witnessed their own parents' murder as young girls.

Skye collapses the morning after the “Cult” fan party, suffering a serious reaction to the drug she was slipped. The doctors urge Jeff to locate a sample of the drug so they can find a way to reverse its effects in order to save Skye’s life. Detective Sakelik arrives at the hospital but refuses to help. Jeff suspects that the drug might be hidden at her place so he takes matters into his own hands. Meanwhile, inside Skye’s hallucinogenic state, Billy, Kelly and Skye’s father Quentin encourage Skye to give up and stop searching for the truth.

Investigative journalist Jeff Sefton has learned to laugh off his younger brother Nate's relentless string of obsessions, especially his latest rant that a hit TV show intends to harm him. However, when his brother mysteriously disappears, Jeff takes Nate's paranoia seriously, and in the process uncovers the dark underworld of the TV series "Cult" and its rabid fans, who are obsessed with the show's charismatic cult leader, Billy Grimm. As the show's gruesome plot twists begin to play out in the real world, Jeff enlists the help of a young research assistant Skye in a race to save Nate and unravel the mystery behind the TV series whose hardcore fans would literally kill to see what happens next...

Jeff promises to help Skye keep looking for answers about her missing father. Nate convinces Jeff that they need to see this mystery through to its conclusion. The "Cult" production team prepares to film a live scene that will air online after the show's season finale, but only the actors know how it will end. Meanwhile, on the inside show, Kelly follows a lead on the whereabouts of her parent's killer, Henry and tracks him to hidden catacombs. There, Billy ambushes Kelly, and taunts her to kill Henry.