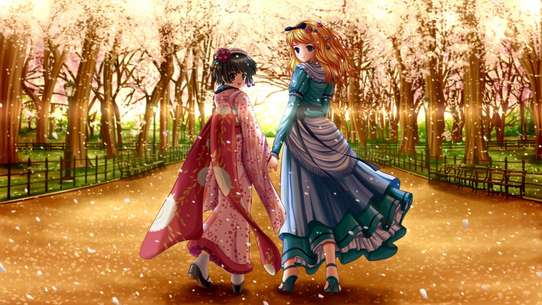 The BEST episodes of Croisée in a Foreign Labyrinth

In the 19th century, a small Japanese girl named Yune arrives at Paris. She has traveled to France with Oscar Claudel to work at his shop, Enseignes du Roy. There she meets his grandson, Claude Claudel, a blacksmith who makes street signs for stores. Caught in a whole new cultural experience, both Yune and Claude learn a lot from each other while they try to keep the shop open despite the declining number of customers at the Galerie du Roy. Once a popular marketplace, many nearby businesses are closing as they are all engulfed by the waves of change.

Yune feels downhearted when she is scorned by Claude for being too friendly towards customers. When a scruffy boy takes advantage of Yune's gullibility and steals a candlestick, she chases after him but loses him. Furthermore, she forgets her way back to the Enseignes du Roy, unable to ask others for help and becoming suspicious towards those who do try to help her. She is eventually found by Claude who takes her back home.

Yune arrives at the Enseignes du Roy after a long trip from Japan with Oscar. Oscar's grandson Claude instantly experiences culture shock upon the presence of a Japonaise in French soil, and after seeing the little girl's attempts to embrace French culture, he begins to accept the Japanese culture as well.

As Claude is having trouble coming up with an idea for a sign for a music shop, he finds inspiration after seeing Yune write out a letter to her sister. Meanwhile, Oscar learns that Yune's kimono had been bought by the upper-class Blanche family, the youngest of which, Alice, showing excitement when she hears rumours about Yune.

Yune hears about a black cat that ran away from one of the stores. Later, Claude yells at Yune when she touches a pair of gloves with belonged to his late father. When Yune hears a bell, she assumes it to be the cat she heard about and goes to search for it, which causes Claude to worry when he can't find her. As Claude gets help from Alice and the other Galerie shopkeepers, he finds Yune up on the roof of the Galerie. After getting her to safety, Claude tells Yune about his father and agrees to take her to the Grand Magasin at some point. Afterwards, Claude returns Yune to the Galerie where everyone is waiting.

In order to learn more about living in France, Yune starts out by embracing French food. Yune clearly struggles from eating cheese and drinking coffee, but Oscar decides to give her much more comfortable food to eat for the meantime. Claude would also take Yune to a walk to the market to learn about food the French usually eat.

Alice visits the Enseignes du Roy to invite Yune to have her photograph taken. Alice follows Yune's advice on putting on a kimono whilst Yune tries on one of Alice's dresses. Whilst getting their photo taken, Yune notices Alice's sister, Camille, feeling downhearted, prompting a reaction when mentioning it to Claude.

Claude scolds Yune for trying to sympaphize with the boy from before. Yune soon ends up collapsing from a fever, leading Claude to feel guilty about what he said to her. He goes to see Alice, who sends for a doctor and gives him a recipe for Japanese porridge. He also helps deliver a flower the boy made for Yune.

As Claude drops Yune off at a tea party with Alice, he is brought to see Camille, who he used to play with in his childhood. After talking about their local fairy tales, Alice shows Yune the nursery she grew up in, where Camille decides to give her a dress that belonged to Alice when she told her a fascinating story.

As Claude goes to see one of his late father's old clients about a commission, Yune finds an old slide projector, which Oscar decides to show off to her and Alice. Yune is reminded of the time she used to make shadow puppets with her sister. Afterwards, after Oscar teaches the girls how to make phenakistoscopes, one of his friends, Alan, helps him put on a public projector show.

Alice invites Yune to come to an exhibition at the Grand Magasin, but Claude is strongly against it for some reason. As a reprise, Claude takes Yune and Oscar to a picnic in the park. After seeing her upset whilst thinking about home, Claude asks Yune to tell him about her sister, Shione. As Shione was often looked at strangly because of her pale blue eyes, Yune, who was weak at the time, made a prayer that she would only be able to look at her. However, as time went on and Yune became stronger, Shione's grew weak and went blind, which Yune blames herself for to this day. However, Oscar assures her that Yune's words made Shione happy.

Alice becomes determined to invite Yune over for tea, but Claude is not so keen on the idea. After Alice keeps pestering them, Yune agrees to go to the Blanche household. Although Alice makes various attempts to get Yune to stay with her, even offering to return her kimono free of charge, Yune declines in order to hold up a promise to make sukiyaki for the Claudels.