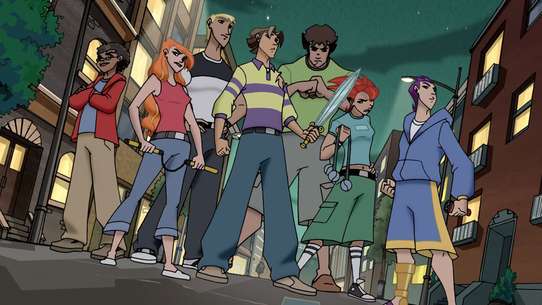 The BEST episodes of Class of the Titans

Imprisoned thousands of years ago by his son ZEUS, CRONUS, the god of time, has found an extra second to escape from the Underworld. Now history is about to repeat itself as CRONUS heads a legion of mythological MONSTERS in his quest to regain control of the world...But there is a PROPHECY......Seven TEENAGERS stand in his way. The unknowing descendants of great mythological HEROES, protected by the OLYMPIAN GODS, and the only ones who can stop this BLAST FROM THE PAST.this BLAST FROM THE PAST.

THERESA, ODIE and ARCHIE arrive to find New Olympia hit with a power blackout. When the heroes investigate they find and defeat the TYPHOEUS- but not before CRONUS sets a diabolical plan in motion! Is this the end of the world, as we know it?

The CYCLOPS that was blinded by Odysseus is understandably bitter after all these years. CRONUS offers the Cyclops his sight so he can exact his revenge upon the heroes- and when Jay and Odie are captured, it's nothing but trouble as far as the eye can see!

After learning about the myth of Perseus, Odie finds the Graes's magical eye at the bottom of a lake, giving the team the ability to find Cronus any time they want. Unfortunately, the Graes want the eye they share back, and are ready to make our heroes experience their worst fears to get it back...

Cronos gets a hold of Theresa's pendant. He now has a key to get into the magical school! As he prepares for his attack, the heroes try and find a way to close the portal and stop him.

The Earth is about to stop turning, but NEIL thinks it still revolves around him- even after Cronus captures him! The gang has to save Neil, the last hero, if they're to fulfill the prophecy and save the world from destruction. Luckily, Neil gives Odie an idea; but is there enough time?

With the powers of the Olympian gods at her command, Theresa defeats Cronus...and now she's after Zeus! It's a battle that rivals any Zeus has faced before and his brute force can't seem to stop her but maybe her friends can.

A mysterious PHANTOM is attacking the gods and draining all their powers. Most be Cronus, right? Wrong. It's Theresa! She's been pushed to far by the gods and now her powers are out of control. She just wants her old life back...but will she lose her mind in the process?

Neil's growing arrogance and good fortune draws out the goddess NEMESIS, who decides that he needs to be taught a lesson. She curses him with the Midas Touch, and now everything he touches turns to gold. Meanwhile, Jay and the others are drawing Cronus into a trap. Just as they are about to capture him, Neil messes it up...big time...by turning his friends into golden statues.

The river god, SCAMANDER, was defeated by Achilles millennia ago. Now he wants to even the score by destroying Archie. Its sink or swim for our water fearing hero, as Archie soon finds himself in very hot water.

Cronus frees King Sisyphus from his punishment in Tartarus and provides him with a metamorphosis ability which will enable him to become any of the heroes so that one of them can take Sisyphus' place. The heroes must help Thanatos recapture Sisyphus.

As the Christmas holiday draws near, Zeus is captured and challenged by Cronus to a chess game. The stakes are high though as Zeus' chess pieces are actually of the seven heroes. The horrible thing is that, if one of the heroes get check mated on the board, they get check mated in real life too! As the heroes race around to find a Cornicopia that grants wishes so they can get Zeus back, Zeus is playing for their lives.

Jay has been feeling the strain of being a leader lately, and he's fighting emotional stress. After flipping out at her when she beats him at chess, Theresa demands to know what's wrong. He tells her about how it's all so hard, and she tells him not to worry, because there are six heroes to watch his back, so he's never alone. She advises him to take a break,and maybe go sailing. But it's her who starts to brood when Odie and Jay make a robot version of Cronus, who can memorize their movements and who's controlled by remote.At least, for a little while. It proves to have a few defaults when he nearly crushes Theresa's hand, so Odie designs some new safeguards. Theresa tells Jay of her worries, but he waves them off, having finally relaxed enough to take her advice and go sailing. But when Odie, Archie, Neil, and Atlanta are heading to the secret wing of the school to install the new safeguards in Cronus 2.0, they realize that their robot has left the training grounds... with Theresa! Now he's using her as bait to pull the heroes into a game, and a deadly one, especially since their only hope to defeat him is to draw out the real Cronus himself...

When Cronus calls upon three dead cyclop relatives to create a weapon of great power that will increase his influence over time, Polyphemus is found wandering around their ancient caves. Yes, that's right, Polyphemus lives, but is blinded and has to wear the Eye of the Storm in his eye socket to help his sight. When Polyphemus discovers Cronus' plan, he sends a message to Odie and the rest of the team but it captured by Cronus soon afterward. Suddenly, it's up to the seven heroes to save their friend and destroy the one weapon that could lead to their defeat.

When Pirithous escapes the underworld to take revenge on Hercules for abandoning him in Hades Chair of Forgetfulness many centuries ago, he plants a tree with poisonous (and attractive)nectar close to the God's secret hideout. The tree attracts the bees that gather honey for the Ambrosia Gods and Goddesses eat. Now, the bees they begin to bring back the tainted honey to the God's garden, and the gods and goddesses are suddenly acting strange; almost like they're at their forgetful 90's. Now it's all up to the seven heroes to stop Pirithous and, now, Hercules!

After Neil pranks Odie, Odie, in a fury, leaves town to gather his thoughts. On a lonely country road, he gets gas at a very antique looking station run by a peculiar old man. This is only part of the mystery. After going on a ways, he ends up in Gizaville, where a party has started. He joins, feeling the bliss of being surrounded by many pretty girls. But then he meets Josephine X, and after flirting, realizes she may not just be a pretty face. Under that heart-stopping exterior is the Sphinx, and she won't let him leave until he solves her riddle. With the help of Valerie, a girl he met at the party, and his friends, who have come to rescue him, Odie eventually is able to figure out the Sphinx's riddle. The town is free, and the heroes have saved the day once again.

With the help of Morpheus,the god of dreams, Theresa creates and sends a vision to Cronus; a valuable part of Jay's plan to lock Cronus away forever. But Cronus learns the truth about vision and unleashes the Oneiroi, black winged demons. The creatures put Theresa in a terrorizing dream. Will she be able to wake up and save her friends when the tables turn on them?

Persephone has gone missing, and as a result, the entire world (and underworld) is experiencing a sudden second winter. Atlanta and Neil try to track down Demeter, Persephone's mother, to convince her to warm the earth up again, while the rest of the team goes to the Underworld to try and find Persephone.

#18 - Nothing to Fear But Fear Itself

After looking into the mask of Phobus, Archie becomes scared of everything. Meanwhile Cronus frees Lykon, a werewolf.

The Tree of Immortality is dying...and all the gods are dying with it! Atlanta (accompanied by a very jealous Archie) tracks down Pan to see if he can help.

#20 - Time Enough for Everything

Cronus is looking for the Tablet of Prometheus, and the seven heroes search several temples in a race to beat him to it. However, Odie is starting to feel unappreciated, so he uses the Timepiece of Zeus to impress his teammates-but by doing so, he also unintentionally tells Cronus exactly where he is...

When the 7 heroes are on a trip to the Elysian Fields to meet their ancestors and learn more about them, Cronus devises a plan to swipe their memories. Problem for him is that the plan backfires when he and the heroes but Neil lose their memories. Now it's up to Neil to get the poppies to heal his friends before he loses them forever!

Cronus brings the constellation Orion down from the heavens to track down the team, and we learn all about the great hunter's history with Artemis... Meanwhile, Neil is being profiled for a TV show, but the camera girl is determined to find out more than she should about where he and his friends keep going.

It seems as though our heroes have finally defeated Cronus for good...but have they? After Thanatos, the god of death, kidnaps Archie, the rest of the team starts to think that not all has gone according to plan...

Cronus steals control of the wind from Aeolus, the King of the Winds, and causes a storm that shipwrecks Odie, Neil and Jay. Odie is rescued by Calypso, the nymph who loved his ancestor Odysseus and sees him as a replacement to stay with her forever. Meanwhile, the rest of the group heads out to sea on a rescue mission, where they're caught in another storm and attacked by the sea monster known as Scylla. It's up to Odie to convince Calypso to let him go and save his friends and return Aeolus' powers to their rightful owner.

CRONUS sends Herry back in time to perform the LABOURS OF HERCULES. A LION, a HYDRA, a DRAGON- oh my! Jay and the others try to save Herry, but first they have to face the music of the seductive SIRENS!