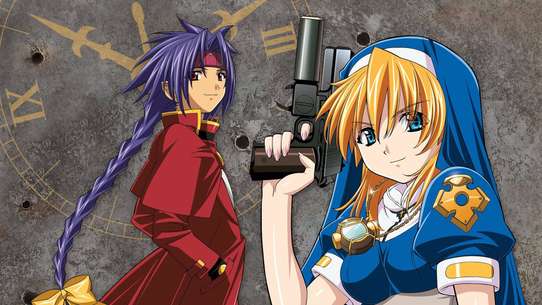 The BEST episodes of Chrono Crusade

World War I revealed some of the deepest horrors of humanity, but the years following it would reveal horrors of another kind. In the 1920’s, monstrous demons began appearing in surprisingly high numbers across America, manifesting as sin incarnate. To combat this menace, a holy organization known as the Order of Magdalene established branches across the country, all governed by the Council of the Catholic Church. The New York branch is home to the young and reckless Sister Rosette Christopher and her demon hunting partner, Chrno. Armed to the teeth with holy guns and bullets, the two are renowned for accomplishing their job, but also causing extensive property damage at the same time. This doesn’t exactly please the head of their branch, Sister Kate Valentine, though Rosette is still greatly appreciated by the branch’s minister, Father Ewan Remington, and their weapon developer, Edward Hamilton. Chrno, however, leaves them with a sense of unease; there’s more to him than there appears to be, and even more behind the bond that he and Rosette share. Placing their lives in each other’s hands, the two of them must continue to fight off the increasingly mounting demonic menace, discover its source, and hopefully complete Rosette’s own personal mission of finding her missing brother, Joshua.

Aion appears in front of joshua and gives him Chrono's horns. Later Joshua start to stop time, making all stones. Rossette is unable to do anything but she decides to make a pact with Chrono so she could save Joshua.

Rosette, Chrono and Azmaria are on a train headed to San Francisco, where they believe Joshua is. While on the train, Rosette sees a photo of Joshua in a bag of treats that someone gives her. But this leads her to fall into a trap set by the Sinner Rizel.

Rosette is happy and in high spirits, because she was called to go and pick up Minister Remington from Grand Central Station. But it's all a trap laid by the Sinner Rizel, who is aiming for Rosette. Rizel, who has received orders from Aion, skillfully manipulates the words of innocent people and tries to take Rosette away. Rosette hears that Joshua is in pain, leaves Minister Remington behind, and heads for the train...

Rosette takes Chrono and Azmaria to the Seventh Bell orphanage. While at the orphanage Rosette explains how she and her brother Joshua met Chrono four years ago and the events that followed.

Its Christmas time at the Magdalene Order and everyone is preparing. This will be the first time Azmaria can have a nice Christmas, so she wants to find the perfect gift for Rosette. Meanwhile, Rosette finds more clues to Joshua’s whereabouts.

Duke Duffau, a man who is also after Aion, shows up at Satella's door. He asks for Rosette and the others to ally with him. The Magdalene Order is unsure what do to about him and leave the decision up to Rosette.

Rosette finally meets Joshua but he doesn't remember her. Aion already has the 12 apostles and is going to accomplish his dream. Rosette is revealed to be an apostle too, a reincarnation of Mary of Magdalene. And Fiore is the missing sister of Satella.

All are stressed, Azmaria, seeing everyone suffering decides to take Chrono, Rosette and Satella to a festival. At first they didn't like the idea but then they start to have fun. Rosette and Chrono are alone and see the sky, then they kiss each other. Afterward Rosette sees Aion's bird and starts to run toward it. Rosette sees Joshua...

Rosette's first mission as a Militia is to recover a corpse being smuggled by the Mafia, who desire power. Rosette, who brought Azmaria (now an apprentice exorcist) to where the smuggling is taking place, meets Satelle the Jewel Witch. Rosette goes along with Satella in order to follow the corpse released by the smugglers, but Satella, who harbors a strong hatred for devils, discovers Chrno's true identity and sees him as an enemy.

The Pursuers (Duke Duffau's group) and the Magdalene Order battle the Sinners Genai and Vido.

While still frozen in place, Chrono remembers his past when he still worked with Aion. He remembers the first women he loved, Mary Magdalene, and her prediction of her own death by Chrono's hands.

Chrono and Joshua battle in the sky over San Francisco, causing damage to the city below. Meanwhile, the battles with Aion's Sinners continue. Although everything is in vain because Aion captures Rosette and makes his escape.

The red moon appears, the statue of Mary cries tears of blood, and as the disasters prophesized in the Bible occur, the seal on the land that is connected to Pandemonium is undone. In order to reseal the area, the Magdalene Order is dispacted to Central Park where the dead have returned and miasma is scattered all about. But Rosette and Chrno's old enemy, Aion, reveals himself. Aion, who desires the power of the Apostles, is aiming for Azmaria and reaches out his devil's hand...

Viscount Lerajie finds a way to snatch Azmaria from the protective custody of the Magdalene Order, and Chrono is severely wounded in the process. To get Azmaria back, Rosette is prepared to undo the seal that binds Chrono, but to do that would cause great harm and tragedy to herself. Meanwhile, up inside an airship, Ricardo is trying to obtain a new life by harnessing Azmaria’s powers. But Lerajie double-crosses Ricardo, and makes the power that flows in from the Astral Line his own.

Rosette and the Magdalene Order start to work together with Daffau and his friends. Meanwhile; Satella, who disagrees with Rosette's decision to work with devils, starts to do some exploring and investigating of her own. She ends up being captured by a follower of Aion in an abandoned mine. As Aion appears before her, what will she do?

Rosette and Chrono receive orders to take Azmaria, one of the Apostles spoken of in the Prophecy of Fatima, into protective custody. For this mission, they must infiltrate a hotel managed by the tycoon and devil worshippers Ricardo. Rosette and Chrono try to get Azmaria out but are attacked by the Viscount Lerajie, who knows something of Chrono’s past. When innocent people get hurt in the fight, Azmaria thinks it is all her fault. Her horrified feelings of regret, however, activate a hidden power, and the people’s wounds are miraculously healed.

Chrono receives a letter telling him to meet Rosette in an abandoned church. When he arrives, he is surprised to learn of Rosette's desire to cancel their contract. Later, after letting Aion get away once, Chrono prepares for their final battle.

After the escapade on the train Rosette and the others arrive in San Francisco. After Chrono passes out from a fever, Rosette ends up running all around the city looking for a remedy to cure a fever and work on a devil.

Under the control of Aion, Rosette has been using the power of miracles to heal the sick and wounded. Meanwhile, Fiore escapes from the Madgelene Order with Joshua. Satella finds her on the streets. Will she have to fight her older sister?

A big black dog-like beast is attacking, and killing, members of the mafia in New York. But there are problems when the Rosette and Magdalene Order try it defeat this beast; it seems to have no physical body and can run much faster than any car. Can Rosette defeat it using a new machine Elder invented?

Things are starting to get back to normal at the Seventh Bell Orphange after everyone has become unfrozen. Meanwhile, Azmaria and everyone at the Magdalene Order are still searching for the missing Rosette and Chrono, who have decided to stay hidden so they can spend some time together before Rosette's life runs out.

Elder, a mad scientist, is responsible for the equipment the soldiers of the Magdalene Order use. And he has just invented his latest masterpiece, the "Spirit:" a bullet that, as the devil sealed inside of it begins to materialize, transforms the released spiritual energy into a powerful destructive force. Rosette, who is entrusted with the Spirit, loads it into her gun during a mission--and then promptly loses both gun and bullet! Rosette and her friends scramble to find the Spirit before Sister Kate discovers it's missing, but it's already too late: the bullet has fallen into the hands of a devil...

Sister Rosette, an exorcist for the Magdalene Order, is dispatched late one night to exterminate a troublesome devil. But things get a little out of hand, and she ends up destroying a building! So the following day, as always, she has to write a letter of apology. Sister Kate uses this incident to suggest Rosette’s partner, Chrono, might be the problem. But Rosette quickly blows this idea away as so much hot air. Rosette and Chrono then get ordered to the New York harbor, and this time they have to play hide-and-seek with a monster that’s stowed away in a freighter’s cargo!

Rosette, who has been prohibited from searching for Joshua by Sister Kate, goes with Minister Remington's suggestion and takes the test to become a Militia, who have the right to do independent investigations. Remington secretly releases a devil for the test, but Azmaria is also in the testing area! Rosette will be attempting a dive in order to save Azmaria, whose body has been taken over by the fiendish mind eater, but will she be able to save Azmaria's heart?!