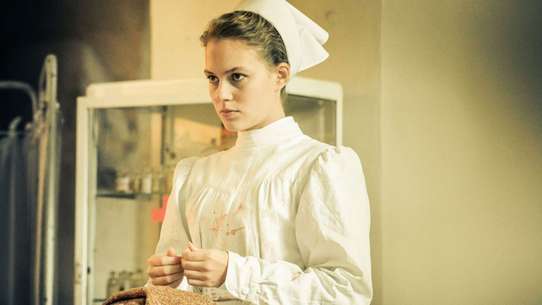 The BEST episodes of Charité

Every episode of Charité ever, ranked from best to worst by thousands of votes from fans of the show. The best episodes of Charité!

The series describes the accomplishments of several famous German physicians and scientists at the prestigious Charité hospital in Berlin towards the end of the 19th century.

As German defeat becomes inevitable, the Charité staff struggle to treat patients without supplies and await the Russians' arrival with mixed feelings.

Nurse Christel presses Otto for an engagement. Artur makes arrangements for Karin behind Anni's back. A coup attempt has consequences for Sauerbruch.

Koch fails in one aspect of his life, but succeeds in another. Ehrlich faces a betrayal and increasing anti-Semitism. Ida rethinks her future plans.

Nurse Therese falls ill. Koch tests tuberculin on humans, starting with himself. Behring reaches a breakthrough in his work on a diphtheria cure.

Pathologist Virchow tries to uphold his liberal values in a time of upcoming nationalism. Doctor Koch continues his work on battling the rampant tuberculosis. Von Behring tries, in vain at first, to join his lab while Jewish Doctor Ehrlich is welcomed for his work on colorizing cells. Ms. Lenze recovers after an appendicitis but has to work off the fees for her treatment by working as a nurse.

Anni and Artur secretly treat Karin. A colleague begs Sauerbruch to rescue his ill son-in-law from jail. Martin tells Otto why he reports to the police.

In 1943, a medical student seeks to use a soldier's case for her psychiatry dissertation, while her brother tries to prevent the man's court-martial.

Spinola repays Behring for saving a life. Ida is urged to pursue an ambitious dream. Koch receives two visitors: a Tokyo doctor and the new emperor.

Koch reveals big news at the congress while Ehrlich struggles to find a doctor to deliver his wife's breech baby. Tischendorf and Ida's romance blooms.