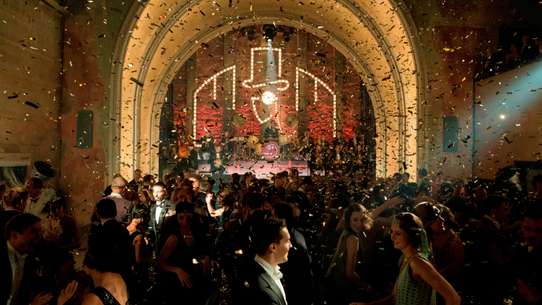 The BEST episodes of Babylon Berlin

Beneath the decadence of 1929 Berlin, lies an underworld city of sin. Police investigator Gareon Rath has been transferred from Cologne to the epicenter of political and social changes in the Golden Twenties.

The SA face the SS at 'Stennes Putsch' as Toni meets an ally and Goldstein boards a Zeppelin heading for America.

While Malu Seegers and Dr Völcker pursue a deadly plan, Charlotte makes a terrible discovery and Helga tries to escape from her kidnappers.

The gripping noir reaches a climax as Rath faces a stand-off for train carriage TY 23-05, and the truth behind the Sorokin's gold is revealed.

Despite Gennat's doubts, Rath organises a meeting with all of the wrestling club bosses. Malu rethinks her plan and Esther looks for work as a musician.

Litten remembers a legal loophole that could save Greta's life. Charlotte visits the inn mentioned in her mother's love letters. Wall Street crashes.

Rath and Lotte race to stop the train robbery in time, while Greta's conscience is torn when she falls into an assassination plot.

Benda's widow gives Wendt a piece of evidence. A crisis bonds Helga and Nyssen. Fingerprints are found on the knife, but Charlotte notices an oddity.

Weintraub investigates the boxing match betting fraud. Rath makes a confession to Charlotte, who asks him to find out more about Benni's death.

Rath is celebrated as Charlotte meets a boxer. Stennes plots a coup against Hitler while Goldstein learns the truth about the diamond.

A dead man in the Tiergarten occupies the homicide squad - Rath believes the case is connected to the wrestling clubs. Toni gets caught and Charlotte makes a wrong decision.

Rath takes part in a risky experiment, a brutal gang war breaks out in Berlin, Widow Behnke tries to help Katelbach and Toni finds herself in danger.

Rath picks up Richard for a lineup. Ullrich finds a hair in a locket Tilly wore. Nyssen presents a proposal to Gen. Seegers. The Phantom strikes again.

Abraham Goldstein arrives in Berlin as secret organisation the 'White Hand' passes a verdict on a criminal and Rath investigates a boxing match.

New Year's Eve 1930/​31: While a marauding SA squad is marching through the city, Charlotte is called to a crime scene. Nyssen gives a big party with Helga and makes an announcement.

As Widow Behnke kicks off her high stakes rescue plan, Stennes instigates a hall battle in the 'Moka Efti' and Charlotte makes a secret observation.

Gereon is reunited with Helga, but his joy is short lived. With her mother dead, Lotte's situation at home worsens.

Nyssen finds a way to get his mother's money. Rath learns who Helga's benefactor is. Marie-Luise Seegers approaches Katelbach's landlady with an offer.

Nazis storm Tempo's office in search of Katelbach. The name list leads Rath to identify the men behind Benda's murder. Charlotte catches Vera in a lie.

Lotte is kidnapped and held in an ominously familiar location, while Rath and Benda's case against the Black Reichswehr stalls.

Rath brings Moritz to the castle. Charlotte tells a lawyer about the deaths among street children. Goldstein takes drastic measures.

Rath hits an unexpected snag while investigating the Benda case, and later tracks down the movie set gaffer. Charlotte is visited by her older sister.