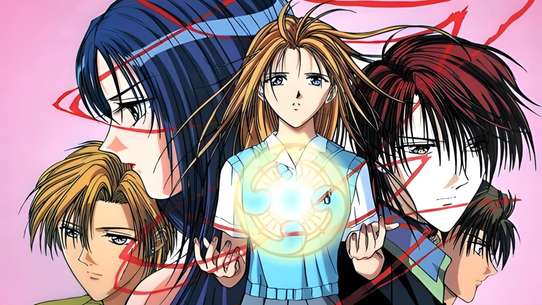 Ceres: Celestial Legend, or Ayashi No Ceres in Japan, is a series surrounding the teenage twins Aya and Aki Mikage. On their sixteenth birthday, the two are invited to their grandfather's home for what appears to be a party. When they arrive, a test brings out something in Aya that frightens her and threatens the existance of the Mikage clan. This series depicts the events that occur when this being begins her search for what rightfully belongs to her, her Hagoromo. The Episode Guide contains many spoilers. This show has never been aired in the United States.

Aya and Yuhi try to return to a normal life at school. Things turn out not to be so quiet after they meet another descendent of Ceres.

Yuhi begins to face the demons of his past when his father and older half-brother come for a visit.

Yuhi begins to face the demons of his past when his father and older half-brother come for a visit.

The group meets a little girl named Chidori. She knows Aya's identity as Ceres and Chidori wants her to help her hospitalized, little brother Shouta by taking him flying.

Several things happen at once as the entire hospital goes haywire. The effects of Kagami's C-project on the patients has violent and deadly consequences.

Aki finds himself slowly changing into someone he doesn't like. He finds his new sexual attraction to Aya revolting. Aya notices that her silver cross choker has disappeared, not realizing Ceres gave it to Toya. Toya and Aki make the decision to run away, even if Toya will never get his memories back. However, when Aya waits hour by hour on the bridge where these three first met, she begins to wonder, will they ever be reunited?

Aki is introduced to the Mikagi's secret "treasure". However, this secret will have an unintended consequence for Aki's grandfather.

The Progenitor, the man who trapped Ceres on earth, has returned--in the body of another person. Turns out, he could use a personality transplant. The Progenitor goes looking for Ceres, who he considers to be "his woman".

In the morning Yuhi comes and gets Aya and they follow Toya without him knowing. After following Toya into a building Aya gets separated from the rest. She sees her cousin, Kagami, and he forces her to turn into Ceres. While Ceres Kagami drugs her and takes some of her blood. Yuhi shows up and Ceres jumps out of a window with Yuhi. Aki decides to do everything they want as long as they don't hurt Aya.

Ceres introduces herself and says that Aya and herself are the same person and wants to kill all the Mikages. She also plans on killing Toya (who just showed up), because he works for the Mikages. Ceres starts attacking and Yuhi tries to protect Aya's mom. Yuhi doesn't know who to do, so he kisses Ceres and......She transforms BACK into AYA. Aya slaps Yuhi, while Yuhi tries to explain that nothing was going on. Aya sees Toya standing by the doorway and then her mom. Her mom is in coma. Feeling confused Aya asks Yuhi what happened and says she doesn't remember a thing. While Yuhi is walking away he sees Toya outside he tells him that he protects Aya and that Toya better stay away from her. Back at the Mikage mansion Aki wanders downstairs and hears grandpa saying that he wants Aya killed without Aki knowing. Aki decides to search for Aya, because shes the only thing he that he has left and he needs her just as much as she needs her. While searching for her he gets cornered by

Toya beats up the thugs cornering Aki and takes him to where Aya is. Meanwhile Aya and Yuhi are talking and you learn why Yuhi stays at Suzumi's. They fall asleep and Aya wakes up. She goes into Yuhi's room, grabs a book titled, Folklore of Ancient Japan, and goes outside to read it. After reading a legend about a Tennayo, you see Aki. Aya and Aki are finally REUNITED! Although things go astray when Aya turns into Ceres, who tries to kill Aki, and then Aki has to go back to the Mikages. After Aya transforms back she follows after Aki and Toya. She talks with Toya and stays at his apartment.

At the Aogiri's house the head of the house, Suzumi, Yuhi's sister in law, tells Aya that she is a celestial maiden. Suzumi tells her that Mikage have killed many girls like her and that she should stay at the Aogiri's house. Suzumi also gives Yuhi a head band called obey the heavenly maiden band that only a celestial maiden can take off. Aya decides to take off so she leaves a note then heads off to home. At home she accidentally falls asleep on the couch and washes her face. While washing her face she has a vision and she sees the hospital that Aki is at dripping with blood down. At the hospital she sees her mom. Her mom asks her why Aya killed her dad and then she goes CrAzY and tries to KILL Aya. Aya gets stabbed in the hand and transforms into Ceres.

It was the day before Aya and Aki Mikage's 16th birthday. They had some fun at karaoke, only the word of a fortune teller who foretold trouble coming there way. Suddenly a woman was robbed and Aya tried to help her. While trying to save the woman's purse, she fell off the bridge. Images to her and she floated safely to the ground. She landed on the highway and was rescued by a HOTT guy (named Toya). Aki and Aya were told to come straight home from school, even though they had other plans with their friends on their birthday. When they arrived at their Grandfather's mansion all of their relatives were already there. Confused about what was going on, they received their present. As Aki opened it the same images as before to her and she started to shiver. In the package was a mummified hand. Aya transformed into another woman and the hand was destroyed. At the same time Aki's body had cuts appear and he collapsed. Aya went to help her brother, but was stopped. They told he

Aya was so confused what had happened to Aki and she burst into tears. Suddenly, her father had come and drew a gun to shot her. When her father reversed side ways, her grandfather shot her father and then Everything burst into Flame and CERES did come out. After which, AYa escaped from the mansion and went up in a tree.. She was crying for it was just yesterday that she and Aki are having fun.. Then a man (SO CUUUUUTTTEEE) called her.. It was then Aya realized that he was the same man who had rescued her from the fall yesterday. He was TOOYA.. Aya keeps on asking him what is really happening and was about to cry hard aloud when suddenle TOOYA kissed her.. She was so shoked at first and the kiss ended she realized that it was her first real kiss.. heheheh Aya told Toya that he was her LIFESAVER. TOOYA ignore this nonsense and told AYA that she must leave the house of Mikage. TOOYA then had gone.. When AYA had come down the tree.. A man hurled her to run.. He was YUUHI and then she went

Miori has a secret of her own, and in her Ceres form, goes after Aya out of revenge. Meanwhile, Aki, informs Toya that he has been brainwashed by Kagami Mikage.

The Progenitor captures Aya and the Mikage try to erase her memories. Meanwhile, Wei goes after Toya, trying to capture him.

Toya must decide what is more important to him, Aya, or his search for his lost memories, which proves to be more dangerous than he expects. Meanwhile, "Aki" continues his hunt for Ceres.

The Mikage capture Chidori and her brother. Kagame plans to use Chidore's C-Genome powers to restore the Hagoromo, Cere's Celestial Robe. Toya and Yuhi attempt to rescue the pair. Aya finds out why she has been feeling so ill.

Dr. Kurozuka told Aya that he will lecture Toya on how to be a good father/husband then Aya left to go to Mikage's place to look for Toya. On the other hand, Kagami was conversing with a woman about their plans after their postponed wedding. The woman asked Kagami if he prefers a girl or a boy as their children but Kagami said that he doesn't need to have his own child. Next, Kagami is sitting on an armchair only in robe beside a bed with a sleeping half-naked woman. He was watching tv and remembering the past when someone called him to say that Aya is waiting so he go there. Aya asked where is Toya but Kagami told her that he's dead and will give her Toya's keepsake later then they entered a room filled with busy scientists. A monitor showed a picture of the ovum that they got from Chidori Kuruma mixed with sperm from the chosen ones there. He also told Aya that half of the C genomers there are pregnant too, some were still virgins but all agreed to do ""that"". Aya said that she loved

We learn Ceres' true history with the Progenitor, the original Mikage, who trapped Ceres on Earth.

Yuhi and Mrs. Q are worried about Aya and Suzumi and she suggests they all go see a young singer named Shuro. He too is a descendent of Ceres, and he has a grudge against the Mikage after they inadvertently killed his singing partner, best friend, and fellow descendent, Kei. He is also harboring other secrets about himself, and has a plan to do major damage to the company that ruined both his and Kei's life. Aya finds out from Kagami about Shuro, and soon realizes the singer's plan. She also knows, like Shuro, that it will cost him his life. How can she take another death on her hands? Especially without either her husband or friends to support her?

Toya myteriously returns with his memories restored. He tells Aya that he knows what happened to Ceres mana. Meanwhile, the original Mikage returns again, and he has a surprise in store for Aya. Will Toya be able to protect her, this time?

Ceres and her mana are reunited despite Aya's protest about the price Toya will pay for this. Ceres has a plan for the Progenitor, the first Mikage. Will Aya get in the way of Cere's plan? Will Kagami and his empire pay a price for the restoration of Ceres, as was feared?