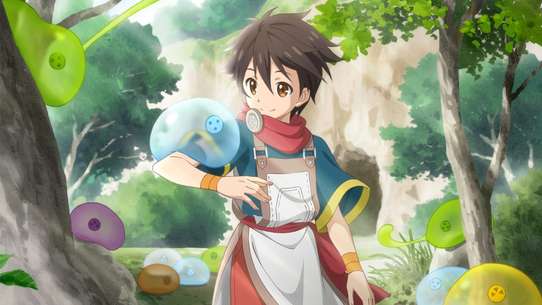 The BEST episodes of By the Grace of the Gods

When 39-year-old Takebayashi Ryoma dies from blood loss (after sneezing and hitting his head on the ground), he is reincarnated as an 8-year-old boy in a fantasy world. Not the greatest way to bite the dust, but at least he reincarnates! Set on this path by three major gods, Ryoma begins to live a life of solitude in the forest, studying slimes. But if you’re a fan of isekai…you know life for him won’t be that simple.

#1 - The New Coworkers, with the Slimes

The laundry business explodes in popularity, so Ryoma rushes out on day two to hire more help. He meets Fei and Li Ling, foreigners with a hidden past.

With the business going more smoothly than Ryoma ever imagined, Ryoma is able to go back to studying his slimes and adventuring. He discovers several new types of slimes.

#3 - First Time in Town, with the Slimes

Ryoma and the Jamil family travel to Gimul, a mining town. There, Ryoma and Eliaria take the first steps in becoming professionals in their crafts. Ryoma is given another opportunity to flex his new powers.

Ryoma arrives at Miya's house, overflowing with trash from a nearby dump. Ryoma and his slimes show a remarkable ability to clean, a skill that, as it turns out, the town of Gimul desperately needs.

#5 - Laundry Business, with the Slimes

The laundry business is ready to open. Ryoma hires new employees to help get his business started, and throws a party to express his thanks to the friends who have supported him thus far.

#6 - The Beginning of a New Era, with the Slimes

Ryoma and Eliaria make another attempt to tame the limour birds. If they succeed, it would be a great milestone in their careers as monster tamers. However, whatever the outcome, their separation is inevitable as Eliaria leaves for school.

#7 - Monster Hunting, with the Slimes

The Adventurer's Guild sets up a large-scale group of adventurers to deal with the massive monster infestation discovered in the abandoned mines. Ryoma joins them.

#8 - Taming Training, with the Slimes

The Jamil ducal family are all experts in the art of monster taming magic. Ryoma and Eliaria receive the Jamil elders' tutelage to further hone their taming magic.

Ryoma Takebayashi is a young boy living by himself in a forest, who, in a previous lifetime, used to be a tortured middle-aged Japanese office worker. He meets a group of distressed travelers in the forest, and decides to save them.

#10 - The Lady's Training Session, with the Slimes

Eliaria and Ryoma practice magic and combat in Gimul. They practice fighting against the weak but numerous monsters now infesting the abandoned mine shafts.

It turns out that the travelers Ryoma saved were the local duke and his family. Impressed by Ryoma's various skills and enamored by his personality, they offer to take Ryoma along on their journey.

#12 - Starting the Business, with the Slimes

Ryoma decides to strike out on his own as an adventurer and business owner. He discusses his plans with the ducal family, and works with Serge the merchant to put his business plans in motion.