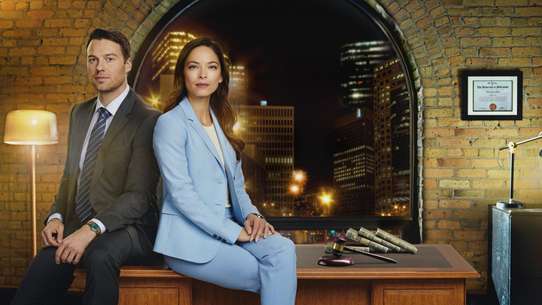 The BEST episodes of Burden of Truth

A mysterious illness targets high school girls and brings lawyer Joanna Hanley back to her hometown. In a town that's as familiar as it is foreign, Joanna seeks to convince the locals that her family's hurried departure when she was a teenager wasn't her doing. She is drawn into the shadowy world of hackers, political movements, and activists. When Joanna becomes the target, someone from her past shows up to try and alter the course of the events.

As Luna's trial starts, Joanna and Billy defend against an avalanche of evidence. With things not looking good, Joanna risks everything by putting an unexpected witness on the stand.

Using the law to her advantage, Joanna herself reinstated on a technicality and plays her trump card. When it isn’t enough to elicit a settlement offer, Joanna makes things personal. She blackmails her father with incriminating evidence and threatens to expose him if he refuses to negotiate. Once she strong-arms him into a settlement, she must choose whether to expose his dirty little secret or not, but doing so may cost her more than she’s prepared to pay.

#3 - Shelter from the Storm

Joanna and Billy head to trial against ClearDawn labs while still desperately searching for a way to expose the fraudulent science used to wrongfully apprehend children.

New leads bring Joanna and Billy to make the horrific discovery of a massive dumpsite on farmland near the school. Joanna's father takes over as lead counsel and it becomes clear that they're running out of time.

Anger over the claim against the mill pits the sick girls and their families against employees of the mill who worry that their jobs are on the line. When the local Pastor’s daughter becomes afflicted with the illness, he blames the girls themselves. Parents begin keeping their healthy kids home from school, so to quell the mounting hysteria, the High School Principal cracks down on the affected girls and prevents them from attending their prom. Joanna fires back at the school, but victory eludes her. When the kids decide to throw a prom of their own, Billy and Joanna are made honorary prom king and queen. However, the moment is over-shadowed by the mill’s answer to her claim – they’ve hired her father’s law firm to represent them and they plan to annihilate her.

Joanna becomes the target of a mysterious criminal investigation. Luna rushes back to Millwood to aid her sister. Beckbie helps Kip deal with a personal problem. Taylor makes a shocking discovery as she continues her investigation.

On the eve of Luna's trial, Joanna reaches out to an old client when she discovers a new piece of evidence that will lead her to the identity of the real killer. Billy attempts to get help for Shane but is forced to make an agonizing choice.

Stuck in Millwood without a case and no firm to return to, Joanna is at loose ends on what to do next until a whistleblower comes forward.

With the return of her client's missing daughter, Joanna sees an opportunity to restart the case against the mine, but as she and Billy investigate further, it's clear nothing about the Oro North mine is as it seems; Luna and Stevie's promise to provide legal help to Dee leads her to a surprising potential defendant.

#10 - Spirits in the Material World

Joanna and Billy are blindsided when their injunction against the mine is overturned. Luna tries to find a legal avenue to help a victim of trafficking. The Millwood Police raid a safehouse where Taylor makes an important discovery.

Joanna begins to chart a new path for the future. Billy gets some unexpected help in his pursuit of a new client. Dee's legal case is at a dead end. Luna is unsure where to turn.

With Millwood divided over a proposed mining project, lawyer and new mother Joanna Chang takes on the case of a landowner whose farm is standing in the way of the mine.

A fish out of water in a town that's as foreign as it is familiar, Joanna battles with questions over her family's hasty departure when she was a teenager and attempts to convince the locals that she has in fact switched sides.

Coming off the loss of class certification, Joanna and Billy decide to go after ClearDawn alone with an unreliable whistleblower as their only lead. Luna goes to extreme lengths to save another child from a wrongful apprehension.

Joanna and Billy are convinced that the local steel mill and its owner Ben Matheson are responsible for the barrels. A shocking revelation in Joanna's personal life leads her to question everything her father had told her.

When it's suspected that her big-pharma client's vaccine has caused a mysterious illness affecting a handful of teenaged girls, high-powered attorney Joanna Hanley returns to her hometown to quickly and quietly settle the case.

As threats against Joanna and Billy escalate, Joanna digs her heels in on the case. Relying on the expert testimony of a respected neuropsychologist, Joanna expects he'll prove once and for all that the girls have been poisoned.

Joanna uses her esteem as partner at CTS to convince a hydrologist to test Millwood's soil. With reluctant permission from the mayor, Joanna and Billy narrow their list of suspects to a handful of industrial sites in the community.

Joanna races to find evidence to dismiss the charges against her before her end-of-day hearing. Her relentless pursuit of evidence will lead into conflict with her legal team. Billy's searches for a lead in the case against the mine.

With Joanna disqualified and the clock running out on Billy who’ll have to face Joanna’s father alone, Joanna must think outside the box if they want to win this. She must face the one person who may be able to help her defeat her father, her mom. Not only does she learn the truth about her father, she gains the critical piece of evidence that ties the mill and their parent company to the dumping. Regrettably, Joanna returns too late and finds the case in shambles, her named plaintiff removed and the class de-certified.

Kodie snatches her kids and goes on the run. With Millwood Police looking for her and with the imminent threat of a province-wide Amber Alert, Joanna must track Kodie down to have any chance at saving her custody case.

With more potential cases of wrongful child apprehensions, Joanna and Billy investigate Millwood Family Services and discover a potential error in the custody hearing evidence that will change everything in the case and in their lives.

Back in Millwood after learning of a death of someone close to her, Joanna doesn't get a moment to mourn as the overzealous police are already zeroing in on Gerrilynn Spence. Joanna and Billy team up to halt a rush to judgment.

After losing at the custody hearing, Joanna is desperate to help Kodie and recklessly launches an emergency challenge to the court-appointed custodian. The case brings Billy face to face with the last person he wanted to see.

Sleepless and suppressing her grief, Joanna tries to maintain her job at Steadman Lavery while preparing for jury selection in Luna's trial. Billy uncovers evidence from Shane that may provide an alternate theory about the murder.