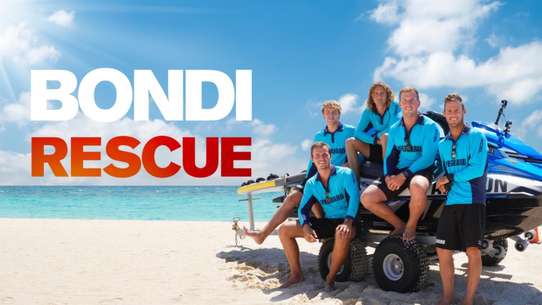 The BEST episodes of Bondi Rescue

Bondi Rescue follows the work of the elite professional Lifeguards who patrol Australia’s busiest beach. This is Australia’s real life Baywatch! Taking the viewers on their journey through mass rescues, drownings, resuscitations, shark sightings, and all number of the weird and wonderful experiences Bondi Beach dishes up.

On New Year's day, the lifeguards attend to the human debris hanging over from the night before. Amidst the drunk and drug affected is an opportunistic thief with some tall tales to tell.

It’s a bad day for kids at Bondi, with one young boy losing his belongings and another swept out to sea. Meanwhile, Hoppo sends some of the team to train at the international capital of waves, Hawaii.

Trainee lifeguard and Bra Boy member Jesse Pollock fractures his spine when he is dumped by a huge wave; meanwhile Jake rescues a beginner surfer being smashed against cliffs.

In between rescues and shark spottings, Head Lifeguard Hoppo must decide if trainee Max has earned the right to become a fully-fledged lifeguard.

A surfing collision results in a deep water spinal rescue, and surf rage breaking out on the shore. Lifeguards must work out who's at fault. Later, a man is rescued with no pants.

Bondi is a party town, and her night of nights is New Year's Eve. 15,000 revellers descend on the beach front for the Shore Thing Concert. At 5am the following morning lifeguards arrive to deal with the drunk, drug-affected, and disoriented, intent on going for a swim. There are 2 thousand people on the beach and not a towel in sight. The lack of swimming attire is of little concern to many who strip naked and welcome in the new year with a bit of skinny dipping. Mid-morning an emergency call comes in that a boat is taking water at the base of cliffs north of Bondi. Rushing there on the jetski Mouse and Ben arrive to find 23 year old Anthony in a hand built boat he bought on Ebay for two dollars and fifty-five cents. New Year's Eve was his maiden voyage - watching fire works in the harbour, but things went wrong when he decided to head for open water. Partygoers continue to swim as Deano does his best to persuade them to stay on dry land. Next a call comes in alerting lifeguards to a boy with a broken leg in the skate bowl. The steep sides of the bowl are more than ambulance officers are prepared to deal with, so lifeguards are left to move the clearly distressed 15 year old patient up to flat ground. As the end of the day comes to a close, a rescue of a different kind gets underway. A car is bogged behind the surf club, so Harries enlists the lifeguard buggies to pull it out of the mud, with the support of an unlikely team of helpers. Bondi ushers in the new year with the weird and wonderful, plus a few traps for unsuspecting visitors.

In the midst of party crowds, drugs, alcohol, rescues and first-aids, a drunken pro skater cuts his hand open and a woman reports her 70 year old mentally-ill brother lost on the beach.

An 18-year-old man breaks his leg and Maxi uses a mobile phone tracking device to locate a thief.

Lifeguard 'Harries' plans to propose to girlfriend Emily high above Bondi in a chopper, and needs the team to make a huge 'Marry Me' sign in the sand.

A foggy Australia day has reduced visibility to mere metres, forcing lifeguards to close Bondi Beach. Alcohol is a problem and a man is presented to lifeguards with a huge gash to his arm.

Just 16 years of age, Coffs Harbour trainee-lifeguard Temika Wright continues her exchange program at Bondi. Deano sees an opportunity to test the youngster’s skills when he sends her out for a boy and girl caught in a rip at North Bondi. Quick to get there on the rescue board, the trainee is unsure of what to do next, and makes a decision that could have tragic consequences. Lifeguards know they must take Temika into the fold and decide to include her in routine fitness training. But she’s unsure of what to do when invited to compete in the annual Lifeguard Iron Man Race. It’s the pinnacle event for an all-male squad. The temporary rookie isn’t relishing the opportunity to compete, especially when the surf is forecast to reach over 3 metres. The race starts with a run between Bondi and Tamarama beaches, then a swim around a very dangerous cliff face to Bronte Beach, followed by a board paddle back to Bondi. All is going to plan in the handicap event until the relentless surf at Bronte brings the board paddle to a virtual standstill. Whoever breaks through will likely win, but for now most lifeguards are just struggling to survive. The threat of injury is constant, but becomes a dramatic reality when lifeguard Ben Sutherland crawls ashore barely conscious. Struck in the head by a competitors board he is unable to see in one eye and fears his jaw is broken. An ambulance is called and lifeguards attend to with one of their own for the first time. It’s the most difficult and intense Iron man race in lifeguard memory

Reidy was an overweight kid who didn't grow up surfing. Today he's overcome harsh criticism to become a lifeguard; meanwhile, up at the tower a BMX rider has a fractured cheek and broken nose.

It's the hottest day ever on Bondi as the temperature soars to 45.8 degrees. Tempers flare in the heat and a fight erupts.

Australia's IronMen and Women help the lifeguards compete in the fiercest lifeguard race yet. Plus new recruit Tyson is put to the test and police are called when a man threatens a surfer.

There has never been a rescue at Bondi Beach like this in 70 years as tragedy strikes when two unconscious patients are discovered in the water. The lifeguards will need to act quick to save lives.

Chappo is conflicted when he catches a young bag snatcher; Whippet and Reidy treat a woman found face down and unconscious in the water; a skateboarder dislocates his ankle in the skate bowl.

There's a big swell heading for Bondi and the fearsome rips will be working overtime. But what's dangerous for mere mortals is a playground for the elite watermen as they take to the water on their rescue boards at the start of the day. A morning of fun turns out to be the busiest day of summer with thirty-five rescues conducted in a frantic five-minute period. If the big swell isn't dangerous enough the wind has washed in thousands of bluebottles. The beaches are under attack as tourists scream in pain from the many stings. Then there are the perverts on the sand to contend with?(Summary from Ten.com.au - Permission granted)

A miscommunication during a serious rescue could cost two people their lives. Mouse and Jess must overcome their anxiety and administer adrenaline to a young woman suffering from an allergic reaction.

On the hottest day of summer, Hoppo rescues an international student drowning in waist deep water metres from shore, while Evo finds a semi-conscious woman being carried out of the surf.

A rough tackle brings a game of beach gridiron to a shuddering halt. Is it the intense pain or five hours of drinking that leads to the patient leaving a mess on the promenade?

A man is dragged unconscious from the water and without a pulse. Reidy and Beardy attach the defibrillator and oxygen mask and begin resuscitation. Can the boys bring him back?

Harries and Jake head to North Bondi where they find a man dazed and confused after suffering a brutal attack. And, who will come out on top in one of the hardest lifeguard challenges of all time?

The temperature is rising and there are tens of thousands of people on the beach when the lifeguards are called out to a large rescue. Later, can Harries play cupid and find a partner for Singlets?

It's been a year like no other at Bondi Beach. Beach marshals work with the lifeguards to check numbers and enforce social distancing, but it's a challenge the lifeguards are only too keen to accept.

It's Christmas time tonight on Bondi Rescue but the festive spirit turns deadly with a nasty combination of alcohol and surf.

Valley of the Wolves