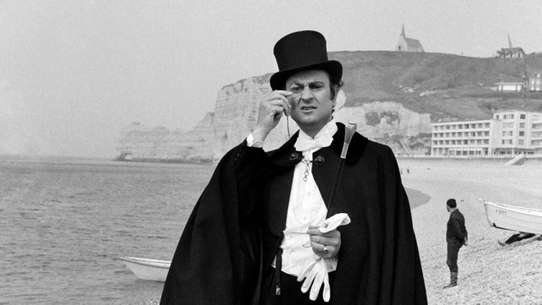 The BEST episodes of Arsène Lupin

Arsène Lupin is a French TV show which was co-produced with German, Canadian, Belgian, Dutch, Swiss, Italian and Austrian TV stations. It is loosely based on the novels by Maurice Leblanc. Georges Descrières' portrayal of Arsène Lupin showed more similarity to Graf Yoster than to Maurice Leblanc's original. He behaved in the first place as a perfect gentleman who never got angry. He was always relaxed, because whatever could possibly have bothered him in daily life was taken care of by his butler. It wasn't questioned how he had come to his financial independence although the series sometimes discreetly implied that he was a professional criminal. Besides rescuing damsels in distress Lupin took on (other) criminals, competing with their wit and intelligence. Either he stole paintings from rich people who had to be considered white-collar criminals or he acted as a detective who derailed criminal schemes. However, when he was attacked, he could defend himself effortlessly by using elegant jujutsu methods. (Graf Yoster left such matters to his butler.) Among the guest stars were German actors such as Günter Strack and Sky du Mont. Jean-Paul Salomé said in his commentary on the DVD version of his film Arsène Lupin (2004) he had liked this series as a child. German TV, one the investors, would broadcast the show eventually between 18:00-20:00 o'clock because it was only allowed to show commercials within that timeslot. For them to get a financial return on investment the show had to be appropriate for families and also for children who would watch it alone. Subsequently it was nearby to ask to defuse and flatten some of Leblanc's plots in order to avoid possible complaints that could force the station to broadcast the show beyond the "Vorabendprogramm".

Gilbert, a member of his organization considered by Lupin as a son, incites him to rob the house of the wealthy Dautrecq. But Gilbert actually wants to recover a crystal stopper, just like a third thief, Sebastiani. This one, hollowed out, contains a list of high personalities implicated in a huge financial scandal. Dautrecq uses this list to blackmail them and ensure its power. He also wishes to obtain the favors of Clarisse de Mergy, mother of Gilbert, whom he coveted since his youth. The burglary goes awry when Sebastiani shoots down a servant present on the scene, while being seriously injured himself. The police intervened but Lupin managed to escape. Captured, Gilbert is accused of the murder, Sebastiani having died from his injury. To reveal the truth and save Gilbert from the guillotine, Lupin desperately needs to grab the list. Then engages a duel between him and the terrible Dautrecq, of which he however ends up piercing the secret...

Shots are exchanged between police and criminals, who have just robbed a bank. Commissioner Guerchard is responsible for the case. An obviousness according to him: the blow was committed by Arsène Lupin in person! The prefect of police has a plan: to make believe that the investigation is always carried out by Guerchard, whereas it is entrusted in secret to a large policeman whom Lupin does not know. The man in question is named Victor, from the Brigade Mondaine.